UNIVERSITY PARK, Pa. – When she was three years old Arizbeth Miguel Jimenez moved from Mexico City to Philadelphia, not knowing that her idea of identity would become a mixture of Mexican culture and Philadelphia/American culture.

“My family came to the United States in order to have a better life,” Jimenez said. “My parents couldn’t afford to eat or just to sustain their family.”

As a Deferred Action for Childhood Arrivals recipient (also known as DACA), Jimenez is allowed to get a license, become eligible for a work permit in the U.S., and go to college. However, being a DACA recipient has its disadvantages.

When applying for DACA at age 16, her family hired a lawyer. “The lawyer told my dad that if I do get DACA, then that’s great. If I don’t, [then] my name and my fingerprints are going to be in the U.S. system,” Jimenez said. “So, that allows them [the U.S. Immigration and Customs Enforcement] to find me easily and be able to deport me if they wanted to.”

DACA is an American immigration policy that allows undocumented children under the age of 16 who’ve been brought into the United States to receive a renewable two-year period of deferred action from deportation.

As part of DACA, recipients are restricted when it comes to higher education. They are eligible to attend college in the United States, however federal aid is not available.

Jimenez was offered a full-ride scholarship to go to Pennsylvania State University. Then, the university learned of her DACA status.

“My high school advisor called me and he said that they had to take the scholarship away,” Jimenez said. 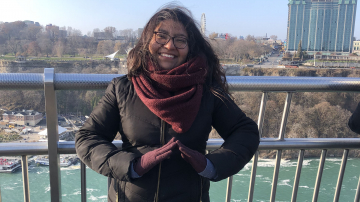 Jimenez would be the first person in her family to attend college. her parents decided to take out a loan and she is now a year away from graduating. She has made her presence on campus well known.

In the fall of 2017, Jimenez became a sister of Lambda Theta Alpha Latin Sorority Incorporated., the first and largest Latin sorority in the nation.

“I joined Lambda Theta Alpha because when I first came to college, I felt lost, I felt like I didn’t belong,” Jimenez said. “But, then I met sisters and they were that support system that I never had since no one in my family knows what I go through as a college student.”

Lambda Theta Alpha Latin Sorority Incorporated., was founded on December 1st, 1975 at Kean University as a support system for Latinas when the amount of Latinx college students began to increase.

She has held several positions while a sister of Lambda Theta Alpha, she currently is the president.

“[Being president], I really had to learn how to separate business and sisterhood. You can’t please everyone.”

Between juggling five classes, working at the different Commons Desk on campus, and being the president of her sorority, Jimenez has a lot more on her plate than she anticipated.

Being a Latina at Penn State is not easy, and Jimenez was able to find a home away from home at Penn State with Lambda Theta Alpha.

Ariana Rosa is from The Bronx, New York, graduating in Spring 2020. She is a Broadcast Journalism major with a minor in Spanish. During the summer of 2019, Ariana interned at CBS2/WLNY TV, where she gained experience producing live digital newscasts with the CBSN NY team. While there, Ariana acted as the Anchor for the annual summer intern newscast. While at Penn State, Ariana got the opportunity to work as a Staff Writer for Her Campus PSU and Managing Editor, of ¡OYE!: Penn State’s First Bilingual Latinx Newsletter.

Ariana also participated as the Social Media and Webpage Manager for Puerto Rican Student Association, where she contributed to the design and production of the organizations first website. Ariana is an aspiring CEO of a multimedia digital news outlet that gives a voice to the underrepresented Latinx/Black communities. She has always had a passion for story-telling, and believes no voice should go unheard.

A Place for Everyone