From the Italian Market @ the DNC

PHILADELPHIA – As the Democratic National Convention comes to a close, would-be voters, browsing the brimming stands the landmark Italian Market on Ninth Street yesterday, said they were looking to presidential nominees Donald Trump and Hillary Clinton to provide confidence on a variety of issues in the few months leading up to November.

“That we survive this election, that’s what I’m hoping for as a mother of three,” said Cookie Cilibert, co-owner of Betty Ann’s Italian Market Florist, standing behind a wall of vibrant bouquets. 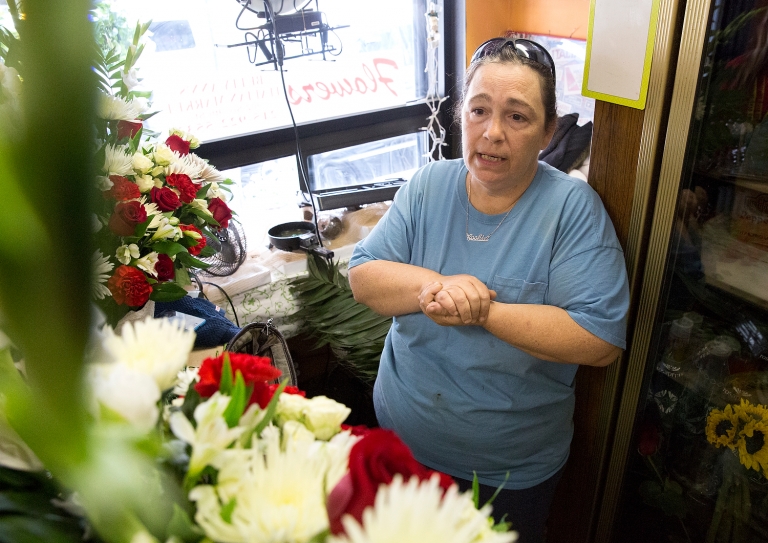 Cookie Cilberti, from Philadelphia, talks about the hardship she's been through as a small business owner in her shop, Betty Ann's flowers, during the Democratic National Convention in Philadelphia on Thursday, July 28, 2016. Cilberti works with her aunt in the flower shop and has been doing it for 26 years. (Photo by Antonella Crescimbeni)

Cilibert said she is concerned that her children will be in debt for the rest of their lives because of student loans. She said she also has her own economic issues.

Ashley Torelli, a 20-year-old Philadelphia native, said student debt is not the only education issue that is important.

“The root of the problem is public education,” she said. “It needs to be better funded and less focused on standardized testing.”

Ali Saaby, who arrived in the United States in 2003 from Lebanon, said he tuned into the national conventions these past weeks hoping to hear the issue of immigration further addressed.
“I’ve been trying to get my citizenship for the past two years and every time I call they say, ‘We’re still waiting,’” Saaby said, shopping for fresh seafood with his son.

Terry Wetzel, 64, of Allentown, said the new president must deal with the Islamic State and the refugee crisis. He said neither Clinton nor Trump have proposed anything substantive.
“So many times during the election process, all you are hearing is one saying something bad about the other, but not so much on what they will be able to accomplish, if they do get in,” Wetzel said.

Wetzel’s daughter, Rosalie, 22, said she wants the candidates to focus on the environment.
“It doesn’t seem like there’s much focus on environmental issues,” she said. “There’s money that goes into fracking and things that are bad for the environment.”

Karina Daum of Hackettstown, New Jersey, said that a President Trump or President Clinton will have many issues to address, including health care and homelessness.

“We’re so close to the election,” she said, “but there’s so much that needs to be touched on and rebuilt.”