The brothers of Phi Kappa Tau fraternity at the Pennsylvania State University will tell you that Gary Bodkin is more than just their house cook and manager. Bodkin is a man of many talents and unique interests with a repertoire of stories so large that he can talk a brother's ear off for hours. According to Jake Alderoty, Bodkin "is an all-around Renaissance man."

Bodkin was born in Ohio and moved to State College at age six when his father began working at Penn State. Bodkin attended Penn State as an undergraduate and majored in Recreation, Parks, and Tourism Management. Bodkin was a walk-on member of the fencing team and a brother of Theta Delta Chi fraternity.

While living at his fraternity house, Bodkin contracted food poisoning several times from house meals. Bodkin vowed that if he was ever given the opportunity, he would make sure that no fraternity house was subject to as sickening food as his house was. Twenty-five years later, Bodkin is making good on his promise through his work at Phi Kappa Tau. 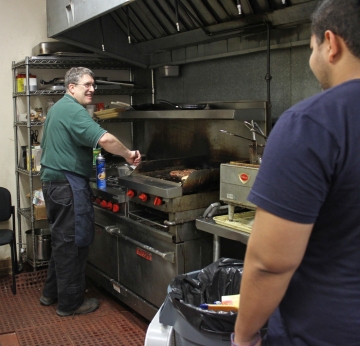 Bodkin has loved cooking ever since his mother taught him how at age eight. By 14, he was making meals in mass quantities at Boy Scout camp. After graduating from Penn State, Bodkin managed restaurants, department stores, a Christmas shop and a hotel, in addition to earning a master's degree from Syracuse. Eventually, Bodkin returned to State College in 2005.

He first worked as the cook at Kappa Delta Rho fraternity before beginning work at Phi Kappa Tau in 2007.

At Phi Kappa Tau, Bodkin spends seven hours a day in the kitchen making custom lunches for each brother and then a family style meal for dinner. For Christmas, the brothers gave Bodkin an apron emblazoned with the title "The Grillfather" in honor of his dedication in their kitchen.

However, not all the brothers are fans of Bodkin's cooking. Some brothers think the meals are redundant, with menus like Taco Tuesday being served several weeks in a row.

Nate Lovette one of Bodkin's biggest fans in the house.

When not in the kitchen, Bodkin enjoys riding motorcycles, collecting arrowheads and shooting. As a teenager, Bodkin perfected his shooting skills at the Recreation Hall rifle range, which no longer exists. Bodkin is a National Rifle Association expert and was an Army sharpshooter.

Even though Bodkin and the brothers may drive each other crazy at times, the brothers still appreciate Bodkin’s work at the house and his seemingly implausible stories.

“When I first met Gary, I thought he was a real normal guy, just a fraternity cook, all he did was come here, make food, go home," said Ryan Truitte. "But it turns out he's quite a bit deeper than that.”

Bodkin has worked with stained glass since 1986 when he approached the owner of a Corning, New York, stained glass shop about purchasing his business. After learning the trade from the shop owner, Bodkin managed the shop until 1997.

Today, Bodkin says he has more than 1200 pieces of art in circulation throughout Pennsylvania, New York, and Ohio. He restores and repairs stained glass in the Centre County area, including at six Penn State fraternity houses and many churches.

Sara is a student at the Pennsylvania State University and will graduate in May 2013 with a degree in Visual Journalism and minors in Geography and International Studies. In June, Sara will begin her two-year commitment as a 2013 Teach for America corps member teaching secondary mathematics to students in Jacksonville, Florida.

Orso relishes the responsibility as the Collegian’s managing editor