McKenna Kimmel is a Penn State senior majoring in Chinese and finance. The more interesting fact is that she is also the founder of Go State Designs, a small business that upcycles thrifted clothing by painting, sewing and embroidering to create apparel made for Penn State football game days.

Like many people in college, Kimmel said she loves fashion and wants to use her creativity to make an impact, especially to reduce fast fashion.

“All the materials I got are thrifted and second hand,” Kimmel said. “It is another way to breathe new life into old clothes.” 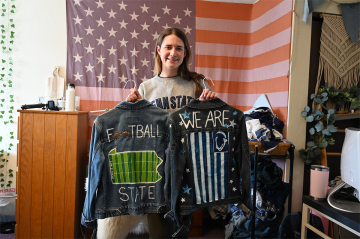 McKenna Kimmel shows two denim jackets she upcycled with paint for PSU football games, in her room on April 9. Photo by Annie Shih

In the beginning, Kimmel said she saw a lot of college students wearing jean jackets, so she began to upcycle jean jackets for Nittany Lion football fans. She said she continues to find inspiration by watching what people are wearing, on the street and on Pinterest.

Kimmel said she used to sell her  clothes on Etsy and other platforms. Now she is only using Instagram because she said it is easier to manage sales on one platform.

Before the pandemic, she also parrticipated in pop up events, such as Pop Up Avenue and selling in front of Doggie’s Pub on game days.

School still goes first for Kimmel even though she is running a small business as a student. She said an ideal day for her is to wake up early, start on her schoolwork, and then transition to her clothing business for the rest of the day.

“The reason why I decided to do Go State in college is because it is super versatile, and I can do as much as I want at different times and it really fits my schedule,” Kimmel said.

Kimmel said even though she is graduating this year, she hopes to continue selling her clothing on future football game days.

Kimmel was a competitive archer for about seven years. She said she started her first fashion company was because she noticed that there was lack of women’s clothing for archery. Now, since Kimmel doesn’t shoot anymore, she has stopped operating Quiver Archery Design.

Annie Shih is an international student from Taipei, Taiwan. She is majoring in print and digital journalism, and has been writing for The Underground since junior year.