At 20 months old Messina was a happy toddler who attended preschool at Penn State’s Bennett center.  After coming down with a fever that lasted a week and developing odd red bumps; Messina’s parents took her in for a checkup.  That day her parents were told to take her to Penn State Hershey Children’s Hospital where there was a room set up for their arrival.

Messina was diagnosed with Acute Myeloid Leukemia and underwent six months of intense chemotherapy. Due to her young age and the severity of her cancer, doctors at Hershey prepped the Messina family for the worst. Stressing that her chances of survival were low, Isabella’s parents filled up multiple photo albums of pictures of their little girl. 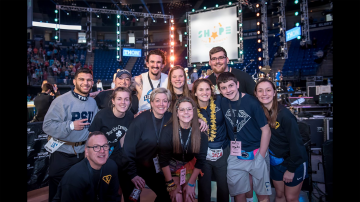 Messina celebrated her second birthday, Easter, and Thanksgiving in the hospital.  During their stay in Hershey, the Messina family became connected to The Four Diamonds Foundation and Penn State THON.   After Isabella was declared in remission from cancer, the family was paired for THON with Penn State’s Student Athlete Advisory Board.

Cancer is not over when patients leave the hospital.  Annual scans must be clear for five years after leaving treatment, patients are considered cancer free.  Messina had several clear scans that allowed her begin elementary school.  In the fall of Messina’s first grade year, four and a half years into remission; her mother Renee Messina got a call from doctors in Hershey instructing her to pick up her daughter from school and bring her to the Hospital right away.  Messina who was seven years old, was called to the school office and told to leave her belongings. She would not be coming back to school that day.

Getting in the car, Messina was quick to figure out what was going on.  Upon arrival to the hospital the Messina’s got the news they feared, their daughter had relapsed.  This time she was diagnosed with Acute Lymphoblastic Leukemia.  This diagnosis baffled doctors because pediatric patients are typically diagnosed with Acute Lymphoblastic Leukemia before Acute Myeloid Leukemia.

Upon Messina’s relapse doctors decided the best plan of action was a bone marrow transplant.  Fortunately when Messina’s younger brother Jack was born two years prior to her relapse, her parents saved umbilical cord blood for the possibility of a transplant in the future.  Siblings only have a 25% chance of being a match for the transplant for their sibling needing a transplant, but Jack was a perfect match for Isabella.

Following the transplant Messina had to spend 100 days in or near the hospital. This meant Messina would miss the bulk of her school year and begin homeschooling.   Messina’s first grade teacher Pat Schoffner sent materials to Hershey for her to stay up to date with her classmates and keep her academically developing.  After the Messinas were allowed to go back home to State College, Schoffner came to Messina’s house and homeschooled her until she was cleared to go back to school with her peers.

When she was eight, Messina began going to Camp Cando, a summer camp for kids who have had cancer or are currently in treatment. With pediatric cancer treatment, secondary cancers and adverse treatment effects are common.  By making Camp Cando exclusively for cancer patients, Messina found support group that is unmatched.  Messina says Camp Cando allows patients to feel normal even after losing a limb or gaining new scars because “nobody asks why you look the way you look because we all know it's cancer.”

Since her original diagnosis, Messina has also attended Penn State THON every year since 2003.  Both these communities have given her a support system outside her family and inspired her drive to give back to those that gave to her.

Today Messina is 12 years post Leukemia treatment.  However intensive radiation therapy can cause adverse effects for the patient’s lifetime.  Since her relapse Messina has had thyroid cancer as a result of her previous treatments, as well as bilateral cataract surgery.

Messina is a member of Springfield benefitting THON as well as a Special Events committee member for THON 2020, which will be her 17th year in attendance.  After seven years of mini-THON involvement, Messina hopes to be heavily involved in all aspects of THON during her time at Penn State.   In her first semester, Messina has enjoyed the opportunity to support other Four Diamonds families through their journeys with cancer.  Although Messina’s cancer journey is not over, she believes she survived cancer three times for a reason; and has dedicated herself to giving back to THON and Camp Cando and supporting those who have supported her.


Messina’s relapse in first grade meant she would miss the bulk of her school year, yet she had a teacher who went above and beyond.   Over the course of Messina’s relapse her teacher kept her desk filled at school and aimed to keep her present in the classroom; despite her staying in Penn State Children’s Hospital. Between visits, gifts, cards, silly videos, and homeschooling, Messina’s teacher has remained part of her life through her treatment and beyond.