Do not be shy about presenting your credentials, and stand firm in your beliefs, said Lancaster, Pennsylvania, Mayor Rick Gray.

In a series of interviews on Monday at the Pennsylvania delegation’s breakfast at the Doubletree Center City, seasoned politicians – enthusiastic Democrats, all – suggested ways that would-be Democratic presidential nominee could deal with the issue of “trust” that has plagued her campaign.

“This week will be a big beginning in presenting the real Hillary Clinton,” said Gray, a Clinton delegate. “They need to present her life story, the people that support her, what she has stood for in her life and how she has done so.”

The image of Clinton being pushed forth by Republicans and other opponents doesn’t agree with what she has actually done in her life, said Gray, adding that distorting an image is easy to do with someone who’s had such a long political career.

“She has all the scars of someone who has been at the center of world power for 30 years,” Daniel Doubet, a Sanders delegate from northcentral Pennsylvania, said.

Doubet said he hopes to see her transform those scars into an advantage by reminding the nation of her experiences in a way that demonstrates her ability to get things done and build herself into what she wants to accomplish.

She needs to boost the nation’s faith in her capability by highlighting her commitment to idealism, while also emphasizing the importance of pragmatism, Doubet said, following a rousing breakfast speech from a surprise guest, U. S. Sen. Cory Booker.

In order to do so, Clinton needs to present a commonsensical plan with facts to back it up, said Frank Dermody, a Clinton delegate from Allegheny County and minority leader of the Pennsylvania House of Representatives.

“I’m hoping she can lay out a program of positive goals for the country, including how to educate our children, put people back to work and more,” said Dermody.

In addition to illustrating her abilities, Clinton needs to show transparency regarding recent transgressions, said Fox, a Sanders delegate from Lancaster County.

Confident that Clinton can use this week as a stage for regaining voters’ trust, Sharron Cooks, a Clinton delegate from Philadelphia, sees the nation’s lack of confidence as a misconstrued product of Clinton’s long political career. 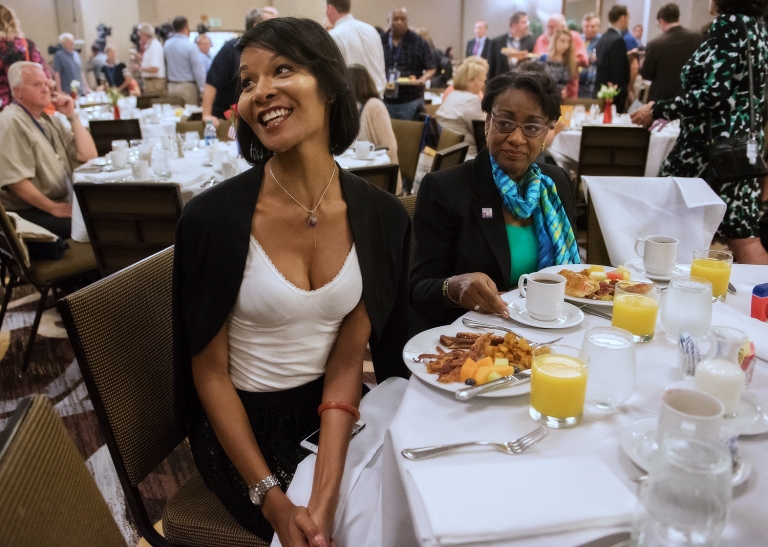 Sharron Cooks, an at-large delegate for Hillary Clinton, left, and Valerie McDonald Roberts, a Hilary delegate, mingle with other Pennsylvania delegates and politicians at the first Pennsylvania delegation breakfast on July 25, 2016 in Philadelphia at the Democratic National Convention. (Photo by Gabrielle Mannino)

Some of Clinton’s views have evolved, Cooks said, but those changes do not mean she cannot be trusted.

“She hasn’t been given room to adapt her point of view,” Cooks said, explaining Clinton stretching her ideals to be more progressive shouldn’t be seen as inconsistent but as listening to what the people want.

Though delegates are looking for Clinton to be active and forthright, Brian Fallon, press secretary of Hillary for America, said he expects the GOP to use this misperception of Clinton as a “unifying theme.” He said it was the only thing Republicans could “hang their hat on.”

Even as the Pennsylvania Democratic delegates were meeting for breakfast, the state Republican Party announced it was putting up anti-Clinton billboards along I-95 near the Philadelphia International Airport and along the Pennsylvania Turnpike near Plymouth Meeting.

The billboards say Clinton is “unethical, untrustworthy and unqualified.”

At a news conference later in the morning at the Pennsylvania Convention Center, Democratic officials said they were confident in their candidate.

Said Fallon: “This coming week is going to be spent laying out the contrast about who Hillary Clinton is in this fight for versus Donald Trump, who has been a fraud when it comes to actually sticking up for working class people.”