Story/Video posted May 3, 2019 in News, CommMedia in Puerto Rico by Sydney Herdle

The Old Ponce Fire Station dominates the town’s central square, across the street from city hall. Video by Sydney Herdle

A unique landmark of Puerto Rico sits in the heart of one of the island’s most-populous and culturally-rich cities: Parque de Bombas de Ponce, which translates to Old Ponce Fire Station.

The museum’s eye-catching red-and-black-striped paint job and Moorish-style structure makes it one of the most easily-recognizable buildings in Puerto Rico. Its current docent, Jaqueline Aviles, said Parque de Bombas is the second-most-popular tourism spot on the island – second only to the El Morro fort in San Juan – and receives between 50,000 and 60,000 visitors during the tourism high-season.

One of almost 40 registered landmarks on the National Register of Historic Places in Ponce, Parque de Bombas helps the city stand out culturally and historically, Aviles said.

“We try to keep our history more than other areas in Puerto Rico. It’s because for us, history is very important,” Aviles said. 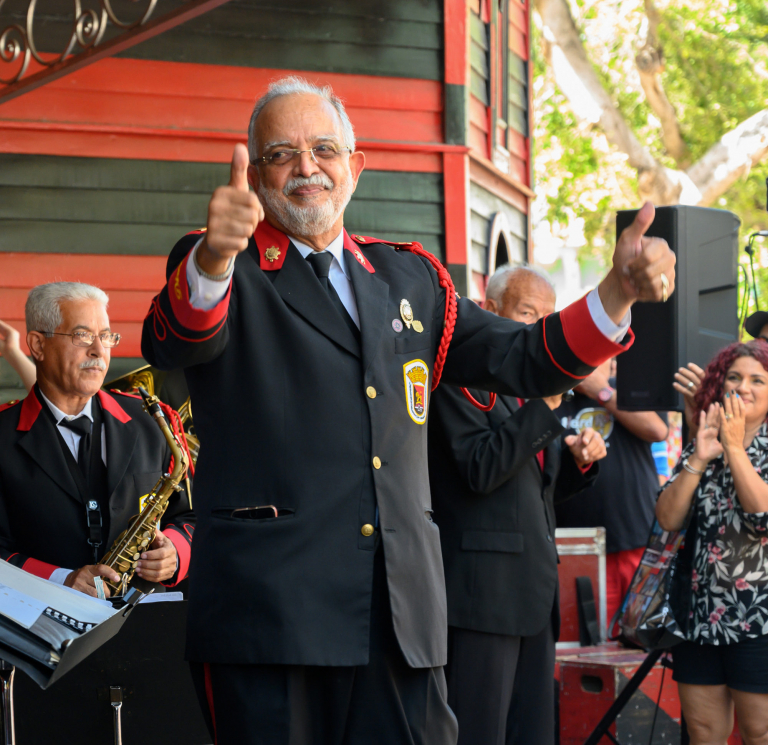 Juan García Germaín, the director of the Ponce Municipal Band, gives a thumbs-up to the audience following their performance at Parque de Bombas during Carnaval Ponceño in Ponce, Puerto Rico on Sunday, March 3, 2019. Photo by Sydney Herdle.

Parque de Bombas also serves as a stage for the Ponce Municipal Band, founded by Ponce firefighters shortly after the fire department’s establishment in 1883. Although the band previously performed regularly in the firehouse, they currently perform every Sunday night just around the corner in front of Ponce City Hall and only occasionally in the firehouse, such as during Carnaval Ponceño.


Parque de Bombas was initially built as a pavilion for an agricultural exhibition in mid-1882, but later became the headquarters for the city’s municipal firefighting company the following year. Not only was it the first fire station established in Ponce, it was also the first fire station established in Puerto Rico and the entire Caribbean, according to Aviles.
The building continued to serve as the Ponce fire department’s main headquarters for over a century until 1989, when it was closed and converted into a museum.

Aviles said the building has only been renovated three times in its history, most recently when it was restored as a museum in 1990. She added that its most recent paint job was in July 2017 – mere months before Hurricane Maria devastated the island – yet the building still stands strong and in pristine condition.
aces. 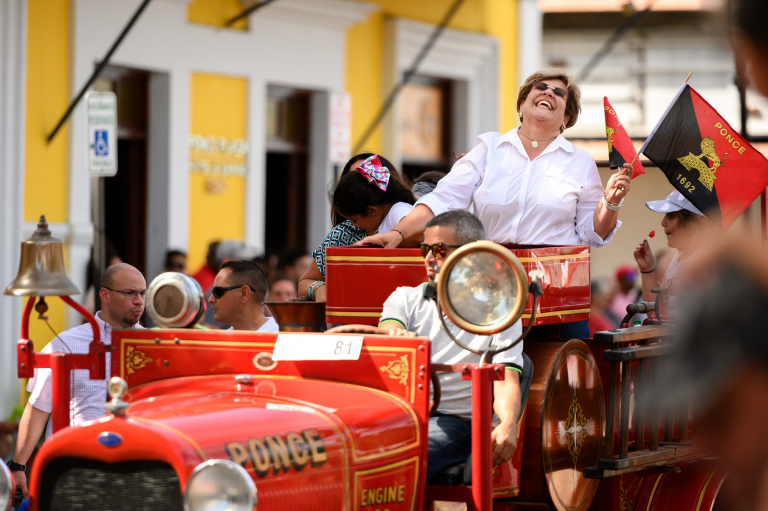 María Meléndez, the mayor of Ponce, Puerto Rico, laughs on the back of an antique firetruck during the Carnaval Ponceño parade in Ponce on Sunday, March 3, 2019. Photo by Sydney Herdle.

The firehouse stands out in Ponce’s downtown Plaza Las Delicias, sitting next to the plaza’s Fuente de los Leones, or “Lions Fountain,” and directly behind the Catedral de Nuestra Señora de Guadalupe, or “Cathedral of Our Lady of Guadalupe” – also listed on the National Register of Historic Places.

Although the firetruck sits in the museum most of the year, Aviles said it is still in “perfect” working condition; it navigates the streets of Ponce once a year to lead the parade for Carnaval Ponceño – a week-long celebration that coincides with Mardi Gras – with the city’s mayor in its bed.

On display leading up to the second level is a painting that depicts the fighters in one of the city’s worst fires in its history. Aviles explained that on Jan. 25, 1899, a large fire broke out near the current site of Ponce High School when a firefighter flicked a cigarette butt into a gunpowder and ammo supply area for the North American military. The seven firefighters and one civilian featured in the painting risked their lives to contain the fire and ultimately saved the city from burning down.

The upper-level houses various tools and uniforms used by Ponce firefighters over the years, as well as portraits of some of the department’s lieutenants and colonels and the second of the two small-scale replicas of the firehouse.
One of the most notable displays in the museum is a collection of lion figures adorned with a variety of paint jobs. Aviles said 15 lion figures were painted by 15 different artists several years ago, each one representing a different meaning for the city of Ponce.

The lion serves as the symbol of Ponce in honor of Juan Ponce de León, the first governor of Puerto Rico. Although most of the fifteen lion figures are currently on display in the museum, some sit in other landmarks across the city.