Story posted May 1, 2015 in News, Hong Kong by Emily Chappell 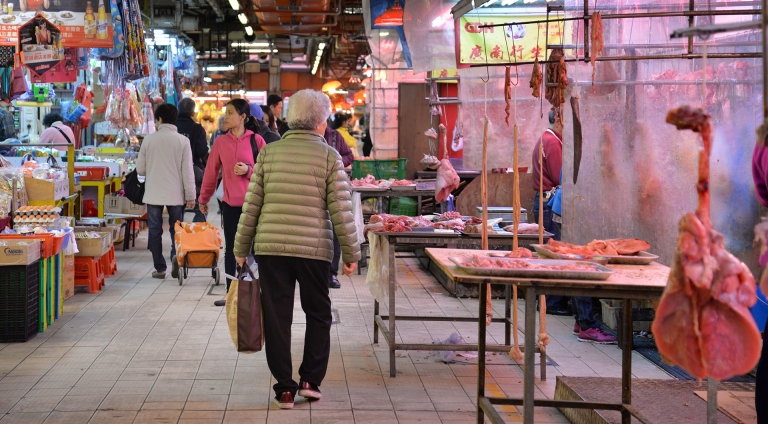 The Shek Kip Mei Estate Market is typical of Hong Kong wet markets where a shopper can find tube socks on one side of the aisle and custom meats on the other. Photo by Emily Chappell


HONG KONG -- The smell of meat and fish, both raw and cooked, is overpowering even on the approach to the Shek Kip Mei Estate Market. Raw meat, from beef to pork to poultry is laid on tables in stalls along the winding aisles. Pig tongues and pig feet hang off the sides. 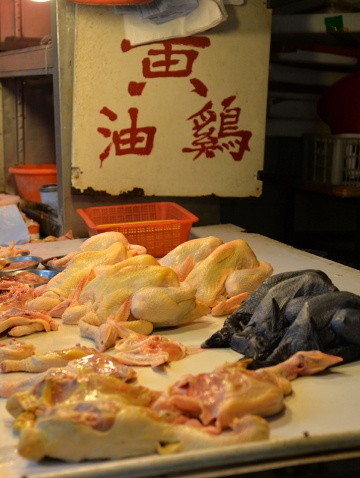 Poultry is for sale in the stall operated by Kwok Yau in the Shek Kip Mei Estate Market. Photo by Emily Chappell

The market is nestled within a building, almost hidden at first glance. It sits among tall public housing buildings, rows and rows of apartments towering overhead. Situated on a corner of a street block with multiple entrances around the building, the Shek Kip Mei market lets passersby catch only glimpse inside.

Live fish flop and splash in bins of water. Others, ready for cooking, are spread on tables for shoppers to inspect. Clothing stalls are not far away, offering socks or belts and purses.

Haggling is the reality of retail pricing here. Words fly furiously back and forth as buyers poke, prod and argue for a lower price while sellers, offended that anyone could find fault, vigorously defend their goods. The occasional swear word floats out from the back of a booth, met with the rhythmic thwack of a butcher’s cleaver.

The market is alive, emitting a constant hum as shoppers make their way around.

Shek Kip Mei is one of Hong Kong’s wet markets – so called because the seafood, meat and poultry on sale require that the floors be constantly washed and rinsed. Long a symbol of the bustle and noise Hong Kong’s crowded urban landscape, wet markets may be facing a threat more serious than competition from supermarkets or restrictive health regulations.

It is Hong Kong’s prosperity that may make the wet markets a thing of the past. 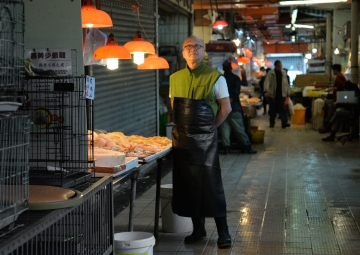 Kwok Yau has made his living in the chaotic bustle of Shek Kip Mei market for the past 30 years, earning enough to support his family, and educate his son and his daughter, who now lives in Boston.

But Kwok Yau, 65, is determined to be the last in his family to earn a living in these crowded alleys, standing in a stall from dawn to late afternoon selling poultry.

The people with jobs like those who run stalls in markets like Shek Kip Mei are “not so smart,” he says. Life in the wet market is too hard to provide “the good life” that he wants for his children.

Bee-Yan Roberts, a professor of economics and Asian Studies at Penn State, said that in advancing economies, occupational aspirations change — away from those that might be needed to run a small retail business to those that require technology and digital savvy.

“If you have technological skills [and] if you have information-intensive skills, you are going to do much better because there will be a greater demand for your services,” she said. “As change happens, you will have people moving between, especially moving away, from more traditional sources of work to things that are more technologically intensive. That’s just part of the growth process when it happens in these countries.”

Very few people, including the children whose parents work in a trade, want to get involved in these types of traditional jobs anymore, Roberts said. And parents, especially if financial situations aren’t strong at home, are often looking for children to head out into lucrative fields. In this day and age, that may be in business, information or technology she said.

On top of that, Roberts says, more familiar economic pressures may seal the fate of the wet markets, once an essential element of Honk Kong’s thriving street life.

But if people see grocery stores as a good or even better substitute, shopping that is convenient with more standardized prices and less bargaining, both demand and supply are gone, and markets will disappear.

“If it’s just pure demand and supply, generally you’re going to find them phasing out,” Roberts said. “And in most countries that are growing very fast, that has happened.”

Some residents in the bustling city of 7.2 million are still shopping in wet markets over standard grocery stores. Some believe they can find fresher food options and better deals.

April Madjos, a domestic worker for a family in Hong Kong, said her employer has her do the shopping for the family at wet markets.

Madjos, 25, said she has been working for her family for nearly two years. Her employer likes her to shop at wet markets because products are often cheaper, she said.

In Hong Kong, there are two major types of markets that provide food produce, Tak Man Ng, a lecturer in the Applied Science Department at Hong Kong Institute of Vocational Education, said via email. The first are privately owned markets, where stall operators have contract relationships with the owners. Public markets, which include wet markets, are run by local authorities, he said, and have stalls that are leased.

Successful bidders for leases enter into agreements with the authorities, he added.

But these markets aren’t just a place for locals looking for lower prices and fresher products to shop.

Shek Kip Mei Estate Market, which has more than 300 stalls, has been running for about 37 years, G. Cheng, an official of the property management firm, said.

And in these 37 years, friendships and longstanding relationships between customers and stall owners form. 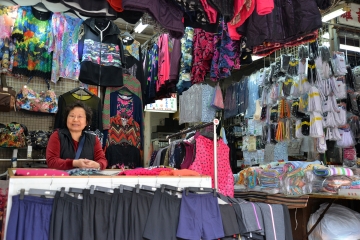 Chun Cheng has worked in this stall at the Shek Kip Mei Estate Market selling clothing for nearly 10 years. Photo by Emily Chappell

Chun Cheng works about five hours a day in a stall selling clothing, something she’s been doing for nearly 10 years. For Cheng, the job isn’t one of necessity. Rather, it’s a social experience.

Spending her days in the wet market gives her something to do and a place to catch up with others in the neighborhood, she said. Cheng said she knows most people in the market and she has the freedom in her job to visit and find out how everyone’s families are doing.

Sitting in the stall Cheng rearranges prepackaged shirts on the table, giving each a turn on top to catch shoppers’ eyes. Next to her sits a friend, the two chatting and laughing as the day progresses. 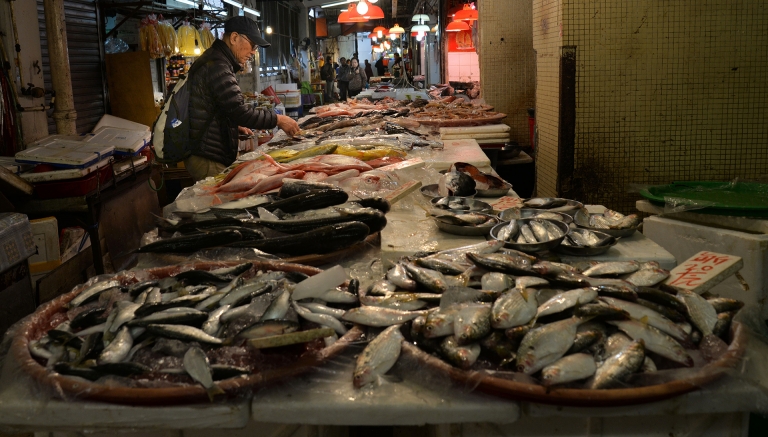 Emily Chappell is looking forward to covering local news as a reporter after graduation. Emily worked for The Daily Collegian for three years, covering performing arts, crime and most recently working as the Opinions Editor.