The Retreat at State College is unlike the typical student housing at Penn State. It’s a luxury living community with a 16,000 square-foot clubhouse that offers multiple amenities like a PGA golf simulator, a fitness center, hair salon, video game room and more. But one of the most appealing perks for college students looking for housing is that it is pet friendly.

Like leasing and marketing manager, Jerrilynn Cipar, many residents are also pet owners – sharing their apartments with hamsters, bunnies and, of course, cats and dogs. Knowing first-hand how important pets are to make you feel more at home, Cipar and her community assistants constantly brainstorm ways to include them in community events.

Because the dogs aren’t allowed outside in the pool area, the Retreat used some of its marketing budget to buy dog ice cream for a party they planned for all the dogs and their owners last summer. Cipar said she wanted to ensure the happiness of her dog-owning residents by providing them with an alternative way to cool off on a hot day. 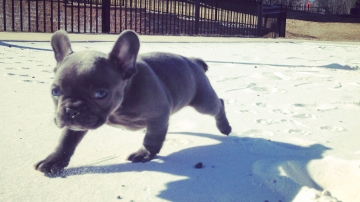 Rocco, a one-year old French Bulldog, enjoys long  walks around the Retreat at State College with his owner. Photo by Kieran Kelly

Second-year resident, Kieran Kelly, is one of the residents who took full advantage of the festivities with his dog Rocco.

“Rocco loved it. It was genius for the Retreat to do that for our dogs because they are glued to us at all times. It’s so common to come study in the clubhouse and bring your dog or to walk them around the property, but the only place we can’t include them is when we are outside at the pool,” Kelly says.

The pool is open for all 588 residents plus their guests, so it’s important to keep it safe and clean at all time. That means absolutely no dogs in the area. Not even Cipar’s.

“We usually plan pool parties in the summer with a DJ, some local sponsors and my husband who always grills out for everyone. It’s a lot of fun…until I remember I can’t include Indy in the action so she stays in the office typically barking and whining because she wants to be outside with me,” Cipar says.

Dogs are welcome everywhere else in the community. Most of them gather in one of the courtyards because the cottages serve as a wall that keeps them from running around in the streets.

“We love the courtyard. The entire area is covered in grass so it’s perfect for the dogs to run around and chase each other. I usually stand on my buddy’s patio and watch our dogs play from there while I catch up with him so it’s a win-win for us,” Kelly says.

Throughout the entire community there are dog waste stations to make it easier for pet owners to pick up after their dogs. It’s highly encouraged since a lot of residents like to spend time outdoors and don’t want to step into an unpleasant surprise. However, there are some pet owners who don’t always take advantage of their resources.

“There are really great and responsible dog owners who live here and then there are those not so great ones," says Cipar. "We have a few who don’t pick up after their dogs and we have to fine them. It’s $25 dollars that we don’t want to charge, but we have to make sure they are following the rules so this place can remain pet-friendly.”

After spending his first couple of years at Penn State on his own, Kieran Kelly decided it was time to add a furry friend to his life. He adopted Rocco, a French bulldog, from a breeder near his hometown last summer.

Palmira Rios is a senior from Dallas,Texas majoring in broadcast journalism with an emphasis on sports and minoring in Spanish. She is a student-producer for In the Game and host for Lady Lion Insider. Palmira aspires to one day be a reporter, talk-show host, or correspondent for any of the four major sports leagues.