Now that mass shootings have become frequent in America, many have debated whether or not gun rights, protected by the Second Amendment, should be changed.

They also wonder if the way mass shootings are addressed should be changed, leading to another debate: what makes an attack terrorism?

Some wonder if it’s a religion, a nationality or an actual act.

Airama Bryant, a Penn State sophomore, disagrees completely and thinks the media and the government have a responsibility in differentiating the two.

She said domestic terrorism should be treated as that—terrorism—and it shouldn’t matter what a murderers religion or nationality is for an attack to be considered terrorism.

She talked about the controversial front cover of a recent New York Post edition.

“It said ‘Muslim killers’ on the front page,” Bryant said. “Why couldn’t they just say it was a shooting?”

She continued to share her thoughts on the Islamic State.

“I think they just use Islam as an excuse as to why they do the crazy things they do, which is disgusting,” Bryant said. “But I just think they’re sick individuals.”

Bryant said that Islam derives from the world salaam, which means peace.

ISIS has become one of the biggest threats to the world in recent years, according to Christian Post.

This was made clear on November 13, when members of the terrorist organization attacked Paris, killing over 120 people and injuring over 350 others, according to CNN. 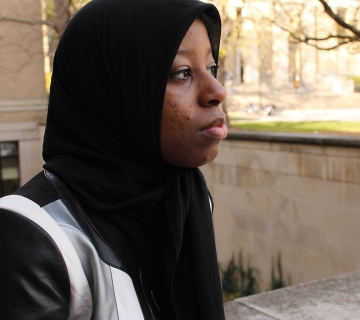 Airama Bryant shares her experiences on what it’s like to be a Muslim, after ISIS— a radical islamic organization- commits more terrorist attacks before the year ends. Photo by Chelsea Friedman

Since then, France and its allies including the United States, have joined together in the fight againt ISIS, in hopes that they will be unable to commit more attacks and therefore be stopped once and for all, according to the New York Post.

In the meantime, the U.S. Department of State has issued a travel warning for all U.S. citizens, according to their website.

The travel alert is said to expire February 2016.

Still, America faces its own modern terrorism, as mass shootings have begun to occur more than ever in the country’s history and almost daily as there have been 355 mass shootings in 2015 alone, according to NBC 12, an NBC affiliate.

The most recent attack was in San Bernardino, Calif. where 14 people were killed by married couple Syed Rizwan Farook and Tashfeen Malik.

The FBI said it is now clear that the couple was radicalized long before their attack.

In November, there was another shooting at a Planned Parenthood clinic in Colorado Springs that killed three and injured numerous others. The shooter was Robert Lewis Dear.

Bryant collects hijabs and has a story behind each covering.

I’ve wanted to be a journalist since I was a child, something I am very proud of because I know I was born for this. Along with my major, I have a minor in History. I aspire to be a news producer and I’m also interested in law school. I’ve written for The Daily Collegian for over three semesters as the state/nation reporter, which is the exact beat I want to cover in my career. My favorite news is hard news, but I also like sports, specifically the NBA and entertainment.