It takes an island: Raising children in Puerto Rico

Story posted May 3, 2019 in News, CommMedia in Puerto Rico by Malia Schimminger 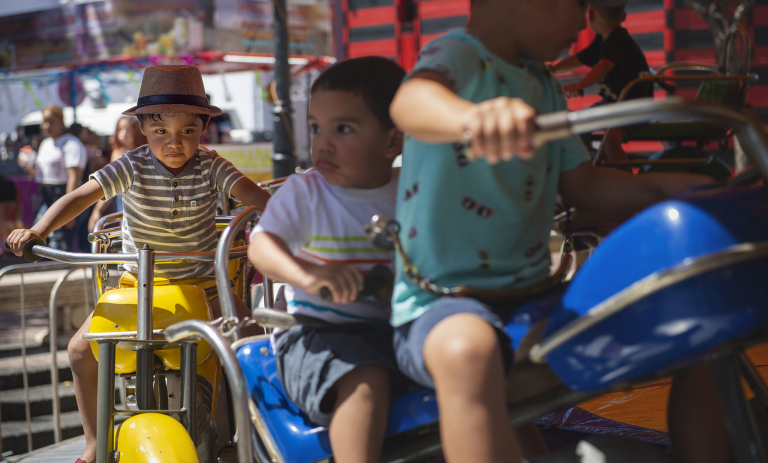 Children pack a ride in Ponce, Puerto Rico, during Carnival. Keeping school-aged kids on the island and in schools has been a challenge for educators since the double blow of Hurricanes Irma and Maria. Photo by Malia Schimminger

In the wake of the disaster, Julia Keleher, then serving as the Secretary of the Puerto Rico Department of Education, began looking for incentives to keep students and their families on the island.

“Anything we can do to create a well-balanced, structured system where supports are reflective and symmetric … that’s a good environment for people to want to be in,” said Keleher during an interview in her makeshift office, a former DIRECTV warehouse in San Juan.

The hurricanes afforded Keleher an opportunity to implement one of the goals she set when she was appointed the previous year: to address the needs of students as complete beings. “It disrupted the system to such a degree that when you turned it back on, you really had an opportunity to have it be a little bit different, and that’s kind of unique,” she said.

Effective April 2, Keleher resigned as education secretary and began serving as an adviser to the department, paid by the Fiscal Agency and Financial Advisory Authority, which oversees the money allocated to governmental departments and how that money is spent. 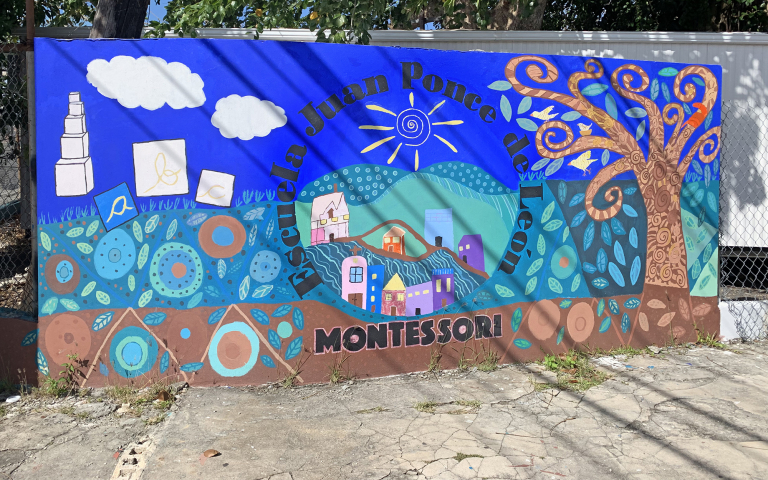 Escuela Juan Ponce de León in Guaynabo was the first Montessori school in Puerto Rico. It was started by Ana Maria Garcia Blanco before she became the executive director of the Montessori public school system. Photo by Malia Schimminger


The primary campus of the Juan Ponce de Léon Montessori school in Guaynabo, a city just west of San Juan, consists of a few one- and two-story buildings and a covered basketball court. A fence separates the complex from a five-lane road, and a security guard sits at the gate.
Inside the classrooms, pre-kindergarteners learn to clean dishes and tie their shoes. Middle schoolers gather on the floor to watch a history video from a lone laptop, and on the playground, a student group prepares for the afternoon’s jump-rope competition. 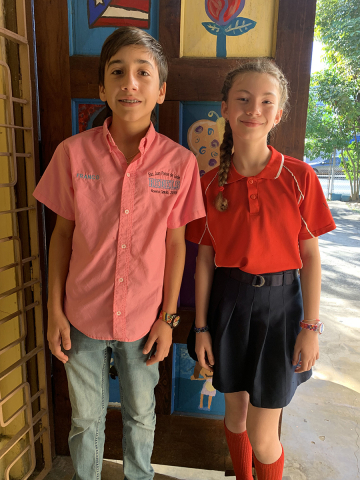 There is no evidence that a hurricane passed through just a year and a half ago because this part of the school was undamaged. However, the nearby high school building suffered irreparable damage to two classrooms, formerly occupied by the pre-kindergarteners.

Ana Maria Garcia Blanco, executive director of the Montessori public school system in Puerto Rico, visited 45 of the 49 schools she oversees in the two weeks following the hurricane. The Montessori schools in Mayagüez and San Juan were among the first to reopen.

Blanco identified her first challenge as reopening the schools to return to normality. If children had a safe place to go, their parents could do what they needed to do, she said.

Her second challenge was a waiting game, for she could not reopen the schools until the Department of Education approved.

“It was a very slow process. There was very little participation of communities and school people in the decision-making of that process,” Blanco said. “We were ready before the state was ready.”

But even when schools began reopening a month after Hurricane Maria, Keleher found herself asking, “Was it the right decision to go back into a building and not wait for someone to come and fix it?”

Schools reopened in waves, but there was not a clear plan as to who would clean and repair them, how to ensure teachers and students would return, and what to do about schools that were still serving as shelters.  The Escuela Juan Ponce de Léon, although a public school, faced fewer problems than other public schools post-hurricane.

Blanco attributes the school’s readiness to reopen to the community of parents and neighbors who were following the Montessori values of “collective work and participative governance.”

Blanco’s final goal was to have her students become part of the reconstruction efforts. The Montessori schools partnered with Para la Naturaleza, the island’s nature reserve organization, to plant trees and grow food. The program, along with the Montessori schools’ Casa Familiars, or Family Houses, allowed students and families to feel rooted in the recovery while receiving psychological help and peer counseling.

In contrast, the rest of the public school system was still struggling to provide psychological services to students and their families. “Not every school had a counselor, social workers were maxed out -- one social worker per 500 kids -- no nurses, no psychologists …” Keleher said.

The need for school psychologists was evident in the months after the hurricane. In July 2018, Dr. Carlos Sellas, a faculty member at Ponce Health Sciences University, reported seeing pseudoseizures, auditory and visual hallucinations and fears of the dark in school children. 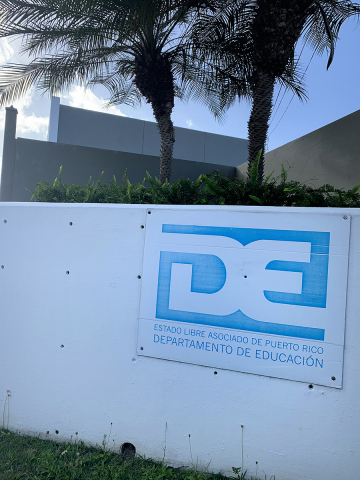 In March 2018, Keleher announced the contracting of psychologists in every school, with the goal of having one social worker per 250 students.

Among Keleher’s post-hurricane reforms was also the transition to online school enrollment.

According to Keleher, a “human-independent” enrollment system is necessary because there were teachers and principals who were “lying” to children.

Thirty-eight percent of students in Puerto Rico need special education, and Keleher said in-person enrollment became problematic because there were “bad actors in buildings” – including teachers and principals – who were refusing to grant enrollment to students with disabilities.

Franco Marraro is a ninth-grade student at Ponce de Léon. While giving a tour of an elementary math class, he pointed out a red-headed student sitting on the floor with an aide.

He mentioned that the student has Down syndrome, but she “has nothing different from me.”

When the young girl looked up, she and Marraro shared a smile and a wave, demonstrating that they were, in fact, more alike than different.

Keleher was satisfied with the online enrollment process. She said the 2018-2019 school year showed an 80 percent student retention rate because bias was taken out of the equation. In an interview with Education Week regarding her resignation, Keleher described herself as a “change agent,” saying that Puerto Rico now needs “someone to hold the course.”

In contrast, Blanco expressed frustration with the new enrollment process. “We are very concerned there are communities that don’t have access to internet, but it’s a very complicated technology,” she said. “You have to look at the reality from where people are – not from where we are.”

Adamaris Zambrana is the director of the Escuela Juan Ponce de León, a Montessori school in San Juan. Because space is so limited in her school, prospective parents must attend an open house, at which they can pick up one of only 200 applications for the school, which teaches pre-kindergarten through high school.

“I am so sad because I don’t have the space,” Zambrana said. Almost all of the Montessori schools have waiting lists.

Blanco attributes the popularity of the Montessori system to its communal goals, including the “socioeconomic transformation of their communities and investing in the next generation to fight poverty and addiction.”

The socioeconomic goals of Blanco and Zambrana were first reflected in Congress in January 2019.

In the U.S. House of Representatives, Residential Commissioner of Puerto Rico Jenniffer González-Colon introduced legislation that would lift restrictions on the Child Tax Credit for Puerto Rican families.

According to the Internal Revenue Service, the Child Tax Credit, as it exists now, is a tax reduction of up to $1,000 “per qualifying child.” On the mainland, this applies to families with any number of children. In Puerto Rico, only families with three or more children – 12 percent of the island’s families -- are currently eligible for the reduction.

In her proposal, González-Colon described the extension as “a tool to help families offset the expenses of raising a child and raise themselves out of poverty.” Although Puerto Ricans do not pay federal income taxes, they pay federal payroll taxes, through which they could claim the credit.

U.S. Rep. Brian Fitzpatrick, R-Levittown, who has visited Puerto Rico twice since the hurricane, is co-sponsoring González-Colon’s proposed extension. He is motivated to aid Puerto Rico by the Latin American community in his congressional district, which includes all of Bucks County and part of Montgomery County.

According to the Center for Puerto Rican Studies at Hunter College in New York, enrollment at Florida schools post-Maria increased an average of 5.26 percent as of December 2017, at which time 86 percent of Puerto Rican schools were reopened.

“Second of all,” Fitzpatrick said, “as far as the poverty rate goes, why should kids in Mississippi be treated any different than kids in Puerto Rico?”

“Puerto Rico is an island in a hurricane alley 2,000 miles off the coast of Florida,” Fitzpatrick said. “The residents there are citizens. Commonwealth status doesn’t help them.”

The argument for the extension of the Child Tax Credit may be easier if Puerto Rico is on a track toward statehood, said Fitzpatrick. However, he does not discount the power of the tax credit on its own.

“I believe this is about kids,” he said. “We need to care about all kids, no matter where they are. There are some families that choose to stay on the island. We shouldn’t punish them.”

I’ve served in a communications role for Penn State Football for over a year, and I will be working in Football Development with USA Football this summer.