Penn State senior Paul Perrault does not fit the stereotype of the introverted, stoic engineering student. When Perrault is not working toward his degree in mechanical engineering, he spends much of his time finding ways to shock and amuse people, from close friends to complete strangers alike.


“I'm…a person that likes to make people laugh and feel uncomfortable regardless of how foolish I look,” Perrault said.


While he has been successful in finding various ways to accomplish his goal of entertaining the people around him, perhaps Perrault’s most well-known comedic persona is Jeffrey Wild, as illustrated by the YouTube video’s almost 3,000 views.

“Well, obviously I had most of the inspiration from Steve Irwin,” said Perrault of the college-themed “wildlife” expert Jeffrey Wild. “I also think sorority girls are one of the most interesting species, so on their special day during the great migration I decided to go out and learn more while documenting my work,” Perrault said, speaking as Wild.

In the future, Perrault said Jeffrey Wild and his camera crew are considering venturing into the library and the gyms on campus to document activity there, too.
Recently, Perrault and his friends have bewildered other students with their “crosswalk curling” routine, in which they filmed themselves pretending people walking downtown were the curling stones by using brooms to sweep their paths clear. 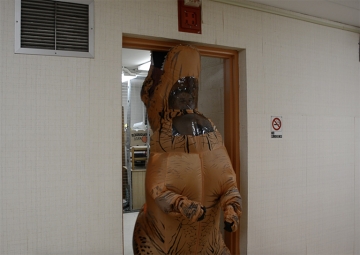 Perrault models the T-Rex suit he and his friends wore to the Ohio State game this football season.

How will they surprise us next? With only one semester left before Perrault and his friends graduate, time is limited—but ideas, certainly, are not.

Sara interned in development and communications at nonprofit organization Philadelphia FIGHT this summer. After graduation, she hopes to work for another nonprofit, or continue on to law school.

The Power of Yoga