Jiggy Yoon dances her way through the trees

You may have seen her performing on the field at Beaver Stadium during football games or tearing apart the dance floor during THON, but who is Jiggy Yoon when she is not performing with RAM Squad in front of hundreds of people? 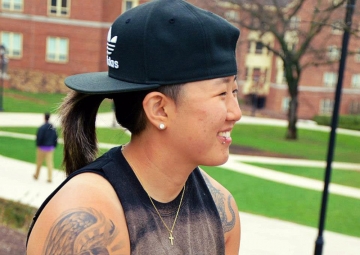 Jiggy Yoon, 22, is a Penn State senior whose story is still being written, but her journey through life has been one of heartbreak and struggle. Through it all, Yoon has maintained an upbeat and optimistic attitude. Yoon is known throughout the Penn State community as a member of Raw Aesthetic Movements (RAM) Squad, a hip-hop dance team that she has performed with for the last four years. Although she always seems to have a smile on her face on stage, there have been times in Yoon’s life when she has faced adversity and major challenges.

The New York City apartment that Yoon grew up in was set on fire and she lost virtually everything and her mother recently passed away from cancer. She’s struggled with finding her true identity but she says one class at Penn State has helped her find the right path.

Yoon signed up for BiSci003 thinking that it was an easy biological science course with no exams and limited assignments. What she didn’t know was that the Environmental Science course she signed up for would end up being life-changing.

BiSci003, which is taught by Christopher Uhl, is a class that is not similar to any other class at Penn State. It is considered a journey to find your ecological footprint. By doing that, Yoon believes she found her purpose, too. 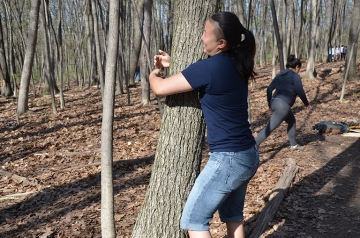 Hugging trees, hippies, finding a real connection with Earth. Those are the words Yoon uses to describe what she feels BiSci truly is. Yoon was so inspired by what she learned as a student, she wanted to become a teaching assistant for the following semester. However, she was not originally chosen by Uhl to become a TA. When she received a phone call over spring break informing her that Uhl had ultimately decided to give her the position, she says she was happy that she would have a group of students to guide on their own journeys.

As a TA, Yoon spent her entire junior year teaching students about her story of tough times and listened to students as they told her theirs. Sometimes the class would go on nature walks, and other times they would meet in classrooms. Her students wrote weekly journals talking about their feelings, hopes, dreams, and struggles. Yoon provided positive feedback to let them know that there is a light at the end of the tunnel, although she didn't always see one herself before taking BiSci003.

Jiggy Yoon knew that she wanted to continue her dance career while attending Penn State. After her friend suggested that she join RAM Squad, she discovered that she not only loved performing during football games at Beaver Stadium and on stage at THON, but she also grew to love and value the friends that she made on her dance team.

Yoon's academic advisor suggested she should take BiSci003 as an easy course to fulfill her science requirements, Yoon never knew how much the course would change her life and college experience.


Yoon and two of her students explain what BiSci003 means to them and what they have learned through the course.

Melissa is an experienced broadcast journalist specializing in digital, social and traditional media platforms, as well as radio and television production. Melissa will be a May 2014 graduate of The Pennsylvania State University, Melissa received a degree in Broadcast Journalism, with a minor in Sociology. Melissa would ultimately pursue a stimulating position in the sports or entertainment field.

Informal Balance: Creating New Apparel for the Love of Art