Job market tight for college graduates, even in booming China

SHANGHAI -- Xin Sun, 24, is taking the route his parents always wanted for him.

Attending Nanjing University, he graduated with a degree in management information systems. On paper, he was on the fast track to success.

But the last item from his checklist wasn’t completed.

Fast-forward to March 2013. Xin is jobless and, he said, starting to become hopeless.

Xin said he dedicated four years of his life to studying for a job market that doesn’t really exist in China – at least not yet.

College students across the globe are facing a saturated job market with a surplus of graduates and not enough jobs to satisfy the growth.

And China, which has often been seen as a powerhouse for employment, is no exception. The problem in China, though, is especially acute for college graduates – which seems to defy conventional wisdom that more education means better job prospects -- or jobs that utilize their college degree.

“I think students feel like they’re working toward this dream – much like the American dream – of going to school, getting a good job and making a good life,” Xin said. “We’ve seen agriculture and factories in our country, which we still need, but there has to be more industry to account for these students graduating. There has to be more jobs that use our degree.” 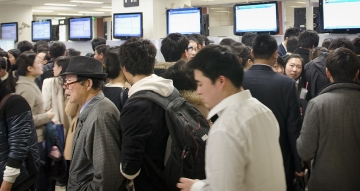 China is regarded as an economy with an enormous manufacturing sector fed by an endless supply of cheap labor. But those jobs have little attraction for the country’s growing number of college graduates like Xin.

Chinese governmental leaders have set a goal of 195 million college graduates by the end of 2020.

From 1998 to 2011, the enrollment rate in college has gone from 8 percent of people enrolling in universities to 27 percent, causing a large development in education and an increase in students very quickly, according to Ding Yan, professor at Fudan University in Shanghai.

“Fifteen years ago, only four or five of every 100 people would be a university student,” Ding said. “Now it’s 30 and increasing.”

The question facing China is whether there will be enough jobs for this new generation of college graduates.

Ding sees China rivaling the United States in college enrollment in the future.

But, for now, Ding believes the growth is too quick, and China is going to continue to run into major issues with absorbing the spike in students.

Jobs in farming and factories are plentiful – and, for now, there are enough people to fill them. Migrant workers who perform these menial labor jobs, Ding said, are still present within China’s workforce.

“There are not as many options in rural areas to receive a college education, so China still has enough workers to remain in this manufacturing, low-skilled industry,” Ding said. “But it might not stay like that for long.”

The increased premium on a college education for Chinese young people could chip away at the number of people willing to take factory or farming jobs, Ding added. Instead, there will be a growing number of graduates competing for relatively few jobs, mostly in technology and business.

Xiong Qingnian, a Fudan professor and director of the Research Institute for Higher Education, said universities could help ease the demand by college graduates in certain sectors by diversifying their programs.

“Intertwined into the more common majors like business and economics, there should be more vocational and technical skills being taught at the university level,” Xiong added.

Xiong said the government needs to enact policies that will take the strain off of college graduates from only finding one type of niche job.

Fudan University’s Ding said Chinese students need to be realistic because not everyone can secure technology-based jobs.

For instance, just 10 percent of college graduates who studied engineering are actually getting a job in engineering.

“Assembly and production lines are still extremely important,” Ding said. “We rely on such low-skilled industry. And without it, if students continue to choose unemployment until a higher paying job comes, China has no future. This is why the Chinese government needs to promote all industries.” 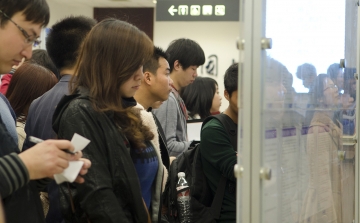 Some graduates are taking matters into their own hands – creating opportunities for themselves in non-traditional ways.

Fudan University professor Ding said he heard a story of a student who graduated from Peking University, one of China’s elite universities, who opened up a meat-selling business.

Yet, it’s something that should happen more often because it offers a greater variety of opportunities for students who are looking at unemployment, Ding said. It's an unorthodox way of job creation.

Meanwhile, college students who have followed a path that promised a better life are struggling.

Hu Zhen Hao, on the cusp of earning his accounting degree, is one of them.

Having initially started at a technical school, Hu joined the education movement, getting accepted to Shanghai University of Finance and Economics.

Every week since January, he has attended various job expos in search of something that can take him out of the unemployed college grad statistic.

And every week, he’s heard nothing back.

So, he said, as much as he doesn’t want a low-wage job, he thinks he might be forced into one.