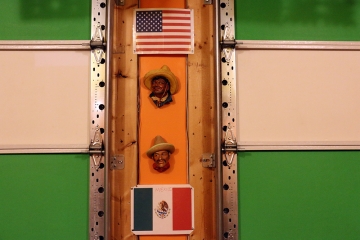 Eunice Hockenberry moved from Mexico to the U.S. fifteen years ago. She quickly realized that in order for her kids and grandkids to preserve their identity they needed to be exposed to Mexican cultural traditions and to be able to speak in their mother tongue. At home she taught her children about their Mexican traditions and culture and spoke to them in Spanish.

Now she is trying to do the same thing with her grandchildren, who were born in the U.S. and live with her.  She wants to make sure they do not forget their roots and will grow up to be bilingual.

Helping her children and grandkids keep their native tongue has not been easy. The children speak English at school. The only time they are exposed to Spanish is at home, where there may not be time to translate back and forth from English to Spanish. Hockenberry says that most of the time she speaks Spanglish to her grandchildren so they can understand faster and she can get a quick response. She is not happy about doing this because she doesn't think the children are speaking Spanish enough to stay fluent.

One of the children learning Spanish at home is 12-year-old Marilyn Heyer-Beltran, Hockenberry's granddaughter.  Marilyn agrees with her nana about the importance of not forgetting where the family comes from.

Marilyn considers herself Mexican because she was born there and migrated to the U.S. when she was one year old. She says that what she enjoys the most about her Mexican culture are the parties, the decorations, the food and the piñatas. Although her nana tries to teach her about Mexico.

Marilyn is a typical teenager, too. So the cultural lesson from her nana is mixed in with the U.S. culture she experiences at school and play, and sees on TV. Marilyn says she only knows a little bit more about Mexico than any other U.S. citizen, but she values the cultural experience.

The Importance of the Native Tongue

Eunice Hockenberry says it is a challenge to keep using her native language every day with her family.

My art practice focuses on social issues related to Hispanic immigration, discrimination and lack of identity of the Hispanic community in the U.S. These issues became very important in my art work and personal life when I emigrated to the U.S., when I felt out of place, an outsider.