Music always has, and continues to be, the lifeblood for Arthur Goldstein.

Whether travelling around California with a rock band fresh out of school, on the Pittsburgh jazz circuit, or picking up any given gig in State College as he has done for the past two decades, Goldstein remains as in love with music as ever before. Even in his late sixties, and after battling health-related issues, Arthur continues to dedicate his life to the enjoyment of music.

Whether playing in front of an audience of thousands, or in an intimate restaurant after midnight, Goldstein determines the success of his music by the faces of the audience members, and of course, from the sound of their clapping. 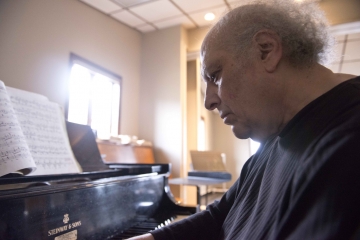 Despite growing up in a musical family many decades ago, Goldstein didn’t always have his sights set on music as a career. After completing college in composing, Goldstein pursued a secondary degree in literature. He remains an avid reader today, but made the choice years ago to make it an alternative to playing piano.

Learning classical piano from his mother at a young age, and studying throughout primary school, Goldstein maintained and honed his skills at every stage of his life. It was after graduation and completing his masters degree that Goldstein decided to hit the road. He hasn’t looked back.

Whether it is a simple piano recital with one of his students or a Friday night jazz gig at a bustling Zola’s Bistro, Goldstein remains fueled by his love of music and the emotional response it has on his audience.

In addition to performing with a handful of jazz groups in the Central Pennsylanvia area, Goldstein also teaches private lessons with students of all ages. One of his students, Bunny Moon, is a retired 86-year-old woman who has been working with Goldstein for nearly 20 years in an effort to rekindle her love for piano music.