An evening at Ken’s Best Wurst 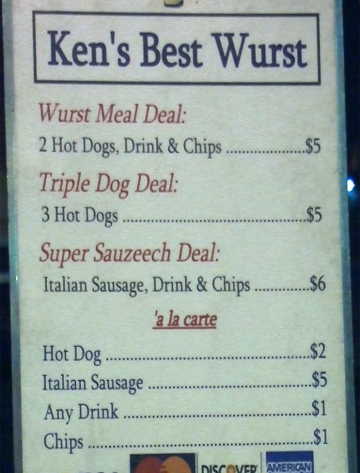 Located in the parking lot behind the Lion’s Den and surrounded by many other local bars, one little hot dog cart stands with a red umbrella with the sign Ken’s Best Wurst hanging from it.

Baumgarten is the owner of the hot dog stand. Baumgarten was born in Brooklyn, and raised in Queens. He moved a lot through out his lifetime and found himself in State College two and a half years ago for the love of his granddaughter.

“My daughter did a terrible thing to us,” says Baumgarten. “She decided to have a cute grand baby.”

Baumgarten  was living in Maine, working as a pastor, when his grandaughter was born. distance from Maine to State College was almost 10 hours and it was taking a toll on Baumgarten and his wife. So they decided to move to  be closer to their granddaughter.

“We were at good place to consider a move so we decided it would be great,” says Baumgarten.

Baumgarten decided he wanted to start a business. He wanted to do something that was recession proof and that would still give him his days to himself to do what he wanted.

After tons and tons of paper work, approval from the State College Borough and two months of scouting  for the best place in town to start the business. Baumgarten opened up in May 2011 with two weeks left in the semester.

Also on the menu: drunk shoes

Every Tuesday, Friday and Saturday from 10 p.m. to 3 a.m. Baumgarten is outside making hot dogs for the drunk Penn State crowd. Along with hot dogs, Baumgarten offers chips, non-alcoholic drinks such as soda, Gatorade and water.  he has Italian sausages for people with big appetites and “drunk shoes,” too.

His idea of drunk shoes came to light after nights and nights of watching young women wearing heals and taking them off and walking with their bare feet.

“The ground out there is just nasty,” says Baumgarten. "So the thought about walking bare feet was disgusting me."

Along with his drunk shoes, baumgarten has many specials. He says his most popular is the triple dog deal which is three hot dogs for five dollars.

Good vocabulary gets a discount

He also started something new called the word of the day. It’s a dollar a day discount where he tweets a word out on Twitter and if a customer uses it correctly in a sentence they get a dollar off their meal.

With the Nathan's opening across the street Baumgarten says he isn't worried about the competion and belives that they wont affect each others business.

Baumgarten doesn't regret opening his business here in state college. He has postive relationships with his costumers and the community.

"Doing this job is like dinner and a show every night," Baumgarten says.

My name is Belinda Charles. I am currently pursuing my bachelor’s degree in Broadcast Journalism and minoring in Sociology. I am ready to gain experience and develop the many skill sets that are needed to work at a professional level. I am looking to work in television production, and to eventually become a station manager.