Alex Melso has always had a passion for sound. As a young kid he played the trumpet and also sang in a choir. Coming to college Alex still wanted to be involved with music and got sucked into mixing his own songs when a friend of his started to mix and introduced him to it.

He dubs his work as a labor of love with the amount of time and work that goes into mixing the perfect song. The current mix he’s working on has been a culmination of work over the last few months.

“When you sing a song you’re singing other peoples words, but with this you get to take a song and make it your own. That self-expression is important to me, ” Melso said.

A big part of that is music connects to every person in a different way that still images cannot. Music brings out emotions in people and helps them to better understand themselves and their emotions within.

“Sound is better than sight, we listen to songs without seeing anything, but we can’t look at Silent film anymore with the same result in this day and age,” Melso said.

Right now Melso is struggling to find his signature in his songs. One of his biggest musical inspirations is Lido – a DJ whose signature is described as a “watery sound,” three significant chords that are throughout all of his mixes. Its something that helps Melso recognize his music even when Lido is using a different alias.

A signature would simply be something to make his songs stand out. Instead of focusing on the best chords to use, he is thinking about going with a ‘lack of music’ as his signature. Where most of the DJs build up to a ‘drop’ and then let the music hit the listener, Melso is trying to see how hitting the listener with no music goes.

“I decided to make drops more prevalent in my music, from the buildup to sudden pauses to give it more flavor,” Melso said.

Being a film major, Melso is looking forward to being able to add valuable sound to not only his projects, but possibly as a career too. At his young age his career path may change, but right now the idea of being a folly man -- the people that enhance the special effect sounds -- is extremely intriguing to him. 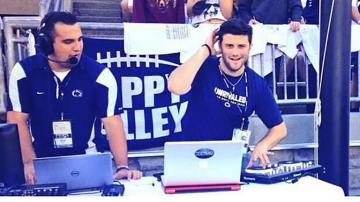 Alex Melso getting the crowd pumped up at Beaver Stadium before the game. Photo by Julia Theaman

Fortunately, Penn State provides a multitude of opportunities not only in the professional sport setting but also by having numerous and lively downtown locations. There is an abundance of opportunities to grow for Melso in the future, but right now he is just going to keep taking it one step at a time.

“I want to keep this innocence of making fun music, but as I go down the road I’m going to be really excited to see what comes out of this computer,” Melso said.

Video: Looking Ahead to the Future

Although Melso hopes to still be a DJ in the future, he says he's looking to apply his music skills to movies soundtracks.

Hoping to make my career after graduation in sports production. My goal is to produce feature films on athletes to allow fans to connect and learn more about their favorite players.

Singing Together Through Alzheimer’s