Let me get this ‘write’

Guerry has been involved with theater since grade school and has continued practicing his passion into college. When Guerry isn't acting he's running around campus, grabbing interviews and then heading downtown to 123 South Burrows to type up his story at the Collegian.

Ideally, Guerry says he hopes to work as an entertainment reporter one day. With such a passion for the arts, Guerry has also found a love for impressions. His go-to impression is Hank Hill from King of the Hill.

Guerry originally attended Penn State Altoona his first two years of college. While there, he wrote for the campus newspaper, the Altoona Collegiate Review.

By sophomore year, Guerry was co-editor-in-chief. Now, having transferred to Penn State's main campus, Guerry he's a bit overwhelmed with the transition.

Although he was the "top dog" at the Altoona Collegiate Review, Guerry now works as a candidate at The Daily Collegian. As a candidate for the Collegian, you are required to complete four articles and pass out newspapers around campus for several hours. This semester, Guerry has had 11 articles published. After this semester, Guerry hopes to write more frequently for the Collegian, preferably for the campus section.

“I went from being a semi-sized fish in a small pond to being a small fish in a big pond.” Guerry said. 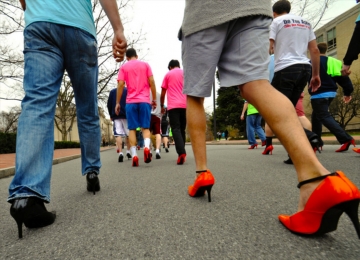 The event, walk a mile in her shoes', was sponsored by by the Alpha Kappa Lambda, Phi Chi Theta, Phi Gamma Nu and Sisters on the Runway. The event consisted of male students literally walking a mile in heels to raise awareness of rape, sexual assault and gender violence.This past semester, Guerry's articles have made the front page countless times. One of Guerry's articles titled "Penn State students come together to 'walk in a mile her shoes'" was picked up by USA Today's college newspaper.

The Walk a Mile in Her shoes event started outside the Alpha Kappa Lambda house on October 18, 2015. File photo/The Daily Collegian

Guerry said he enjoys covering events and hopes to continue reporting. He said that while he enjoyed working as an editor at the Altoona Collegiate Review, he prefers reporting because he'd rather worry about his work and not others.

Matt Guerry has always had a passion for theater. Now in his third year of college at Penn State University, Guerry is majoring in Print Journalism and writes for The Daily Collegian but still makes time for his first love, acting.

In addition to acting, Guerry also enjoys doing impressions of iconic characters. Guerry humbly admits that he been cast in a lead role in every play since high school.

Born in Plymouth Meeting, Pennsylvania, Ciara is a passionate, aspiring journalist at Penn State University. Ciara has worked as a copy desk editor and reporter for the Daily Collegian. She hopes to work for a major news publication as a producer in the near future.

A Passion for Music