When an audience comes to see a play or a musical, all they see are lights, camera, action! Behind all of the glitz and glam exists more hardy and gritty levels of theater.

No Refund Theatre is no exception.

The Pennsylvania State University has a designated club for students who love to bring the drama to life. No Refund Theatre, or NRT, is a student-run organization that puts on around ten shows a year for the general public. All admission is free. The club does receive a budget for each production from the University Park Allocation Committee (UPAC). The money comes from the activity fee that students pay for as part of their tuition.

Brian Guttierrez is a junior at Penn State who is majoring in nuclear engineering. He has been involved with NRT since his freshman year and now is the vice president for the organization. He recently just directed his second show for NRT called Prelude To A Kiss. In order to become a director he had to assistant direct one show and be a technician for another show. Then he was allowed to propose an idea for a show. From there, a panel of officers decide whether a student is ready to direct or not.

There’s a lot to love when being the director Guttierrez said. Personally, he enjoys making people laugh. He said that he normally has a commanding presence in the room and that it’s refreshing when people listen. He joked about it being nice when he tells people what to do and they actually go do it. When directing, Guttierrez likes seeing how a project progresses from “words on a page,” with people who have never met before, into a cohesive story with the ability to emotionally affect people.

His passion for theater started in high school. Guttierrez said that he was in a dark place then and that he wanted to find himself. He said he wanted a place where he had lines to say with an ultimate goal at the end. The theater was that place for him. He said that the fact that people are watching gives meaning to the moments created on stage.

Ultimately he wanted to be a part of the magic that creates these perfect moments.

Guttierrez said it was not easy to be a Penn State freshman. He didn’t connect with a lot of people right away so he turned to the annual involvement fair. After finding a flyer for No Refund Theatre under his bed, he quickly gave the president a call and found his niche.

Synopsis: Prelude To A Kiss

Prelude to A Kiss follows the story between two polar-opposite people who end up falling in love despite their different outlooks on life. Rita is more of a pessimist while Peter looks on the bright side of things. Soon after the two fall for each other, they end up exchanging wedding vows. After the ceremony is over, a strange old man at the reception asks to kiss the bride and she agrees. Rita’s and the old man’s souls end up switching bodies during the kiss. Neither Peter nor the wedding guests understand what has happened. Peter ends up leaving with Rita but doesn’t realize that it isn’t really her. Craig Lucas wrote the play in 1988. It opened off-Broadway at Circle Repertory Company in March of 1990 and starred famous actors such as Alex Baldwin and Mary-Louise Parker. 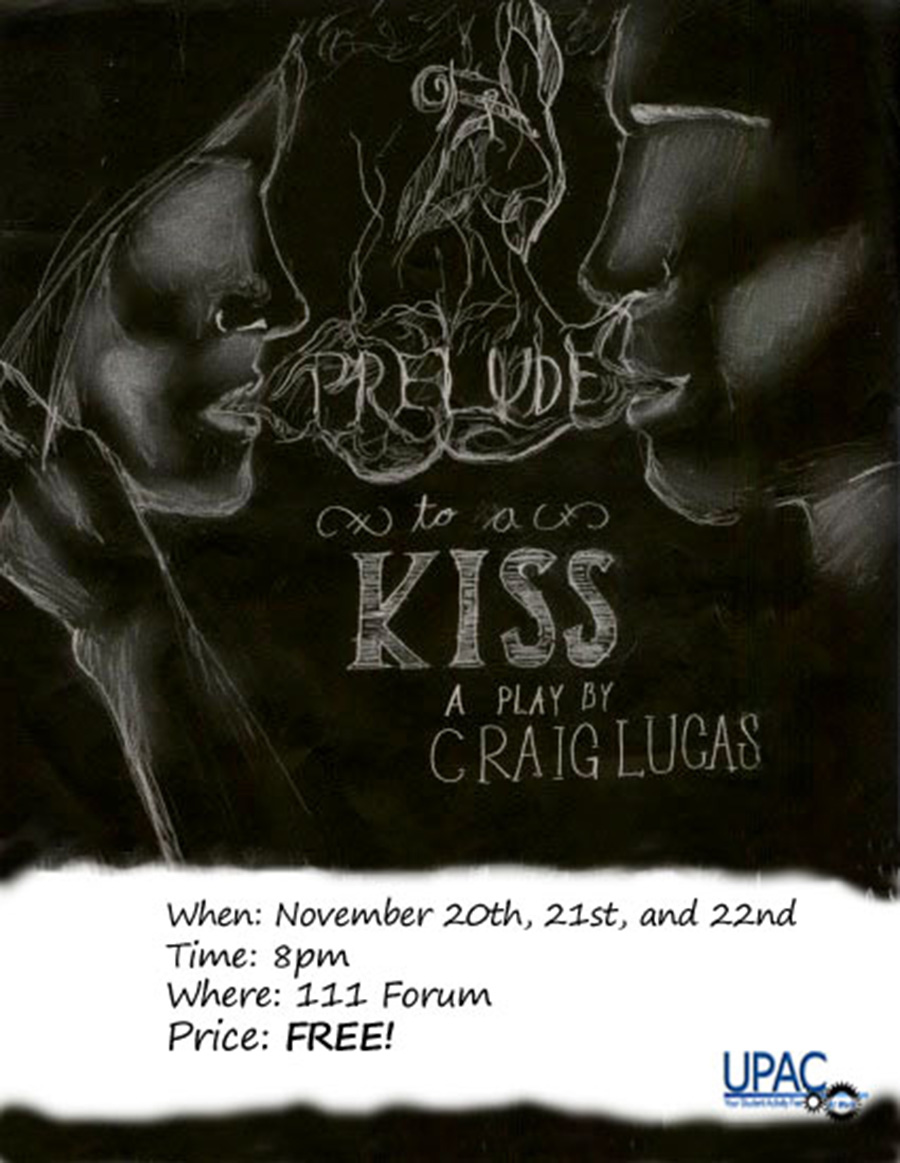 Cast (by order of appearance)

Words From The Cast

“Andrew Leite is excited to have such an interesting role in his first show with No Refunds Theater. As a freshman at Penn State, Andrew is studying English and Advertising, but has always had a love for working in theater. Throughout high school he acted and directed and is thrilled that he has already gotten the chance to do so in college. Andrew would like to thank his supportive family and friends, the entire Prelude cast and crew for being such awesome people, and Brian, Amanda, and Connor for their amazing direction. He hopes you all enjoy the show, stay alert of old strangers at weddings, and floss!”

“Stephen is a Junior studying biobehavioral health, which means he has no business acting but he does it anyway. For like, friends and stuff. This is his first time in a leading role and he is honored for the opportunity. He would like to thank Brian for the chance to be a ladies man and his wonderful ADs, Connor and Amanda for being the best joke tellers in email history.”

A Note From Amanda Ress (AD)
“So, NRT is my favorite thing. I am so happy that I found a home in this club. This particular experience has been so lovely.  A big thank you to the cast and techies for their positive attitudes and hard work throughout the whole process. They are an extremely talented and sexy group of people. A big thank you to Connor McElwee for being such a gem of a fellow Ass Director. And, of course a HUGE thank you to B-Gutz for giving me the opportunity to assistant direct such a cool show.  I have learned a lot of valuable lessons from this experience, and it's been such a great time. For those of you reading, enjoy the show!!!”

No Refund Theatre stages a unique annual event called Vaganza, in which participants write and stage a theatrical production in 24 hour.

The rules are simple: teams are divided at random from a hat. A theme is chosen. Each team chooses a prompt or proposes its own idea. The teams are only allowed to use NRT’s collection of props.

Finally, at 8 pm on Saturday night the teams present a ten-minute performance based on the prompt they chose.

I am currently a Senior at The Pennsylvania State University with a major in Broadcast Journalism and a minor in both Sociology, and Business & The Liberal Arts. Being a part of the entertainment industry is something that I hope to achieve whether it involves being on-air, behind-the-scenes, production, etc. I am an enthusiastic person that loves to live life to the fullest and I take as many opportunities as I am given. Living a life of no regrets will propel me forward and help me achieve my goals. My hard work, determination, and relentless effort to achieve greatness is something that I value in myself. When I set my mind on something that I love, I follow through with every step, never back down from a challenge, and stay positive along the way.

A voice fit for the radio