Kiersten Gelfand was always a small-town girl with big dreams to make the world a happier and healthier place through fitness.

Gelfand is from Alpena, Mich. a little town on Lake Huron. She received two degrees at Central Michigan University, her undergraduate in Psychology and Master’s in Exercise Science.

She said began her company, Fitness Inspired, after a friend encouraged her to make her dreams a reality. She began Fitness Inspired in Michigan but brought her company to State College after her husband received a job with Penn State Women’s Basketball as the Director of Operations.

Gelfand said it was challenging to leave her Fitness Inspired community behind in Michigan, but she still stays in touch and said she loves the new community she has grown in State College. Since being in State College she has acquired two locations to support her indoor and outdoor workouts. 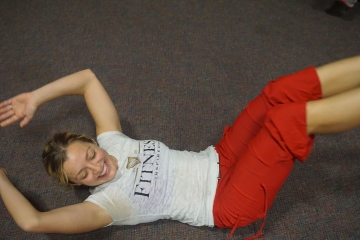 She also had a daughter, Addison, who was delivered by a Caesarian section. Most women take four weeks or longer to fully recover from such a procedure, but Gelfand was back to work within two weeks.

A year and a half ago, Gelfand was diagnosed with thyroid cancer. Her treatment included several surgeries, and radioactive iodine therapy.

She had to go into isolation because of the radiation. While in isolation, Gelfand tried to make the best of her circumstance and continued to run stairs to keep her body strong. She said she needed to keep her mental strength strong to push through when her body was angry after everything it had been through.

Gelfand describes Fitness Inspired as an amazing community of people. She said everyone is supportive of each other's health and fitness goals and this helps them to work together to follow the Fitness Inspired plan and make positive changes.

Fitness Inspired currently specializes in boot camps, group fitness, and private training. It is a combination of individualized training with a support system of people to keep the energy fun, and encouragement high, Gelfand said.

She said that all new clients with all levels of fitness usually see improvement after only one month of committing to Fitness Inspired.


Ellie Siegert, Kiersten Gelfand’s sister, says that Gelfand has loved fitness for as long as she can remember.

Siegert says Gelfand worked out every single day leading up to her pregnancy. She says a work out video called “turbo kick” is how Gelfand got into fitness. Gelfand had Siegert doing turbo kick when she was six years old. Siegert said Gelfand made fitness so much fun growing up. Siergent realizes how important fitness is to have in your life because of the influence of her sister.

Taylor Lennox is a senior from Philadelphia, PA majoring in broadcast journalism and minoring in entrepreneurship and innovation. She also is in the John Curly Center for Sports Journalism. She serves as a News Director, as well as being a member of news and sports broadcast within ComRadio. Taylor interned with Penn State Athletics in Spring 2015.  She is interested in pursuing a career as a TV producer, talk-show host, or a play-by-play announcer. You can reach her via email at .(JavaScript must be enabled to view this email address).