More Than Just An Athlete


You can find more than just dollar games, pizza, hot dogs and sodas on a Thursday night at the local bowling alley in State College. Check out the last couple lanes and you’ll be amazed at who is over there throwing strike after strike. Thirty-eight-year-old Special Olympic athlete Matthew Prosek and his bowling team, made up of other Special Olympic athletes, are always available to give you a few pointers on your game.

One of four children to mother Cathy, Prosek was a normal birth alongside twin Nathan. At just four months of age, Prosek contracted meningitis, which occurs when bacteria enters the bloodstream and migrates to the brain and spinal cord. Doctors were able to save his life, but he was left brain damaged and with a seizure disorder.

However, this would not slow Prosek down. He has been involved with Special Olympics since 1983 as both an athlete and a volunteer for the organization. Competing in many events across the country, Prosek is what they call a veteran. Tennis, bowling, golf and track and field are just a few of the many sports that Prosek has taken part in over the years.

Prosek says his favorite sport is tennis, because it’s a nice individual sport. “A lot of people in my group sports don’t enjoy losing. I’m not big on sore losers,” said Prosek.

On top of being a great competitor, Prosek prides himself in being a perfectionist. In fact, he has written a book titled My Life as a Perfectionist. In this book Prosek tells what it’s like in his attempts to be the perfect individual. 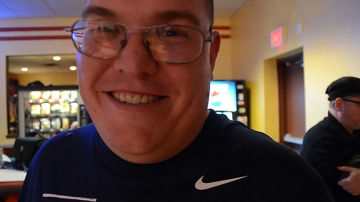 Mom Cathy has seen her son and his fellow athletes flourish because of what the Special Olympics has to offer. Not only does the organization provide them with athletics and a sense of confidence, but also a friend group and a caring community that stays bonded together through the relationships that have been built up over the years.

“If you would have told me that he’d be where he’s at today, I would have never believed that. He has a good support system and people care a lot about him,” said his Mom.

Prosek continues to be heavily involved in the Special Olympics community in Centre County and is a leader for those who are new to the organization.

If you’re ever looking for a good doubles partner or think you can hang with the crew in lane 1, Prosek is the guy to know.

Before the use of that nine-digit number seen located on the front of your PSU id+ card, student and employees of Penn State were identified by another number, their social security number. Penn State was on a mission to help protect the identity of its students and employees, and thus created this new identification system where as soon as one enrolls in the university they are given a unique nine-digit number. Prosek, who was formerly an employee of the university, was integral in helping come up with this new system that ultimately helps protect individuals privacy.

I am a senior at the Penn State University majoring in Broadcast Journalism and minoring in Business. In the future I hope to be a producer for a major news organization.

A Game of Skill, Endurance, and Camaraderie.