STATE COLLEGE, PA-  Many people spend their lives searching for something that there passionate about. Some people start their hustle at an early age and it takes others longer to find something they love.

In Dondre Shivers, case his job is more than a hobby, it’s a passion that he enjoys and uses to make others happy. 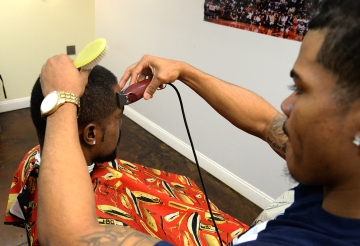 A side close up of Shivers shaping a clients headline at Nothing But Hair salon in downtown State College, PA (Photo by Juanita Henry)

Shivers grew up in New Jersey and never aspired to go to college. But with his mom’s encouragement, he decided to attend Penn State University hoping for a new beginning at something greater in life.

The decision to attend college brought Shivers many opportunities for his hobby and also his long-term goals. He is currently majoring in sociology and wants to learn how to better understand people.

His first attempt cutting an actual person's hair (it happened to be his cousin's head) turned out to be a disaster because his skills were still amateur.  Slowly but surely he got the hang of the flow of the clippers and they became apart of him.

Currently, Shivers is working at a hair salon named Nothing But Hair. He juggles school and work like every other college student, except he works long hours consistently throughout the week.

A regular day for Shivers starts with going to class and right after class, he’s on his way to the shop. His future plans does not involve his major. He potentially wants to pursue barbering and he will end up using the skills that he learned in sociology to interact with people.

Dondre Shivers said “I want to revolutionize barbering and keep spreading the love and passion through my craft."

Shivers became fascinated with cutting hair that he decided to take matters into his own hands. One of the first items that he ever cut was a teddy bear.

Juanita Henry is an aspiring anchor reporter seeking to work for the news/entertainment industry. She is currently a senior majoring in broadcast journalism at Penn State University. She has had alot of experience in TV production and newspaper editorial. Henry is seeking to gain more experience by interning in news networks.