One Stage Revolution member directs and performs in gender-based dramas

In the student organization One Stage Revolution, the excitement is palpable as the young actors and directors work together to put together a festival in less than a week’s time. This festival will include songs, dance, poetry, standup comedy, and a couple plays all put together by talented students. One of these students is Kyrie Martin (sophomore, architectural engineering) who is taking center stage at this festival, by not only directing two plays for the very first time, but also reciting two very contradictory monologues. 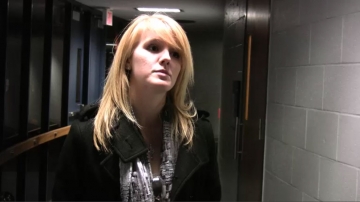 Kyrie Martin has been a fixture of One Stage Revolution since last year, performing as one of the main characters in Neil Labute’s “The Shape of Things”. In just a few short months, it hasn’t taken long for her to become very meshed into the group. The monologues she is performing and the plays she is directing both play into the overall message of the festival: Gender stereotypes and the shackles that bind people to their roles as men and women. Kyrie herself is a bubbly, sweet girl from North Carolina, but she is not afraid to abandon that image in the name of getting into her character.

One of her monologues, called “A Girl’s Prayer” (written by anonymous), comes from the point of view of an idealistic little girl listing all the great things she hopes for from the guy of her dreams. To contrast this, her next monologue (called “College Girl”, also by anonymous) comes from a more jaded voice, one which knows what guys are really after, and plays into that role by behaving as provocatively as she can. Her directorial debuts reveal more into the theme of the festival: “Heart of Hearing” is a short play by Joseph Zeccola which shows a sensitive man trying to explain to an outspoken girl why they are no longer connecting with each other, while the Walter Wykes play “Borrowed Parts” portrays an older woman learning that she can’t use her beauty and status an influence on a younger, more violent partner, eventually becoming used herself. Kyrie took these plays, added some actors of varying ability, and showcased all the work they did before a crowd for the very first time.

The life experience Kyrie has as a young woman not only allowed the monologues to appear truthful onstage, but it also helped her get through to her actors so they could give the best performance possible. No matter what the play is, this experience is probably the best experience a novice director can get.

In preparation for the festival, student-actors of One Stage Revolution fine-tune their performance of two poems. These poems showcase two complete opposite points of view: one a happy, idealistic girl, and the other a vicious, brutal man. The savage male perspective serves to dash all the hopes that the optimistic female perspective builds up in the beginning.

I am a senior Broadcast Journalism major and Theater minor. I have spent the last four years acquiring skills across media, including video, audio, and print. I am most interested in doing art journalism or criminal justice journalism. I am involved as an editor for PSN-TV, in addition to performing other tasks needed, including camera operating, floor manager, and logging and capturing footage.