Video posted May 5, 2016 in News by Adeola Bakre and Nana Kennedy-Kwofie


In the year 1947 racism and segregation were at an all-time high throughout the country. In Penn State’s bowl game against Southern Methodist University, there was pressure for the team to not allow the black players to participate in the game. But, the university and team did not comply and African-American player, Wally Triplett, reacted with the statement “We are, Penn State,” and so the chant came to be. 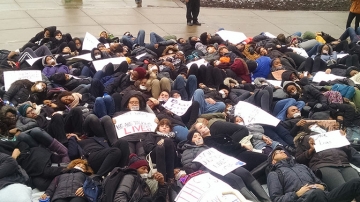 Penn State’s “We are …” chant is notable through the country for its origins of rebellion against racial discrimination. In recent years Penn State has been awarded multiple diversity awards in recognition of their “commitment to diversity.”

However, today at Penn State it could be said that some students on campus do not feel included in the ‘we’ of ‘we are.’

Jonathan Abu is one those students. He is the president of the Penn State chapter of the National Association for the Advancement of Colored People (NAACP) and he says he believes that Penn State can never be home for him. He says he especially felt discouraged about the Penn State community with response to the die-in protestss held due to high racial tensions in the country because of events like Ferguson and Baltimore riots, and police brutality against minorities. 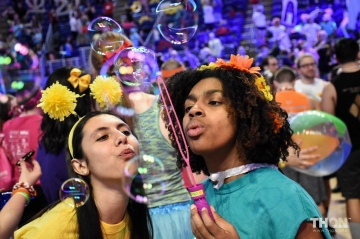 Other students like Jada Hill says they love Penn State. Although a minority she says she believes Penn State fosters the right environment for her to succeed. Although she participated in the die-in protests Hill says she’s “not gonna let a couple bigots or racists or people who don’t understand the history of the university” stop her from being included at Penn State.

Penn State prides itself on the inclusion of the student body in popular events like THON, Saint Patrick’s Day and Homecoming. Hill says she feels that these are effective ways to include students.

Hill says she has made it a personal goal to experience things that are outside her comfort zone.

"I was actually a dancer for THON this past year" Hill said.

The Penn State community seems to be split, having parallel opinions on who is included in the “We Are.” Some may experience a divided Penn State. For them, "We Are..." refers to the campus’ culture. While to others "We Are ..." refers to a current state of dissatisfaction, with some progress due to social justice initiatives.

Every year the Penn State Chapter of the National Council of Negro Women (NCNW) hosts the annual Penn State Black Family Reunion. The event has music, dancing and food and is a way for black students to come together where they may otherwise be alone.

Nana Kennedy-Kwofie is a Broadcast Journalism major with minors in Economics and African American studies. She is fluent in English and French. Nana is passionate about telling multimedia stories. She is currently an anchor and reporter for the Centre County Report newscast. Nana is a producer of the shows “The 5%” and “Zone In” with Penn State Network Television. In the the future she plans to pursue a career creating documentaries and news content.

I am a student at The Pennsylvania State University.