Out with the tides 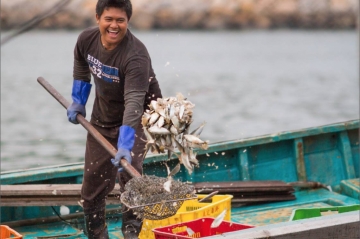 A fisherman tosses his traditional "capture" catch from a boat into a netted holding area at the Fisherfolk Village at Sok Kwu Wan on Lamma Island. Photo by Shuyao Chen

From the village Cheung has a clear view of the Aberdeen district of Hong Kong, where he grew up on a houseboat and now lives in an apartment tower.

Cheung used to make a living on his own fishing boat in Hong Kong, which was home to vibrant fishing communities before it became an international financial and trade center. His parents were fishermen. His elder brother was a fisherman.  Hong Kong’s fishing industry offered livelihoods to thousands of men and helped shape its cultures and traditions.

Cheung's fishing boat was part of the "capture" fishing industry, which skyrocketed in 1960s and hit its peak in late 1980s. The rapid expansion came at a cost. Over-fishing gradually became a crisis. According to Hong Kong government figures, the capture fish catch slipped nearly 30 percent after the 1980s peak, and 17 fish species were “over-exploited.”

A significant number of fishermen quit fishing. Others found an alternative that allowed them to to stay close to the life they had known since childhood. Organic fish farming was introduced in late 1988 and began to fill the region's voracious demand for food. 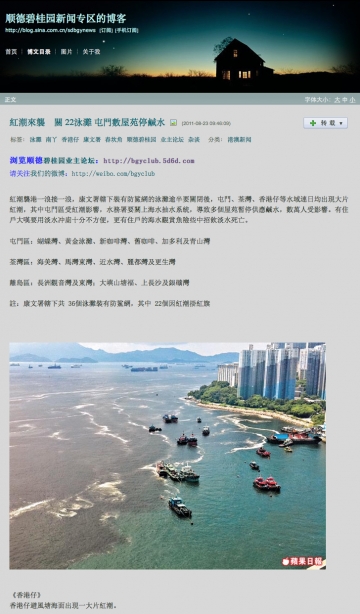 Scientists blogged about the frequency of Hong Kong's red tides on sina.com, including this algal bloom that extended into the Aberdeen Harbor typhoon shelter across from Lamma Island.

Fish farms were not the only thing becomong more common in Hong Kong's waters. Traditional capture fisherman had long cited pollution as being a major factor in the declining wild fish population.

Hong Kong is at the mouth of the Pearl River Delta. Upstream, Shenzhen was a sleepy farming village with a population of 30,000. Then in 1979 it was selected to be one of five special economic zones by the Chinese government. It is now a technology innovation hub for the country, headquarters for Internet provider Tencent, and home to more than 15 million people.

Anchored by Shenzhen and Guangzhou, the Pearl River Delta has become the largest megacity in the world. The region is home to about 120 million people, dwarfing Hong Kong's population of just over 7 million, but leaving Hong Kongers with the problem of dealing with the nutrient overload caused by human waste.

In 1998, a red tide outbreak fueled by mainland sewage and exacerbated by the effluent from fish farms struck Hong Kong waters, destroying 80 percent of the fish stock and causing an estimated US$32 million loss. More than 80 percent of Hong Kong's fish farmers were forced out of business.

Cheung was among this group, forced to abandon fishing on open waters by the efficiency of fish farming; then jobless again because the fish farm at Sok Kwu Wan was closed for health reasons.

Hong Kong's once prosperous fishing industry has become distant memories to old fishermen like Cheung, and a piece of remote history to younger generations.

“Normal people and the government do not pay much attention to what fishermen contributed to the Hong Kong story," Cheung told Agence France Presse in 2013. He was being interviewed as part of his new job -- manager and chief tour guide at Lamma Island's Fisherfolk Village.

The gregarious fisherman, now in his late 50s, eagerly shares his knowledge and experience with tourists who flock to the island for a taste of sea life and the chance to fish for grouper in the village's netted fish pens.

"Before I die, I want more people to know about this,” Cheung says.

(The video for this story was initially published on May 8, 2015. The text was updated in December 2015)