Penn State student Megan Lamb is a lot of things. She’s a junior with majors in Criminology and Women’s Studies. She is a counselor at the State College Community Help Centre and fields calls for the Crisis Hotline. She’s a member of Triota, the Urban Gaming Club, and the Power Lifting Club. 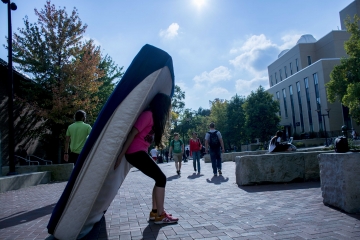 Penn State junior Megan Lamb is carrying a mattress across the campus in Penn State in solidarity with Columbia University student Emma Sulkowicz, who began doing the same thing a month earlier.
Photo by Jack Lukow

Lamb is also that person you’ve seen walking around campus with a full-sized mattress. With the help of hundreds of members of the Penn State community, Lamb has been carrying this 80-pound mattress for a week now.

“I’m helping to ‘Carry That Weight,'” said Ben Little, Lamb’s boyfriend. “I’m helping her move it around, because it’s really all of our burden to carry.”

Lamb organized this mattress carry at Penn State after reading about Columbia student Emma Sulkowicz, one of 23 students who filed a federal Title IX complaint last semester after she said the university mishandled cases of rape and sexual assault. Sulkowicz gained notoriety after promising to carry the mattress on which she was allegedly raped around Columbia’s campus as her senior thesis as a symbol of the burden that survivors of sexual assault carry around with them every day.

Lamb said she was sexually assaulted in her own dorm room, like Sulkowicz, by another student with whom she had been intimate in the past.

“This was someone who I met and we had sex, but I knew something wasn’t right with him. There was something about him that I wasn’t okay with,” Lamb said. “It got to the point where I cried and ran away from him. The night that this happened, I didn’t want any more involvement with him. I told him no, do not come to my apartment, I don’t want to have sex with you.”

Lamb said one of her friends from work planned to come over to her room that night, so he had asked Lamb to leave the door unlocked, since she was a heavy sleeper and unlikely to wake up to the friend’s knocking. Lamb left the door open for him and fell asleep. That’s how she said her attacker got into her room.

Lamb sustained numerous injuries. She had a bruised and torn cervix, lots of cuts and bruises, and some bumps on her skin. The injuries primarily occurred internally from the waist down.

“They had to give me like 14 different pills and a shot. They gave me some antiviral pills because I had no idea if he used a condom or not. The two antiviral pills they gave me, they told me, ‘You aren’t going to feel good,’ but I did not expect what was about to happen,” Lamb said. “I had these giant horse pills that I had to take to make sure I didn’t get sick from what someone else did to me.”

Lamb took the pills twice a day for two weeks. The pills made her so sick that she couldn’t keep food down, and they made her drowsy. “My life for two weeks became: wake up, take a disgusting horse pill, get it down, fall back asleep, and wake up the next time I needed a dose,” Lamb said. “It was a vicious cycle.”

At first, the pills just knocked Lamb out, but she didn’t have any nightmares. But soon, she began to have body memories. “I would just start freaking out, whether I was awake or asleep,” Lamb said. “But when you’re asleep, you have these night terrors, where your body thinks that it’s going through the trauma again.” 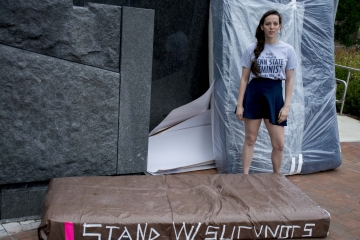 Megan Lamb says she was sexually assaulted in her Penn State dorm room. She says the mattress is heavy, and so is the burden that sexual assault survivors carry around with them every day. Photo by Jack Lukow

It was at this point that Lamb began to suffer from depression. Her body ached, she lost her appetite, and she couldn’t do anything but sleep. “I was so afraid that I was going to have to change my major or drop out of school, and that my whole life was going to change, all because someone else made the decision to have sex with me without my permission,” Lamb said.

“The police came to the hospital, and I said I didn’t want to make a statement. This guy had threatened to kill me, and I didn’t want him to know the police were involved in case that happened,” Lamb said. She said the detective told her that if she didn’t cooperate and give the police a statement, she would not be able to intern with the police in the future, to get security clearance, or to join the military, which were all things that Lamb aspired to do. “After about a half an hour of her saying all of these things and scaring me, this detective, she says, ‘Well, what if he does this to you again? What if he sees you on the street and you don’t see him?'”

Lamb finally agreed to write a statement, but decided that she would leave the perpetrator’s name out of the report for her own safety. She wrote several pages describing the alleged incident, and in her statement, she described the perpetrator’s appearance vaguely, but did not provide his name. That way, she said, if someone else came forward with a similar description in the future, maybe the police could make the connection, and she would feel safer to come out with his identity then.

According to Lamb, the detective wrote off the alleged rape on the basis that Lamb and her attacker had been intimate in the past. “My sexual past didn’t matter. It didn’t indicate whether I was a victim or not,” Lamb said.

Lamb said she devised three separate plans to kill herself after that.

“People who lie about rape have something to gain, maybe in like a custody battle or something. But I had nothing to gain. I lost everything. These charges make me look like a liar, like I’m dishonest, when all I tried to do was not get killed by this guy who threatened to do so if I told anyone about it.”

Lamb was charged with falsifying a report. Police did not have a comment on the incident except referencing the criminal complaint. No one else was charged in relation to Lamb’s incident.

After the charges were filed against her, Lamb was disenrolled from ROTC. She had to switch majors, and she stopped going to classes. “I didn’t have the energy to do anything anymore. I just wanted to put it behind me, and it was constantly just everywhere, and I couldn’t move past it,” Lamb said. “It was haunting, and it was heavy. It was so heavy.”

In the months since, Lamb has gone through counseling at CAPS. She joined Triota, began working at the Community Help Centre for its Crisis Hotline, and has flourished in a setting with like-minded people in her Women’s Studies classes. She has overcome her depression with the help of these organizations and the love and support of her friends, family, and boyfriend. It is through this healing that she found the strength and determination to replicate Sulkowicz’s mattress display, known as ‘Carry That Weight.’ 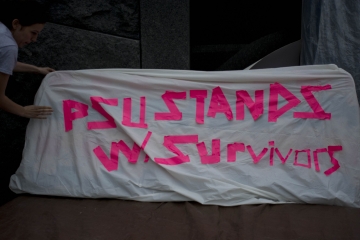 “This mattress carry has really helped me heal myself and other people. A lot of people have come forward to me and not just told me their own stories, but that they appreciate me doing this,” Lamb said. “It really shows that sexual assault happens here. It’s prevalent and in your face, and there are preventative measures. There’s education, and there are resources, and there are ways to help this cause.”

The mattress is heavy, and so is the burden that sexual assault survivors carry around with them every day. “The weight that’s metaphorically on me from the assault, and the weight I physically have on me with this mattress, it all just makes me stronger,” Lamb said. “I feel like I get to reclaim this public space without being afraid now. Carrying this mattress around campus, it’s my campus again. I was here before any of that happened, and it’s still my university.”

As far as Penn State’s handling of sexual assault cases in the past and their efforts to improve, Lamb was all optimism. “Penn State has been getting so much better at learning what consent is, and at handling sexual assault,” Lamb said. “I know some of the student organizations are working with the administration to take better measures to let people know about the issue.”

Despite its similarities to the Columbia mattress carry, Penn State’s particular event has had a lasting effect on Lamb, as well as the rest of those who have helped her carry the mattress around campus.

“One thing I hope people can take from this, whether it’s the mattress carry or just bringing up a conversation about sexual assault, is to be accepting of survivors. I still have bouts of depression, and they come out of nowhere, and you can’t predict it. My boyfriend has really helped me through everything, and he’s so understanding,” Lamb said. “It’s so important to have someone empathize with you and really try to hear what you’re saying and actively listen and help you out. I can’t express how awesome it is to have that understanding person in your life who will do anything that you need to help you get through it. I want to do that for everyone else.”

Lamb reiterated several times how important Sulkowicz’s influence has been in her recovery. “I just want to tell Emma to stay strong. She’s everything that I want to be. She’s creative, brilliant, strong, and I really appreciate that, and I’m so thankful that I came across that first article about her and that I’ve been able to replicate what she’s been doing,” Lamb said.

“I just want to thank her endlessly and give her a hug. Then maybe cry and hug her again.”

(This story was originally published in Onward State. Text by Alicia Thomas. Video by Jack Lukow, Aaron Andrews and Zack Rickens. Still photos by Jack Lukow. Music by Chris Zabriskie,  "There's Probably No Time," is used under a Creative Commons license from freemusicarchive.org/music/Chris_Zabriskie/ )