UNIVERSITY PARK, Pa. — For years Penn State students have had zero problems walking into Beaver Stadium. All students had to do was to swipe their student ID and receive a paper ticket that they would take in to enjoy the game.

That all changed this season since Penn State students are now required to change to a mobile ticketing system which has caused many problems and frustrations amongst students.

Some students, including Aman Amora, point to the lack of Wi-Fi at Beaver Stadium as a key problem with the new system.

“The ticketing system is kind of flawed due to their not being much internet connection near the stadium,” Amora said. “If students aren’t able to pre-load their tickets beforehand or if students accidentally swipe out of their app they aren’t allowed to get into the stadium, so I think it’s flawed and I think they need to make an offline mode for the ticketing system.”

The lack of Wi-Fi leads to problems such as lack of service within the app and hold ups on the lines of Penn State fans waiting to enter the stadium.

The change left many fans confused as to why the move was made and has many, including Josh Portney, wishing for a change back.

“I’ve been to Penn State games in the past and it was better,” Portney said. “This digital ticketing system is terrible especially when your phone dies and there’s no way of them letting you in.”

Students wonder if it worked so well previously, then why doesn’t Penn State go back to the old method.

“I really think they should invest in letting you swipe your card to get in or something different,” Portney said. “The roll-out wasn’t great.”

Students pointed out another issue with the ticketing system that it lacks a stronger ticketing exchange preventing many students from selling their football and hockey tickets. The new system also lacks the ability to purchase guest tickets.

Penn State has two more home games remaining on the year but many students believe a flawed ticketing system may ruin their Penn State football experience.

Logan Bourandas is a freshman majoring in broadcast journalism. To contact him email lxb5412@psu.edu. 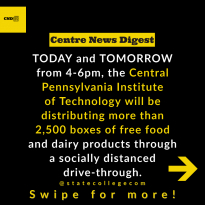