Paul Frankhouser is a 1965 Penn State Alumnus who believes in creating the ultimate tailgating experience…for everyone. 30 years ago, when he started tailgating seriously, he looked around at Beaver Stadium and did not like the way he saw visiting fans being treated by fellow nittany lions. That is when Frankhouser and friends decided to create their mission to make Happy Valley a happier place. Over the past thirty years, Frankhouser has attended hundreds of home and away football games, bringing with him the spirit that has captivated thousands. 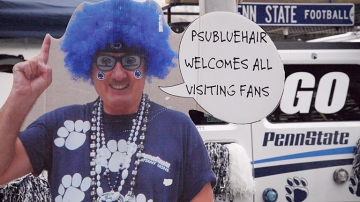 With his family, friends, and decked out Penn State hummer by his side, he brings the party everywhere he goes. His love for Penn State goes far beyond the tailgating field, all the way to his home in Happy Valley. With a pristine view of Beaver Stadium from his back porch, his house is something of a museum for all things Penn State. He enjoys going on EBay and collecting memorabilia such as signed player pictures, Joe Pa cut outs, PSU toys and much more.  He even has a mural of Joe Paterno and himself breaking through a wall painted above his fireplace!

Through tailgating, collecting fan treasures, bleeding blue and white, and all things in between Frankhouser has earned himself a spot in the Penn State hall of fame for most dedicated fan. That is why he has been awarded by the university for the lifetime achievement award of best tailgates at Beaver Stadium, an honor Frankhouser was more than proud to accept.

Tailgating with Frankhouser can be a unique experience. Three fans describe their memories.

I am interested in working in the production field, ultimately for late night television. I have interned for Larry King in production in LA and am fluent in Spanish.