A rusty broken lamp stood in the corner of the room, creating a golden glow upon Brian Walker’s face. The Houseasaurus living room where the lamp stood was beginning to fill up with people from all different walks of life. Walker, on the other hand, sat in a chair more fixated on the guitar sitting on his lap. He began tuning his guitar, playing a few riffs back and forth while asking Olivia Price what she thought. Price just watched patiently as she pressed a bottle of Blue Moon to her lips.

The Houseasaurus Co-op is located on the 800 block of West College Avenue -- about a 20 minute walk from Penn State’s campus. The Co-op has become a hot spot in the local State College DIY music community. Over the past few years, many local musicians within the Penn State community have flocked to basements and living rooms when it comes to performing. Houseasaurus is one of those places, as it holds small concerts every few weeks.

Penn State’s “house show” scene has become a counterculture to the norm of Happy Valley partying. Many students choose to skip the bar lines and migrate toward West College Avenue. Guests of the house show are often asked to pay a small cover charge upon entry -- this covers everything from the band’s gas money to booze.

One of the headlining acts is alumnus Brian Walker. He graduated from Penn State in 2011, and has since moved back to his hometown of Philadelphia. He’s currently a popular name with in the Philly music community. Walker plays music under the name “A Day With Out Love” and travels to local’s bars and venues around the city. Walker’s lyrics are raw and original, he uses music as an outlet to discuss mental health and how it has affected him through out his life.

During is time at Penn State Walker founded the Penn State Songwriters club, a club still a pominant group on campus today, having a large turn out at weekly meetings. Walker created a place for young musicians like himself to collaborate and make original music. Walker had no idea what would become of it in the upcoming years.

As the club expanded the performers in Songwriters Club decided to have a  benfit concert to  to help fun the groups activites. Walker and his friends threw the first house show on 420 W Foster Ave., and the line to get in wrapped around the block. After that, Walker knew house shows were here to stay.

His newfound success, and the success of house shows after that, spawned new, similar dedicated houses like “Casablanca” on Park Avenue. Walker left in Happy Valley in 2011 but house shows began to pick up speed having opened new houses with in the next few years.

Walker owes his success in Philadelphia to the Penn State DIY scene, “[State College] is home to me its where I started, its were my project started." He said "Granted it’s been 5 years I’ve played a show here, it will always give me that grass roots feel.  This is how I learned to communicate with people, this is how I learned to book shows, this is where I learned to be entertaining,” Walker explained. “ Its always going to feel like home to me that’s what I like about State College.”

Olivia Price, Walkers current tour mate is no stranger to the DIY scene. Price graduated in 2015 but has returned to her stopping grounds several times playing gigs under the name “Fossil Jane”. Price has made a name for herself during her time as a student, playing in several acts such as Flowers De Moon, Queue, and the Sea Offs. She has collaborated with  many current DIY members in some way or another. Price and Walker made a quick pit stop in State College in between Pittsburgh and Lancaster. 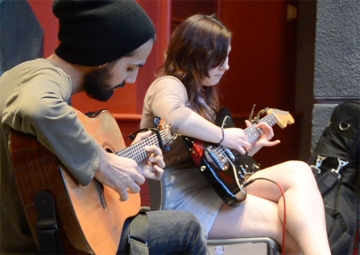 Price performs with Rashmit Arora of the Sea-Offs, one of the many local acts she is a member of. Photo by Shannon Audrey Fox

Price has grown as an artist during her time in Happy Valley. She returns often to play house shows through out the year. Each trip she is greeted with open arms  and embraced by her local fans. She says, “In my experience in State College everyone likes to embrace the weird and off beat and so you come into a State College house show and you feel like you can be yourself. That’s awesome there is no social norm.”  Price said.

Many of the artists and fans with in the community are members of various campus clubs and activates. One of those clubs is Students Organizing the Multiple Arts  (SOMA). SOMA holds several events throughout the year to help promote the student artists around Penn State, many of those events being house shows to benefit the club.

Every April SOMA holds “ Arts Crawl,” an annual event that combines different art mediums into a one-day festival of sorts that takes over North Campus. SOMA brings in local and traveling music artists to perform throughout the day on stages scattered in and around the Visual Arts, Patterson, Palmer, and Stuckeman buildings.


As the Spring semester wraps up so do the house shows. However, the Artists who will be returning in the fall hope to keep the momentum going. The DYI scene is here to stay.

Shannon is currently a senior journalism student who aspires to work in the field as a multimedia, print, and radio reporter. She is currently a writer for Onward State, Penn State’s student run news blog. She has previously contributed stories to NPR, iHeart Media, and Spoon University.