A look at Election Day 2012 through the eyes of the Advanced Photojournalism students in the College of Communications. 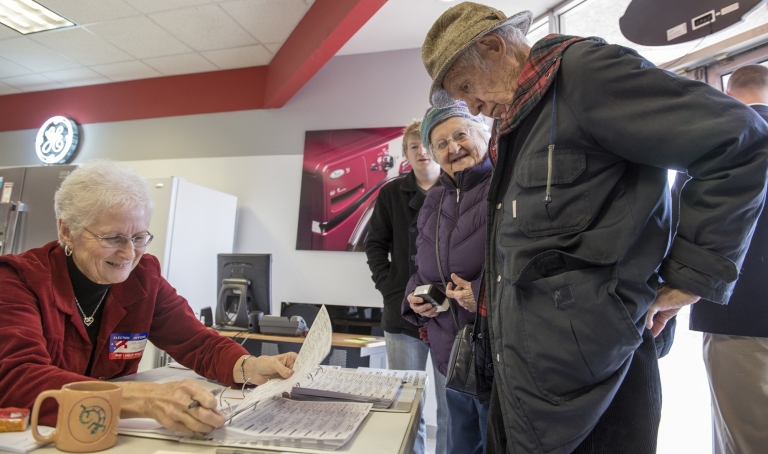 Glen Mower checks in with his wife, Anne, to cast their vote in the 2012 Presidential election at Mike's Video, TV & Appliance in State College. Glen and his wife have been voting for over 70 years. / Photo by Chris Lipfert

An American flag hangs outside the Coleville Election House in Bellefonte, Pa. shortly before the polls opened. 619 Bellefonte residents are registered to vote at the one-room polling place. / Photo by Sara Matulonis 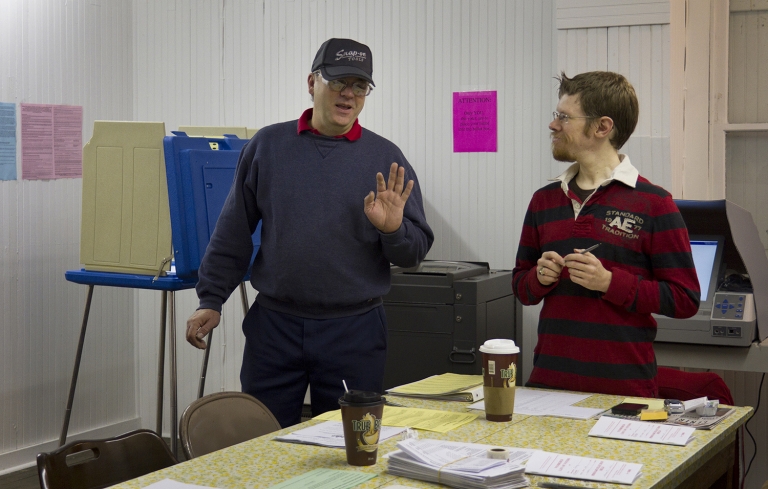 Before the polls open, volunteers Jack Miller and John McKinstery go over the Election Day procedures with the four student volunteers from Bellefonte High School who are assisting them at the Coleville Election House in Bellefonte. / Photo by Sara Matulonis 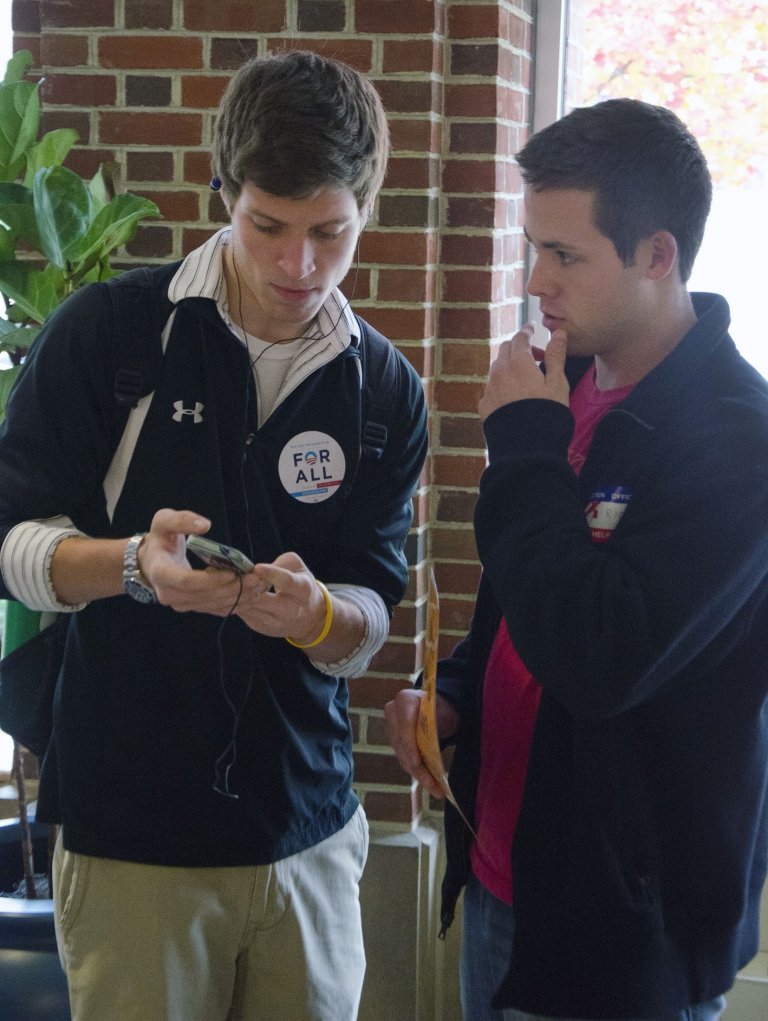 Alex Morelli, left, talks with Rick Soulas, a student-election worker with the Centre County Commissioner's office. Soulas was directing students to their correct voting location within the HUB-Robeson Center at Penn State. / Photo by Andrew Tarr 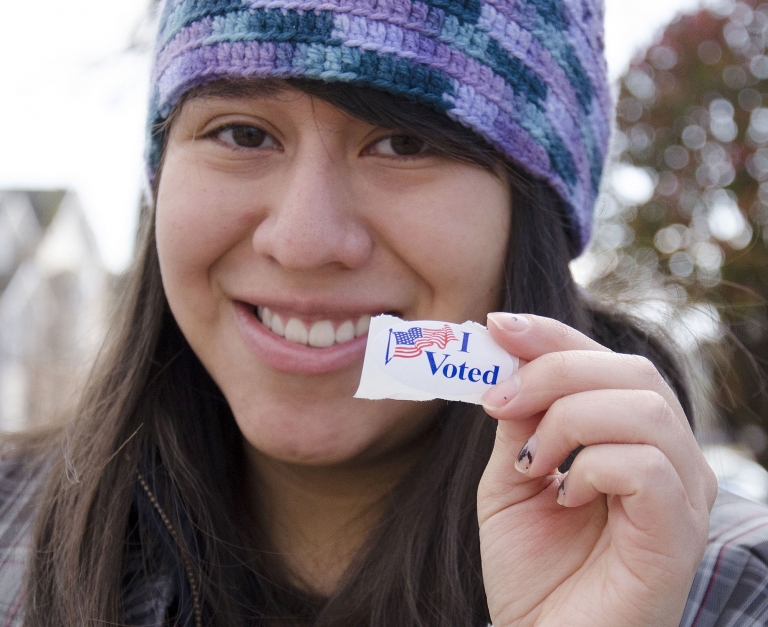 Jessica Ruiz, a junior bio-behavioral sciences major at Penn State, votes for the first time at the Park Crest Terrace polling place in State College. "It's important to vote because it gives me a voice, even though it's one voice it still matters", said Ruiz. / Photo by Nina Abbott 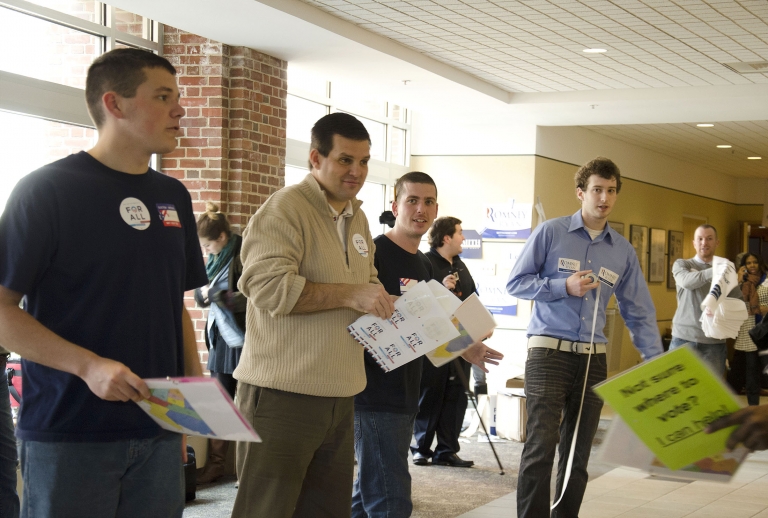 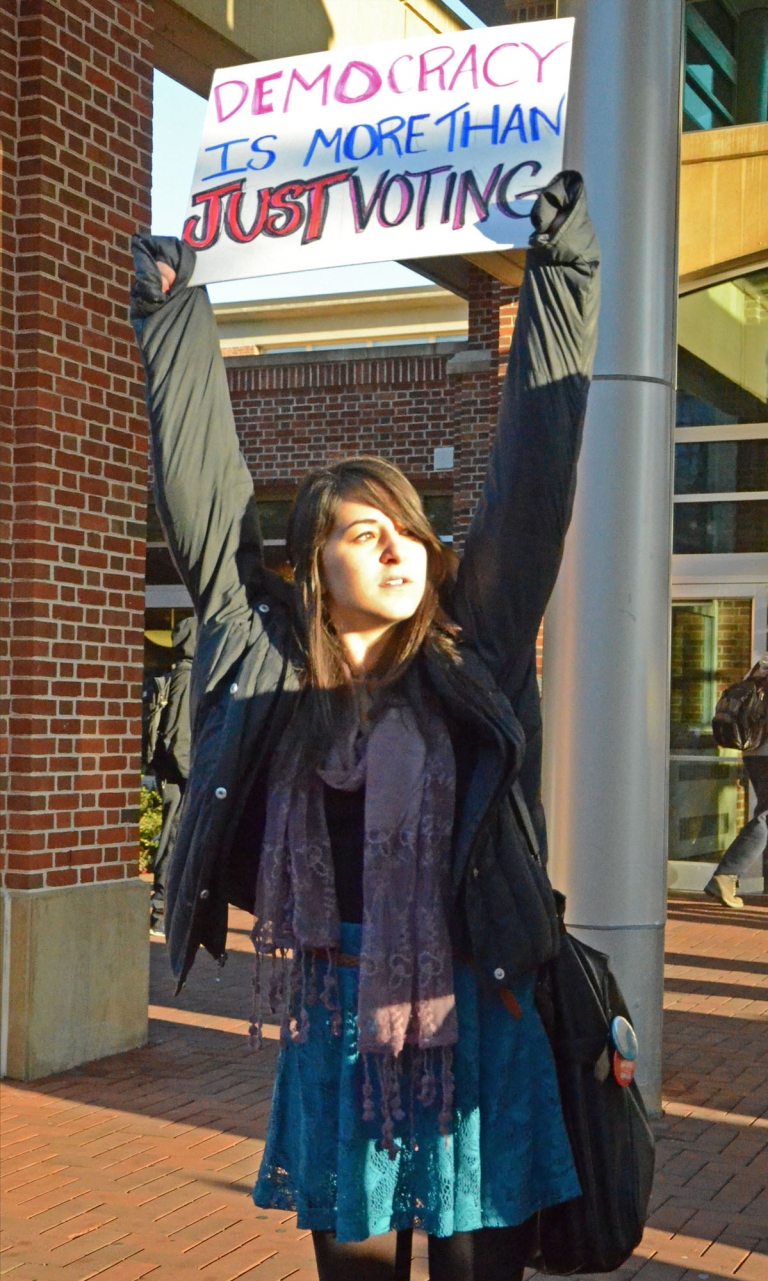 Julie Mastrine, a sophomore public relations major, demonstrates outside the HUB-Robeson Center as students vote at a polling place inside / Photo by Sierra Dole 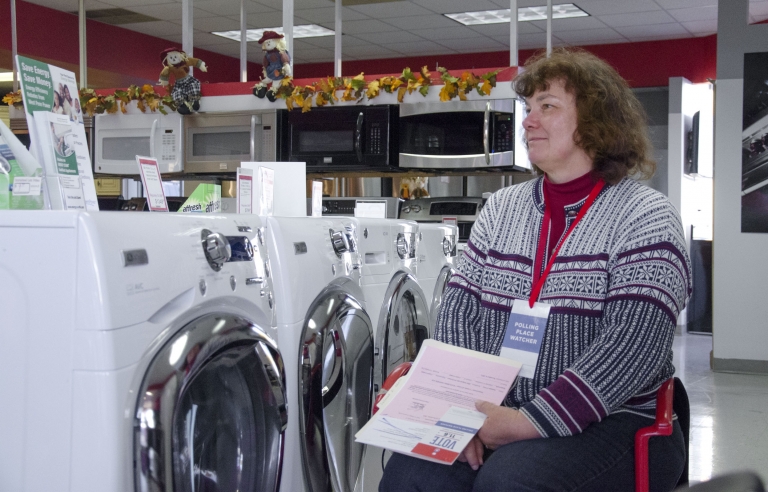 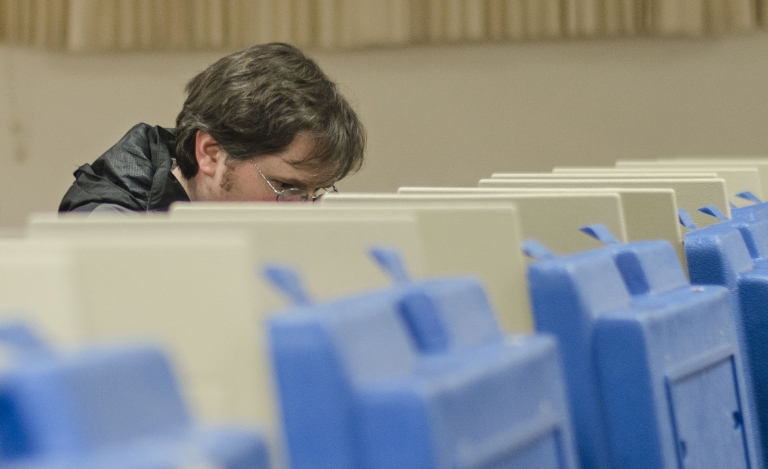 James Bleil places his vote at the polling place at the Knights of Columbus on Stratford Drive in State College. / Photo by Steven Osborn 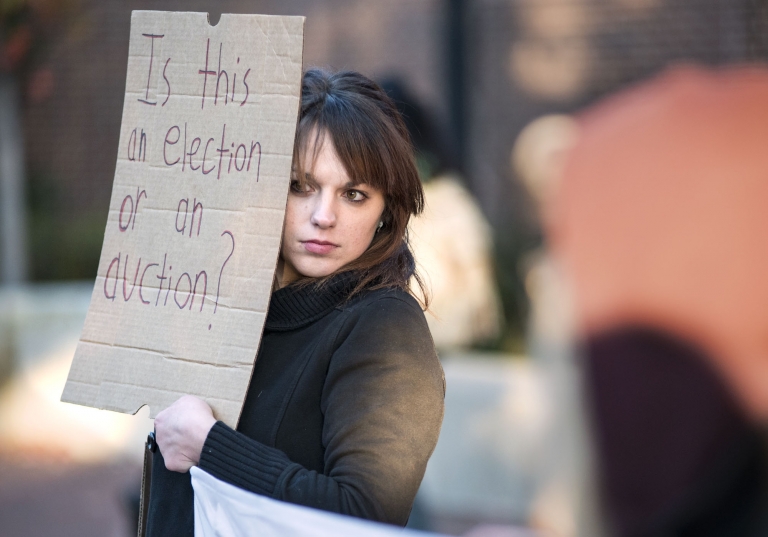 Penn State senior Sloane Shearman holds signs outside the entrance to the HUB Robeson Center protesting the state of American politics. The HUB is the voting location for the majority of Penn State students. / Photo by Dave Cole 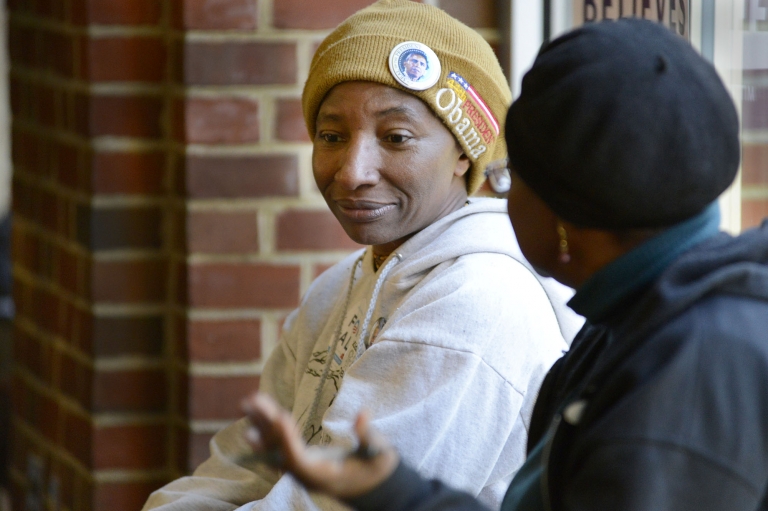 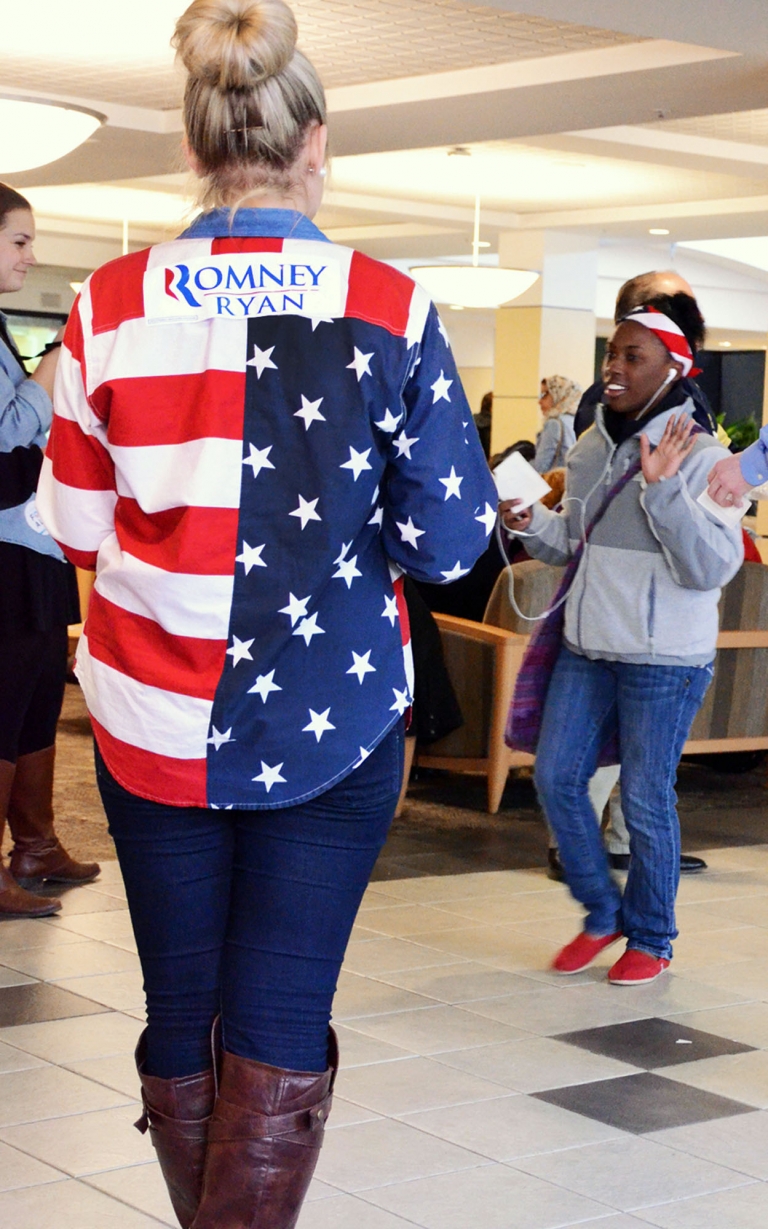 Students volunteering in support of both the Republican and Democratic parties lined the hall of the HUB-Robeson Center to greet voters on their way to vote. / Photo by Kristen Hopf 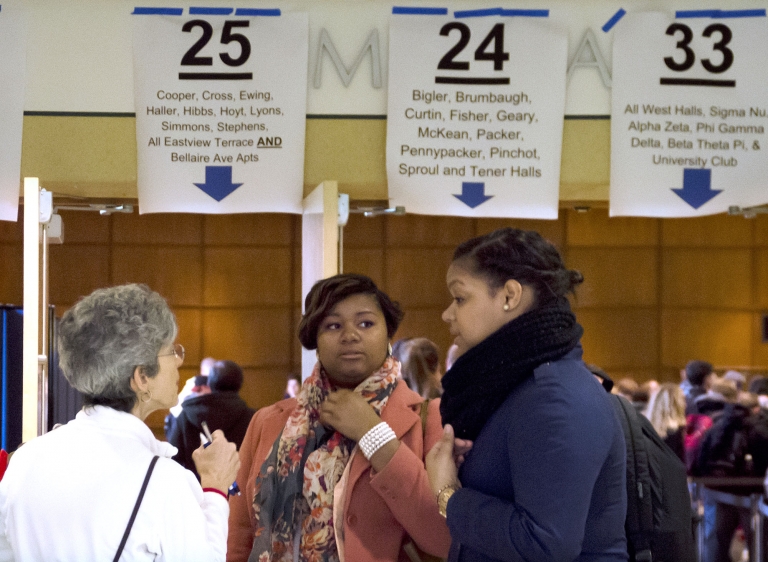 Laura Brown, left, head of PSU Votes, recruits students in the HUB Robeson Center to sign a petition in favor of giving all Penn State students Election Day off from classes. / Photo by Katherine Rodriguez 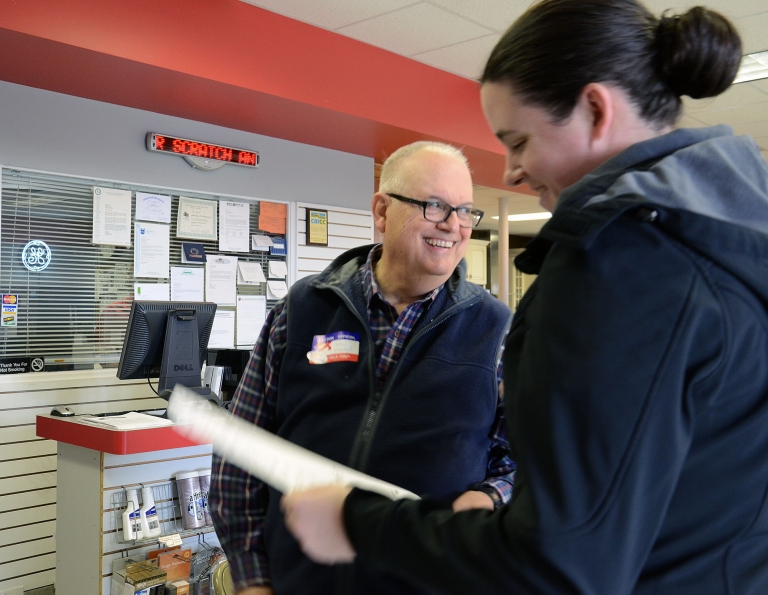 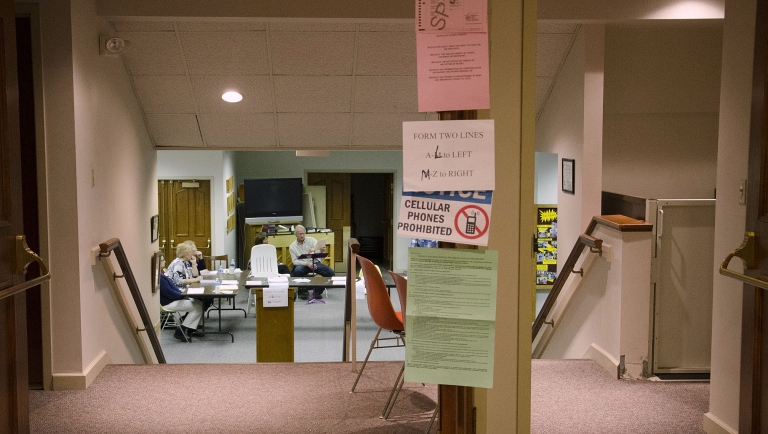 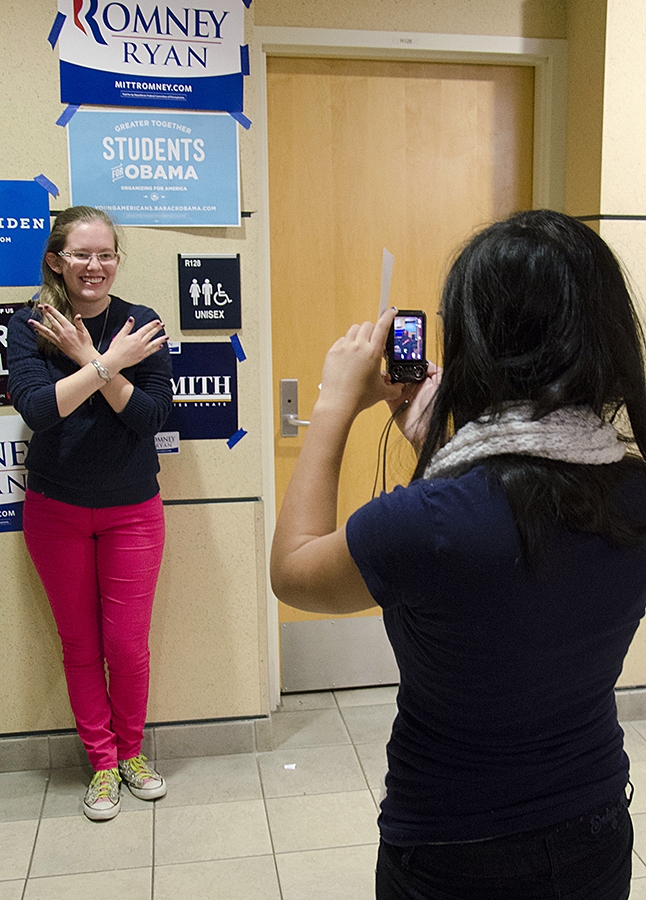 Voters pose in front of political posters by the HUB polling location on Tuesday night. Photo By: / Photo by Lucia Sofo 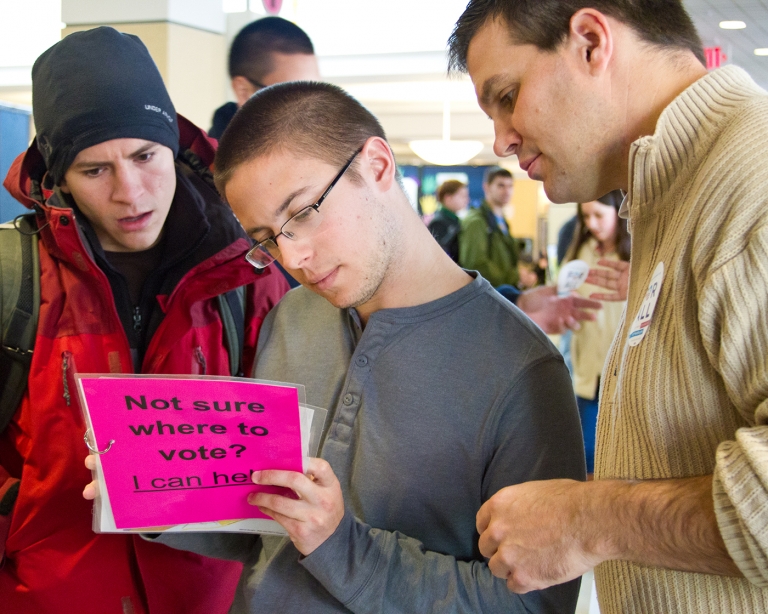 Jay Paterno, right, volunteers at the polls on Election Day with Penn State student Ryan Kristopik. The two help to show a voting student which line in Alumni Hall he should stand in to vote. / Photo by Savannah Smith 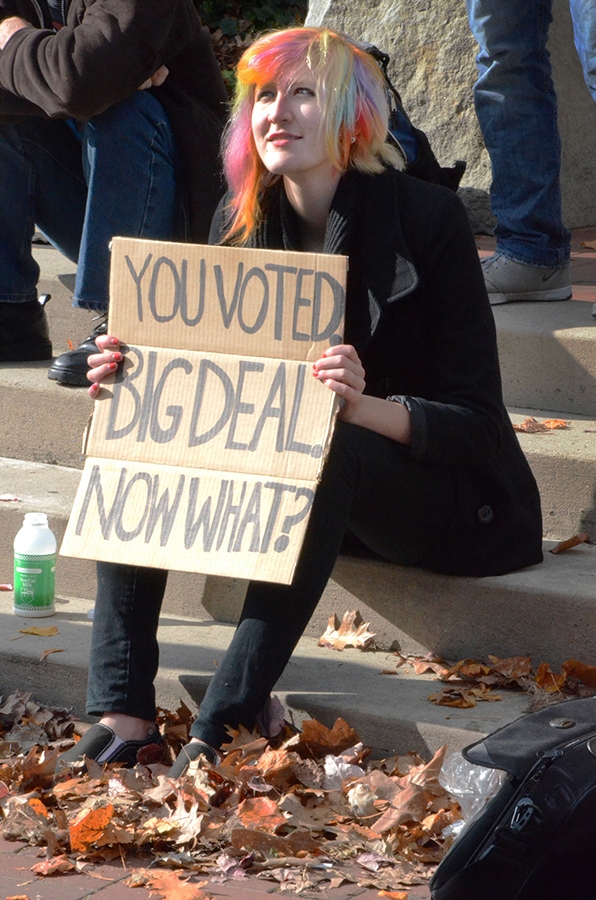 Amanda Dash sits outside of the HUB-Robeson Center as students vote inside. Dash was protesting with the group, Students for a Democratic Society. / Photo by Shannon Holzer 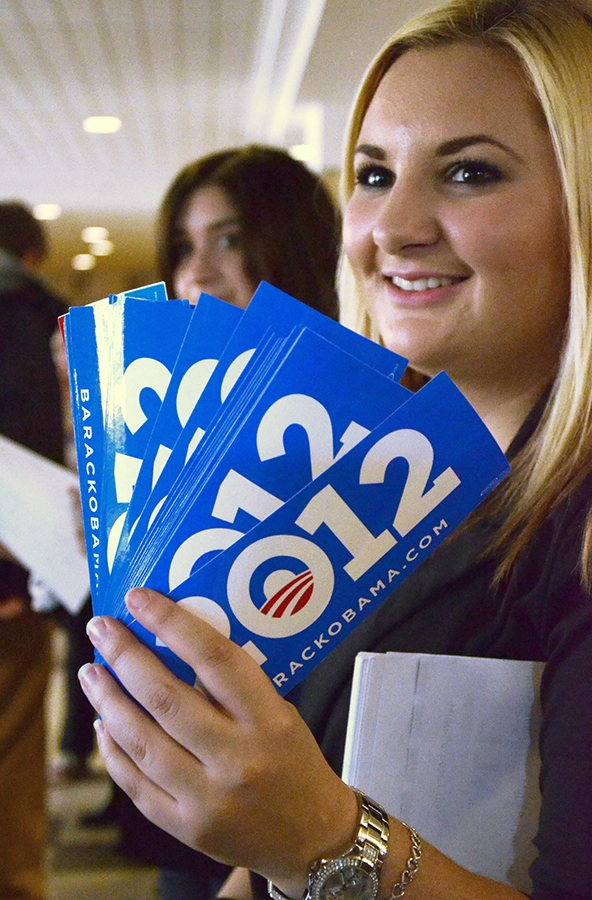 Sara is a student at the Pennsylvania State University and will graduate in May 2013 with a degree in Visual Journalism and minors in Geography and International Studies. In June, Sara will begin her two-year commitment as a 2013 Teach for America corps member teaching secondary mathematics to students in Jacksonville, Florida.

Irene Yiu is a senior majoring in visual journalism and art history. She has interned at China Daily as a business reporter in Beijing, China. Also had experience in NYC Downtown Magazine as a fashion photographer. Yiu is currently residing in Manhattan, New York.

I’m a junior double majoring in visual journalism and psychology. I’m a junior photographer for The Daily Collegian. I’m on the Penn State Track and Field team and I’ve lived in State College for 11 years. I love meeting new interesting people and expanding my portfolio.

Nina Abbott is a Senior majoring in Visual Journalism with a minor in English. She is a staff photographer for Valley Magazine and has had internship experience.