Courtney Testa is a junior studying broadcast journalism here at Penn State University. Since her freshman year, Testa was determined to get involved with PSNtv’s network, in pursuit of getting more experience for her journalism degree. After hearing about PSNtv’s newest show, a dating show called PSU Matchmaker, Testa couldn’t pass up the opportunity to be a crewmember. At first, her main priority was just to learn the ropes. That is, until the executive producers at the time, Cameron and Gabby, asked her if she would step in as one of the three bachelorettes. On the very first pilot, Testa had the opportunity to meet one of Penn States finest, Jordan Lucas, in the role of the bachelor. 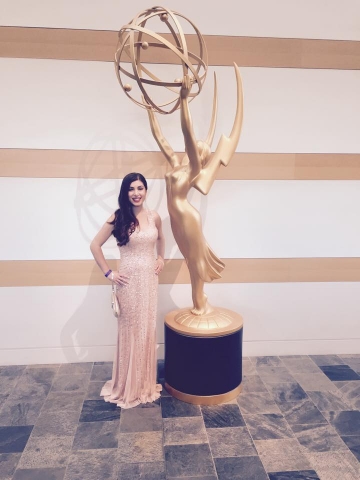 After receiving 527 views on YouTube, Testa knew this was a television show she was dying to be a bigger part of. Taking on all the responsibilities of an assistant producer when she was only a crewmember, the production team soon took notice and gave her the official title. Shortly after the executive producer was offered an opportunity for an internship in Los Angles, Testa was promoted to Executive Producer along with another crewmember, Terrin Hartman. Testa enjoys the creative aspect of this show and knew that this would be a great fit for her. Eager and excited to see what the show had to offer, PSU Matchmaker’s first episode after the pilot aired last fall 2014.

The premise of PSU Matchmaker is a dating service where a bachelor or bachelorette looking for love will go on three blind dates with different potential suitors.  Throughout the date they will get the opportunity to converse with one another and then afterwards they will individually review how they think the dates went. After all three dates are over, the bachelor or bachelorette will choose a lucky winner. Testa’s main responsibility as executive producer is to find these contestants their matches, based on the information they have provided her for their likes and dislikes. She will then organize the days for filming, Matchmaker meetings and makes sure everything runs smoothly.

Because the show has had such a great run, Testa – along with Hartman and Johnson – decided that they would submit three episodes and a promo to the Television Academy Foundation just to see what would happen. Little did they know, PSU Matchmaker was chosen as one of the top three contenders for a College Emmy award. Testa will be attending the Emmy’s on April 24, 2015 in hopes that PSU Matchmaker will win the prize. Shocked out of belief, Testa says it still feels like it’s all a dream. A show she has put so much time and dedication into is finally paying off and she couldn’t be any more ecstatic.

In the future, Testa hopes that PSU Matchmaker will continue to produce great shows so it can continue to flourish and provide an outlet for other creative minds much like it did for her. More importantly, she hopes that other incoming freshman, sophomores or juniors will get the same opportunities to move up in the PSNtv Network as quickly as she did, so they too can learn what it takes to be an assistant or even an executive producer. PSU Matchmaker has given her an opportunity of a lifetime, one that she will always be thankful for, and she cannot wait for what the future has to hold.

Video:  PSU Matchmaker the stuff they should have shown

PSU Matchmaker is all about finding love. However, behind the sense is also where the magic happens. Here on PSU Matchmaker, many hopefuls forget the camera is still rolling as we catch them in action.

Valeria Merced, a crew member on PSU Matchmaker expresses her feelings towards being on the show, and working along side of Courtney Testa.

Hello, my name is Lennette Benzo. I am a senior graduating from Pennsylvania State University this August of 2015. I have always been very interested in the production and broadcasting field of entertainment from a very young age, therefore I am pursuing a bachelor’s degree in the Telecommunications field. I would love to work for ENews or MTV to learn more of the production aspect of this industry and work my way up to become a leading host for ENews or any available leading positions on MTV.

A Person And Their Passion