Jerry Valeri hosts his own show in the mornings for Centre County’s country radio station, Big Froggy 101. The show runs live from 6 a.m. to 10 a.m., requiring Valeri to be at the station at 4:30 a.m. and staying until the early afternoon preparing for the next show. Not only is Valeri a voice for country music listeners in the morning across multiple counties, he’s also a full-time husband and father.

Between being a dad and a radio show host, he often has to leave work to pick up his four-year-old son, Evan, from school. Luckily, he lives in the neighborhood across the street from the studios and is able to balance his home life with his work life in a rather unusual way than most parents. He brings Evan to work with him in the middle of the day two to three times a week.

After the show ends and he has recorded it, he goes through all four hours, choosing his best segments, and cuts them down into separate files to put on the Big Froggy 101 website. About an hour after the show ends, he goes to pick up Evan. “I have a certain amount of flexibility that I can work with,” Valeri says of his schedule, “If I have him for a couple hours during the day it doesn’t really bother me at all. I can just pop over here and finish things up when I need to.” 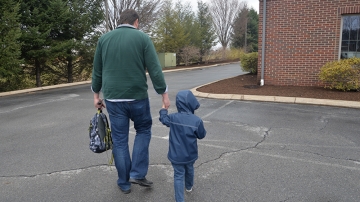 Jerry and Evan walk into work together during the middle of the day about three times a week, re-capping Evan's morning at school and talking about anything that entertains Evan. Photo by Jessica Reilly

After picking Evan up, Valeri brings him back to the studios and Evan, being a four-year-old, has the time of his life running around the station, playing with his monster truck toys and talking to all the other employees at Forever Media that gush over his cuteness. “I try to do some office work, but I can’t really edit anything, I can’t record myself, I can’t do commercials with Evan with me,” Valeri explains, “I try to keep an eye on him and keep him in my office.”

Keeping Evan in the office becomes a struggle sometimes, because he is such a young child. Most people could think that this would cause a hostile work environment with Valeri’s boss, but it’s the polar opposite. “I want my employees to be able to be the best that they can be when I need them to, and having a flexible work environment for them adds to that,” Chris Prospero, Valeri’s boss, says. “He’s a great morning show host everyday, and I have two kids, so I understand that it’s hard to balance. I leave to pick up my daughters all the time.”

Valeri always appreciates how his job makes it easy for him to be a father all at once. “Forever Media couldn’t be better about it,” Valeri explains as he gets Evan’s favorite lunch, mac and cheese, ready for him in the company kitchen. “I still try to get my work done and I don’t allow him to disrupt people while they’re doing work, but he’s four, so it gets a little out of hand every once in awhile and nobody ever looks at me sideways or gives me any grief about it what-so-ever. This place is filled with fathers and sons and they know how it goes, so everybody’s been very understanding.”

Valeri makes it known that it isn’t easy balancing work and his family, but he is always grateful for the environment his co-workers allow him and Evan to have.  “Everybody we work with here, they are so welcoming to him. They play with him, they humor me when I have him and they allow him to be a kid and me to be a dad.”

Evan might be a bit of a distraction at the workplace for Jerry Valeri and his co-workers, but as a four-year-old, he manages to preoccupy himself when no one has time to play with him. His favorite toy and only thing he can talk about are his monster trucks. He has over thirty trucks at home, and Valeri allows him to bring in at least ten to play with when Evan has to come to the station. Evan explains all the different trucks with impressive memory of all the names.

Jessica has completed three internships with radio stations throughout the State College area and a fourth internship in Center City Philadelphia. She is a member of the ComRadio sports department and has developed a passion for radio and promotions throughout her college career. Jessica hopes to work on air and in the promotions department for a broadcasting company after her graduation in May 2015.

More Than Just An Athlete