Recovering in the kitchen

When Alex Burghardt collapsed on his kitchen floor in October 2015, he knew something was very wrong.

At first, Burghardt, a senior plant science major at Penn State, just thought he was depressed and anxious, especially about graduation.

After heading to University Health Services in September to try to improve his depression and anxiety, Burghardt discovered he was underweight, as well.

“I was running at the time, so I thought by just cutting out ‘bad for me’ foods, I could become a better runner,” he said. “But, it was just a distraction from what was going on around me.”

His psychiatrist told him he probably had an eating disorder, but Burghardt didn’t think much of it at first.

“I never thought a guy could develop something like that,” he said.

However, things got worse from there.

Because he was not eating enough to properly fuel his body, Burghardt consistently felt exhausted and depressed. He said he would pant after going up a flight of stairs and sometimes fell asleep at 8:00 at night. He knew this was not normal for a person in his 20's.

Burghardt said the severity of his condition really hit him when he realized he was afraid of certain foods and refused to eat them.

“I also avoided social settings at all costs just so I wouldn’t have to be around foods and people,” he said. “It would bring too much anxiety.”

After collapsing in his kitchen from a sharp pain in his stomach, Burghardt said he and his parents knew he needed to get help.

“As much as I didn’t want to leave Penn State, because I love it here, I had to,” he said.

Burghardt then started treatment at Hershey Medical Center for the rest of the semester.

“Hershey was one of the best things that ever happened to me,” he said. “It helped me come out of that state of sickness and meet people of all different backgrounds. It helped me become more open minded and see past what I thought I knew.”

Burghardt said his family also helped him through his struggle and continue to help him today by being supportive and holding him accountable.

“To see him go through that was tough, but it really unified our family,” said his sister, Sophia Burghardt. “It made us all so much more caring and aware of each other.”

She said small talk is a thing of the past for them, and they always make sure they are being honest with each other if they need help.

After returning to Penn State in January 2016, Burghardt started The Recovery Kitchen, a food-based blog that also focuses on eating disorder recovery. 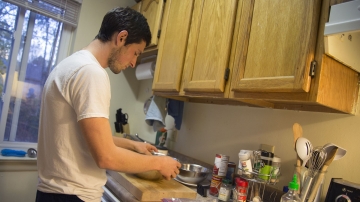 From his apartment kitchen, Burghardt runs his own food blog, The Recovery Kitchen, to share his love of cooking and eating disorder recovery with others.

As someone who enjoys taking pictures and making videos, Burghardt said a blog was something enjoyable that he could do at his convenience.

Burghardt said he is still in recovery, and the blog helps him not only to connect to others who may be struggling, but to also hold him accountable to make meals and eat them.

Burghardt features many different types of recipes on his blog, but he said his favorite is Slovak cuisine.

“Not necessarily because it’s the best tasting stuff, some may argue it’s some of the worst tasting stuff,” he said. “But, I like it, just because there’s a cultural tie and a heritage aspect to it.”

Burghardt said he comes from a family of cooks with eastern European ties who taught him what he knows today.

“Throughout my treatment, I would tell people that cooking was one of my passions,” Burghardt wrote on his blog. “Although I took ‘healthy eating’ to the extreme, I didn't necessarily have a fear for the kitchen.”

While spreading his love for cooking and his recovery on his blog, Burghardt also hopes to end the stigma surrounding eating disorders.

“There’s so many parts on the spectrum of an eating disorder, it’s not just being stick thin,” he said.

Burghardt explained that people often associate eating disorders with white females. He said while it has been ingrained in people’s minds that a person should look a certain way to have an eating disorder, that is definitely not the case.

According to the National Eating Disorder Association, in the United States, 10 million men and 20 million women suffer from a clinically significant eating disorder at some time in their life.

Burghardt said that there is a lot more that goes into an eating disorder than just cutting out certain foods to look a certain way.

He advises others who may be struggling with an eating disorder to get the help they need before it’s too late.

“Even if you feel like you don’t need help, still get it,” he said.

As for The Recovery Kitchen, Burghardt hopes to keep it going as long as possible. He said he strives to inspire others, even for just a few minutes while they read his posts.

“My Recovery Kitchen isn’t necessarily one place, it’s not just this kitchen,” he said. “It’s the mindset of cooking for myself and others, and eating it and liking it.”

The apple to my pie

Alex Burghardt said that he loves to cook with his family members when they get the chance. Sophia Burghardt, Alex's sister, talks about one of her favorite cooking memories with her brother. Having struggled with an eating disorder herself, she explains how the two have coped together.

One meal at a time

Alex Burghardt said that his food blog helps hold him accountable to make meals and eat them. One meal at a time, he is on his way to a full recovery.

Paige hopes to work as a news producer after she graduates in May 2017. She has interned at Fox News Channel in New York City and WPXI-TV Pittsburgh.  At Penn State, she is the executive producer of Penn State Network News and a producer for 46 LIVE. She previously worked as a reporter for The Daily Collegian and an editor and reporter for The Behrend Beacon at Penn State Behrend.