The Miller family from West Berlin, PA is a bereaved family who participates in the Adopt A Family Program with Penn State’s IFC/ Panhellenic Dance Marathon, THON. The Millers became a Four Diamonds family in 2005 when their daughter Kyla was diagnosed with a rare form of brain cancer. They did not immediately become a part of the Adopt A Family program, pairing with Penn State student organizations upon Kyla’s diagnosis.

THON is the largest student run philanthropy in the world and has two main missions: one is to raise money for the Four Diamonds Fund, all precedes benefitting families with a child with cancer and the other mission is to foster relationships with Four Diamonds Families who take part in the Adopt A Family program. There are three positions those families who are a part of the Adopt A Family program could possibly be in. The first position is having a child in active cancer treatment at Hershey Medical Center. The second position is having a child who is cancer free. Lastly, there are the bereaved families, like the Millers, whose child has lost their battle against cancer.

The Millers are big fans of NASCAR and had a family tradition of going to Charleston, SC each year for the Daytona 500 which happened to fall on the same weekend as THON. Being that they did not know what they were missing out on, they chose to stick with the tradition that they knew they all enjoyed as a family. When Kyla’s health took a turn for the worse in 2007, the oncologists at Hershey Medical convinced the Millers to become “adopted” and they were paired with the Greek organizations Sigma Kappa and Sigma Phi Epsilon. The oncologists tried to explain in words what it truly was like to have the support of a Penn State organization, but it was something that the Millers realized was impossible to understand from the outside and somewhat impossible to explain the magnificence of from the inside.

While there are aspects of the Adopt A Family program that the Millers enjoy, Steph says that it is unfortunate being a Four Diamonds family, because that means you have a child with cancer. In the Miller’s case, their worst nightmare came true when Kyla passed away, right before her tenth birthday, in the family’s home. Steph and Randy, along with their two pre-teen sons, Mac and Ryan think that THON is the experience that keeps them connected most closely with Kyla.
Along with THON, there are many things that keep Kyla’s memory alive to the Millers. The Miller’s home is decorated almost identically to the day that Kyla passed away. The walls are covered in pictures of Kyla alongside friends and family members. The shoes that Kyla leftby the door, remain by thedoor. Her bed is still covered in her Disney Princess comforter, her shelves lined with her dolls andother ceramic figurines.

Randy explained that even a ladybug sitting on their windowsill reminds them of their precious daughter. On the cold winter night that Kyla was conceived, there was a ladybug on the door of Steph and Randy’s room. The couple thought that it was peculiar because of the season, and from that moment on it became a symbol for their future daughter. When Kyla passed away, they encountered a number of ladybugs in the days that passed, and then finally one on her grave the day of her funeral. Since then, frequently when the Millers are doing something that reminds them of  Kyla, a lady bug appears.
The Millers passed this belief along to the members of Sigma Kappa and Sigma Phi Epsilon a few years ago when Steph gave her traditional pump-up speech to kick off a new year of fundraising. At first, the members thought they were somewhat insane for believing that their daughter was now a ladybug. Shortly after, members started coming across ladybugs whenever they were doing THON related activities. 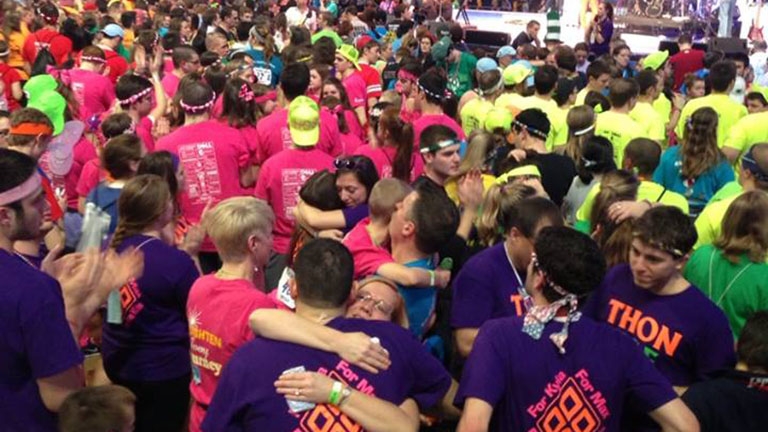 After being paired with the same organizations since 2007, the Millers have very tight bonds with many members, both past and present. They attend football tailgates, host a canning trip, and also attend a pasta party the weekend before THON. They try to grab a quick meal with members when they visit Penn State and members especially enjoy taking a trip to the Miller home for a mid-week home-cooked meal when they need a break from the realities of the life of college students.

The Millers do not plan on ending their journey with the Four Diamonds or Sigma Kappa and Sigma Phi Epsilon in the foreseeable future, especially with two sons who wish to be Penn State students and active members of THON organizations.
Kyla’s brother Mac respects what the members of Sigma Kappa and Sigma Phi Epsilon do for his and other Four Diamonds families. Mac was only a few years old when Kyla passed away, but says his big sister is his hero and one day, he wants to go Penn State and dance in THON in her memory. He grew up a part of the Sigma Kappa, Sigma Phi Epsilon THON family and one days wants to do his part, along with them, for the cause, dancing in THON for in his sisters memory.

Everywhere the Millers look, they say they see ladybugs.

I am a Broadcast Journalism major at Penn State University where I have gained experience working in both radio and television. I work behind the scenes producing radio shows and television features. In addition, I host the Penn State talk show “The U”.

A tea party fit for Queens