Karl Deans is a 35-year-old father and husband who lives in West Chester, Pa. He’s one of five children who grew up in a middle class family, raised by his single mother, and grandparents, living a very free and relaxed lifestyle. He says he began using marijuana, alcohol, and cocaine at the early age of 13.

Deans was a local drug dealer selling drugs during his high school years and early twenties, until around the age 26 when his (now fiancé) got pregnant with their daughter Amaya. However, Deans was still in the drug dealing business, but wanted to make a better life for himself and his family and he knew he had to make a change in order for his daughter to have the world.

After a few incidents at home, having people knocking on his door at early hours in the morning, interventions/fights with his family and fiancé, he finally decided to see a military recruiter to help get his life back on track. When he met up with the recruiter he was informed that there was a warrant out for his arrest a year prior for selling cocaine to an undercover cop.

Unaware of this warrant, Deans went to the local police station to straighten out the matter. When he arrived to the station the police arrested him on the spot, Deans had multiple drugs in his coat pocket when arrested.

Released a couple hours later, he decided to invest in a lawyer to help his case. His lawyer worked out an agreement with a known rehab facility called Teen Challenge in Philadelphia. Teen Challenge is a religious oriented rehab facility for men and young delinquents trying to find the better path and lifestyle. While Deans was there, he said he found his way back to God and restored his faith.

Once he had completed the program, Deans enrolled into University of Valley Forge, where he was studying to become a social worker. While Deans was enrolled in school the court sentenced him to serve two to four years in state prison for his charges. Deans transferred between three different state prisons but ended up completing his sentence at the Chester State Prison. During his time in jail, Deans says was reluctant to receive letters, phone calls, and visits from his friends and family. 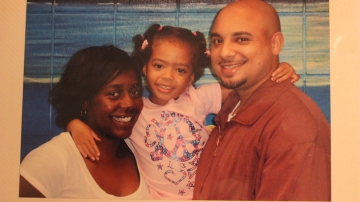 His fiancé, daughter, friends and family were there to support him throughout everything. While he was away he missed out on his daughters first and second birthdays along with her first words, learning how to walk, and grow in general.

Deans says that he is thankful to have gone through the rehab program and found his faith in God, if he was just taken into jail straight off of the streets he believes that he wouldn’t be where he is today.

Deans served an 18-month sentence due to good behavior. He was released in June 2012, and was let back into the College to complete his degree. He has now been eight years sober with a degree in social work and political science. He works two jobs, where he is a chauffeur, and a serving at an up-scale restaurant in Newtown Square. Deans said that he is also working towards a possible masters degree and opening up his own business.

Deans says that he and his fiancé are looking at a possible wedding in late 2016.

Video: A Blessing In Disguise

Deans mother Carol Baker explains why supporting a child or family member during difficult times such as going to jail is so important. She also explains where Deans is today (recovery wise) and how proud she is of her son and his recovery.

Senior at Pennsylvania State University studying in the College of Communications, earning a B.A in Broadcast Journalism with a minor in the College of Engineering: Entrepreneurship and Leadership Innovation New Media Cluster. Passionate in pursuing a career in the entertainment industry and multimedia production

A Sister In Harmony