College can be a major adjustment for students who are away from home and are in an unfamiliar place. Annie Ney, is among the students who have experienced situations far more traumatic than missing the bus or getting a bad grade on a final.

Ney is a senior at Penn State University majoring in Telecommunications with a minor in Communications Science. She was nervous at her new school and wanted to make friends as a freshman. She clicked with a guy who had similar interests as she did and thought of him as her first friend.

Four days into her college career, she was playing Mario Kart with him in her room. He proceeded to molest her, leaving her traumatized and unsure of what to do next.

She did not want to reach out for help at first, but with the help of her resident assistant, she knew it was the best option.

“Penn State does do a really great job of making you aware of where you need to go in a crisis, but I don’t know. I was just too afraid. I was 18 years old and alone,” Ney said. 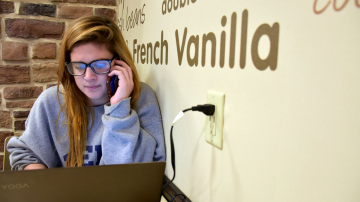 Ney would call her mother nearly every night to comfort herself, while her mom did not even know her reason for calling. Ney would tell her mom the reason she was calling was because of her recent breakup with her boyfriend, who moved to California.

Ney’s RA overheard her talking to a friend about the incident and told Ney she was required to report the issue. Her RA contacted campus police and they started the reporting process.

Ney had to be questioned by the campus police.

“The police officer was really nice and all, but it was hard to tell a man the things I went through and give that kind of information," Ney said.

The university started sharing reports that a sexual assault occurred in Ney’s building on her floor. She was scared to have such information released because her aggressor would find out that she reported him. She stayed in contact with him just so he would not be suspicious of her. “I was almost afraid of him," Ney said. She did not want him to think they were no longer friends. She even found posters on campus about the incident and would tear them down and put them in her backpack.

Ney went out one night with friends from home and they started catching up and swapping stories. Ney broke into tears and called her mom to come to her rescue. Her mother asked Ney what was wrong. Ney pulled one of the posters from her backpack and showed her mom. Her mother, in confusion, read the poster and asked if it was about Annie. She answered with a simple ‘yes.'

Her biggest fear was telling her dad about the incident.

She could hear her mother down the hall in their small New Jersey home talking to her dad. His reaction and tears brought Ney to her knees, as she never wanted her dad to feel guilty for sending his daughter to college.

“It’s one thing to make me sad, but don’t make my dad sad for sending me here. I love Penn State," Ney said.

Ney started the process of finding justice for herself, but she still felt guilty for potentially exposing her aggressor because they were friends. The campus police worked tirelessly with her and would check in on her to make sure that she was doing well. Ney was directed to a woman in charge of Title IX issues at Penn State. The police urged Ney to say her aggressors name to someone, as it would help her receive further justice in her fight.

In that same week of telling her parents what had happened to her, Ney said the guys name. “I was relieved”, said Ney. The guy kept denying the story that Ney told and said it was a lie. The hardest thing for her was to face her aggressor in the hearing. Eventually, he was kicked off of campus and dropped out of school.

Ney was talking to a friend and learned the same guy that did the same thing to her. Ney was devastated and blamed herself for not reporting him sooner. For the longest time she wrestled with the thought of him taking advantage of someone else.

Ney became close with a girl on campus who went through a similar situation, but the girl never reported it. Her friend encouraged Ney to fight and to get justice for the both of them.

Thanks to the help of campus counseling, friends and family, Ney said she has been able to receive the advice and confidence that she needed in that dark time.

Ney prides herself on her inner strength and personal positivity that she developed as a young girl. She now advocates for those who have similar stories. Ney has become a personal contact for women who were also sexually assaulted. She gave her number out in a support group and allowsn people to call her in case they are struggling with their past or need an ear to hear their concerns.

With her personal life more stable, Ney is working as an intern at Seven Mountains Media radio station and is on track to graduate this month.

Video: Should assault be punished more severely than underage drinking?

Ney is frustrated with the way penalties are placed on a student’s school record.

If any student is in need of counseling, psychological services, or just an ear to listen, Penn State provides students the chance to visit the Student Health Center at no extra cost. There are also crisis hotlines and much more available at 877-229-6400 and located at 501 Student Health Center University Park, Pa 16802.

My career goals are to either be an on-air personality on a radio/television show or to become a famous musician and share my music with the world. I am currently interning at the B94.5 radio station and am excited to expand my skills for my journalism major.

The Life of a Penn State Puppy Raiser