Cameron Lincoln is a student studying telecommunications at the Pennsylvania State University. He takes classes in the Bellisario College of Communications just like your average college student, but there is something extraordinarily different about Lincoln. He served in the U.S. Armed Forces.

“The military has been a long-time tradition in my family,” Lincoln said.

He wasn’t joking around. Lincoln’s great grandfather and two of his grandfathers served in the U.S. Army. His father earned the rank of Buck Sergeant in the Air Force, a position that no longer exists today. It doesn’t stop there; the military presence in his family extends to aunts, uncles and cousins.

He never saw himself as smart enough to actually go to college and earn a degree. When it came time for Lincoln to graduate high school, he knew that he wouldn’t be taking the traditional route to college. He was tired of high school and all the work that came along with it. He just wanted something different, a change of scenery. Picking the military wasn’t a difficult decision at all, Lincoln said.

Ever since he was a little kid, being a soldier was something that he always dreamed about. He was unsure what branch he wanted to enlist in at first, but ultimately ended up choosing the Air Force. Lincoln credits his father for building up his passion for the military. His father only gave him one restriction.

“He was like, if you do one thing, don’t join the military police," Lincoln said, laughing. "I said okay, there’s a challenge.”

Naturally, Lincoln decided to join the military police, which the Air Force refers to as the Security Forces. After being deployed to Iraq, one of his first duties in the Security Forces was to be the gatekeeper for basecamp. This was a duty that Lincoln had to be certified for and was important in keeping his fellow soldiers safe. From there, he would get promoted to Staff Sergeant, where he would take on more law enforcement patrols.

After returning from Iraq, Lincoln received an opportunity for a position in Japan. Vehicle Noncommissioned Officer in Command would be his new title, and he was essentially in charge of watching all the vehicles in his squadron. He spent two years here, before transferring to the National Guard where he is currently stationed in Maryland. Now his duties are more Flight Sergeant oriented and he acts more like a supervisor.

During his time in the forces, Lincoln was able to travel the world and meet many interesting people. Perhaps the most important person he met abroad was his first flight lieutenant in Korea, a Penn State graduate who convinced him to check out the school. 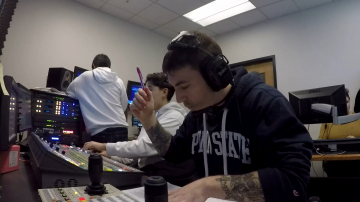 “He was talking it all up and he was a really good guy, so I was like, okay, let me check this out among a few other schools,” Lincoln explained.

At age 25, Lincoln decided to apply to Penn State. At first, he didn’t know what he wanted to study. He remembers getting the catalog filled with all of the potential majors, but he still wasn’t sure about what he wanted to do. He eventually stumbled upon telecommunications. Lincoln thought that this major was his best option because it seemed broader. He could see himself doing a number of different jobs in the television industry.

Lincoln eventually found that he really enjoys the behind the scenes work in  television, even after demonstrationg some skill in the more glamorous job of anchoring. He has been taking classes at Penn State for the last four years trying to perfect these skills. Currently, Lincoln is in an exclusive class called Centre County Report that produces live newscasts and broadcasts them to 27 Pennsylvania counties. Every week, he directs the show and makes sure that all of the control room technology is working properly. Some weeks, he even gets a chance to suit up and anchor the broadcast.

Lincoln credits much of his success to the military. He didn’t know what he wanted to do after being in the Security Forces for so long, but he learned that his supervisory roles really complimented his major. The military taught him valuable leadership skills that proved to be very useful in a stressful newsroom setting.

“Thankfully, with the help of my G.I. Bill, I was able to go to a great college like Penn State,” Lincoln said.

The G.I. Bill is designed to help Armed Forces members like Lincoln get an education outside of the military. This benefit aims to help servicemen and veterans cover most if not all of the costs of a proper education.

Video: A Family of Soldiers

Cameron Lincoln discusses how important the military is to his family.

Paul is in his final semester at Penn State currently serving as an Executive Producer for Centre County Report this fall. He is a member of the John Curley Center for Sports Journalism and has aspirations of becoming a reporter/anchor. Before coming to Penn State, Paul served as the Station Manager of WTLS TV-21 during his senior year of high school. Follow him on Twitter (@Paul_Toth9) or email him at .(JavaScript must be enabled to view this email address)