Known to the Penn State community as “The Squirrel Whisperer,” Mary Krupa has certainly made a name for herself not only around campus, but also around the world.

With her calming nature and passion for animals, she has befriended the campus squirrels by feeding them unsalted peanuts (to keep their cholesterol down) and making small hats for them to wear.

“They didn’t say anything out loud but later on they were getting interviewed and my mom said that she was concerned I may get bullied because that’s obviously not normal behavior. But everyone has been really accepting and it just makes them happy to see squirrels wearing hats,” Krupa said.

Fortunately, the original concern of her parents hasn’t been the case. Instead, everyone has responded well and even helped her rise to fame by viewing and liking her Facebook page. One picture in which Krupa put a leaf on the squirrels’ head for a natural look received 30,000 views. The page is up to 11,643 likes. 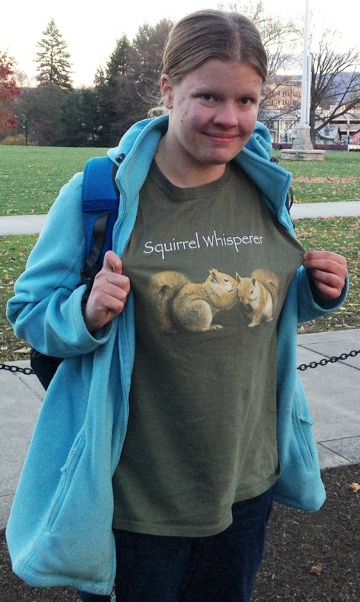 What started out as just a hobby during the summer of her freshman year has gained the sophomore global attention. She has been featured on several blogs including Buzzfeed and Tosh.O as well as international publications.  However, she says fame does not motivate her. Instead she uses it as a form of relaxation.

At one point, she could not finish her schoolwork because so many reporters wanted to interview her. Now, she has learned to plan ahead.

Krupa was originally a Wild Life Sciences major but after realizing it required an extensive amount of math and science, the sophomore is planning to switch her major to something within the College of Communications. She hopes to use her social media skills to land a job in the field of animal advocacy and environmental issues.

Whenever Krupa thinks of a new hat idea, she goes home and searches the Internet for hat templates. She then edits the colors in photoshop and scales them down to fit on the crown of a squirrel. After that, she cuts out the template and glues it together to complete the hat.

The State College native always uses the lightest material to make the hats so that the squirrels barely notice it’s there. She has also used her creativity to incorporate shoes into the pictures.

Krupa's favorite hat is one that she found at a yard sale for a doll - the Santa Claus hat. The squirrel whisperer is constantly looking for new ideas to add to her collection and takes suggestions from others. One student has even knitted a tiny red hat for the squirrel.

Although it may be hard for the average person to tell the difference between the different squirrels, Krupa says that she can tell by looking at the top of their heads, where there are different indentations above their eyes. Her favorite squirrel lives around Old Main. She named him Sneezy after hearing him sneeze one day.

Watching the squirrel whisperer in action is an unusual and slightly hard to believe experience. Penn State students Bryan Owen, Allison Kearney, and Faith Sykes all discovered Krupa through social media and the attention she was receiving last year through national sources. Listen to their reactions to the squirrel whisperer.

A former student-athlete from Durham, NC who has a passion for sports and story telling through writing and video production. I would love to one day be a sports producer or reporter at a large network.