Stand Up For Sean McGowan


Sean McGowan says he was an outgoing and talkative kid growing up in the Philadelphia suburb of Downingtown. Watching The Simpsons with his father was one of his favorite past times, and he began to dream of becoming a comedian.

McGowan got older and made his way to Happy Valley. Being a comedian was still at the top of his bucket list. As a Penn State freshman, McGowan joined Alpha Tau Omega and became involved in Penn State’s Dance Marathon. 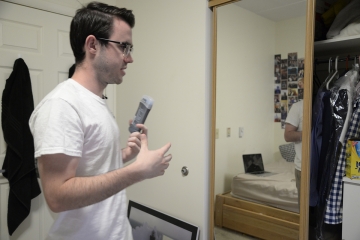 McGowan’s pre show preparation consists of hours of practicing his set in in front of a mirror allowing him to get a feel of what it will sound like on stage. Photo by Emily Casey

During his junior year, McGowan says he become overwhelmed with his engineering work and needed a creative outlet to let off some steam. He took a chance and went to an open mic night for Penn State’s stand up comedy club, Second Floor Stand Up. Although McGowan says his first performance was horrible, it didn’t stop him from coming back and improving his art.

A year later, McGowan is now part of the Second Floor Stand Up Comedy Club and has extended his love for comedy to writing for PHROTH, Penn State’s satirical newspaper. He continues to evolve his comedy while performing on campus and as far away as a club in London.

Stand Up in Action

Every other Friday, Second Floor Stand Up puts on a show in Carneige Cinema. McGowan says he admires the different styles of comedy that are shown during the show and loves the fact he gets to perform his set, but that doesn't mean this seasoned performer doesn't still suffer from pre-show jitters.


McGowan says he will be pursuing a career in engineering in Austin, Texas. He say he is excited to continue to perform stand up and to see what the Southern comedy scene has to offer. He is also applying to become a contributor position at The Onion, the popular satirical publication.

After I graduate from Penn State, I would like to pursue a career in multimedia entertainment journalism.