Standing up for sexual violence awareness


Like many young adolescents Jasmin Enriquez was eager for all that she was about to experience during her four years of college. She was leaving her family and her comfort zone and moving across the country where she was ready to explore the world and all that life had to hold for her.

However, just a few months into her college career she experienced something that  is far too common. Enriquez was sexually assaulted. It was not until the following year, during Women's  Studies class that she realized what had happened to her. She knew more people had also been assaulted and decided to bring light to a very tough and emotional subject.

She decided she had to make a change. She admits that she didn’t know where to begin at first but knew something had to be done.  Enriquez’s sophomore year she went right to the fraternity where her assault had occured and told them what had happened.  Afterward she realized that she could not stop there and  had to bring awareness to the university. 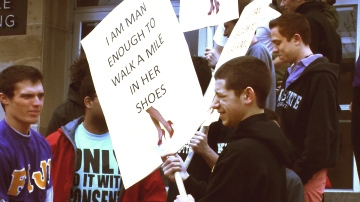 Enriquez founded Sexual Violence Awareness week  at Penn State as sophomore. Her mission was  to get everyone aware of sexual violence and how it is not just a women’s issue.  Enriquez made up shirts that say “Only do it with consent, stop sexual violence” and created a full week of events.

Nearly two years later the week has doubled its participants. This year there are multiple events that take place every day such as a “Walk a mile in her shoes”, where males walk a mile from the Boucke building steps to Atherton and back in high heels.  The message is to simply state that they are here to stop domestic violence and that it is not just a female issue.  This year Enriquez has already handed out over 3,000 shirts, far more then she could have ever imagined.

One of the main reasons that Enriquez has chosen to be so open about her encounter with sexual violence is because it allows others to be open as well. She said that she too was embarrassed at first to talk about it, but that she now realizes that there is nothing to be embarrassed about.  It is an issue that affects everyone.  Enriquez said that statistically one in four women will be sexually assaulted.

Enriquez said the more she opens up about her experience the more other people tell her about their experiences.   She says that it sickens her that so many people have to deal with the issue, but that only gives her more drive to be an activist for her cause. Enriquez hopes that one day there will be no more sexual assault incident. Until then she will use her voice to  get her message out there.

After a tough week physically and emotionally Enriquez reflects on how she is making a difference. She had always hoped that she was making change but this year she became overjoyed when a friend came and told her that she too had been sexually assaulted years ago.  Through Enriquez's efforts she finally felt comfortable to talk about it.

Alex is a senior studying at the Penn State University majoring in Broadcast Journalism and minoring in Communication, Arts and Sciences. Throughout her college career Alex has worked for the University’s student run paper as a part of the sports staff.  She covered women’s gymnastics and field hockey as well as Track & Field. She has taken classes, which helped her put together weekly radio television shows as well as packages for television.  Last summer Alex interned in New York City for The Bill Cunningham show during their second season. There she helped the social media department put together their new website as well as assisted the production team in booking shows.  Alex’s dream job is to one day be a producer of a well known television show.

Home away from home