She’s been in more than 150 shows. She’s sung at the Apollo Theater in New York, and she has recorded one CD with another in the works.

And State College resident Hannah Richardson is only 12 years old.

Originally from Waynesboro, Hannah started singing and acting when she was six years old.

“I started singing at church and I really loved that,” she said. “They did this musical called ‘Once Upon a Parable’… and I really, really liked it.”

Soon after, Hannah moved on to shows at a dinner theatre, where she performed in more than 150 productions.

Currently, Hannah is trying to produce a second CD and is working with the Shirley Grant Management company, which works with children 18 and under, her father, Matthew Richardson said.

Last summer, the agency sent her on an audition for the new Into the Woods movie, starring Anna Kendrick, Johnny Depp and Meryl Streep, he said.

“At 12 years old, it’s hard to believe she has six years of experience and 300 plus live shows,” Matthew said. “It’s been a great education for me and my wife. None of us are in the theater business or have a background in theater or music so we have learned a lot along the way.”

But life for the family of four is not always easy.

Matthew and his wife, Laura, spend many of their days shuttling Hannah to rehearsals, auditions and gigs as well as driving their son, Sam, to sports practices. 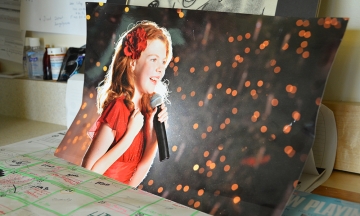 For awhile, Matthew said the family flew back and forth to Nashville, and then started driving about once a month to New York City when Hannah was performing at the Apollo Theatre.

For Laura Richardson, Hannah’s mom, her life seems like it’s “day by day” and always switching.

“It’s hard to swing who is going to be where when. It pretty much takes over your entire life as a parent,” Laura said. “You do the best you can and try to provide opportunities for your kids. Sometimes we have to say no. I don’t like saying no, but sometimes we have to.”

Hannah is cyber schooled to accommodate for her hectic schedule. She said sometimes it can be difficult to find times to see her friends and neighbors.

“I have some friends and a lot of the times they will come over and I’ll say, ‘Nope, I’ve got filming later’ or whatever it is,” Hannah said. “It’s a bit hard, but for me, most of my friends are with the commitments I’ve been making, like with these theater productions.”

But she is still a normal 12-year-old girl, Michael said. She has her dolls, she has her bicycle and she has her sleepovers – and he jokes that Hannah doesn’t always “have a microphone attached to her face.”

However, both Matthew and Laura agree that watching Hannah perform is a moving experience as parents.

“I can hear her every day in her room,” Matthew said. “But sometimes, when it’s all put together with the lights and whatever she might be wearing and that crowd…and you are standing beside people who don’t know it’s your daughter, it makes you very proud.”

Currently, Hannah is rehearsing for “A Midsummer Night’s Dream” by William Shakespeare as part of the State College Community Theatre. She has one of the lead roles – Helena.

Hannah’s director, Susan Riddiford Shedd, said Hannah has a lot of natural ability. There is a quality about Hannah, she said, that harkens back to the movie stars of the “olden days.”

“She is very polite and she’s somebody you want to work with. She has a charisma,” she said. “And then she started acting and she’s amazing. She could handle the language really well.”

For Hannah, a future doing anything involved with the arts is a dream. She said she would love to be somebody “like a Taylor Swift,” while also pursuing acting onstage and in film.

“I could see her doing, quite frankly, anything and then possibly even moving into doing something to benefit the world,” Laura said. “I know she’s got that humanitarian piece of her as well. I think the world is her oyster.”

Listen to songs off Hannah Richardson's most recent album. Hear a preview of her sing "Everything's Coming up Roses" and one of her original songs, "The Boy Next Door." Her album is available for purchase or download at Amazon.com.

Kristin Stoller is a senior from Newtown, Conn. majoring in print journalism with minors in French and theater. She is currently the managing editor of The Daily Collegian, Penn State’s independent student newspaper. She has interned as a reporter with USA Today, the Hartford Courant and the New Haven Register. Most recently, Kristin placed seventh out of 148 students in the Hearst Journalism Awards Feature Writing category for her story on the people of Newtown, Conn. after the tragic shooting.