STATE COLLEGE, Pa. -- Wednesday, September 16th, 2015 should have been the happiest day of Maurisa Smeltz's life.

Instead, it was the saddest.

Smeltz's son, Carter Christopher Kopesky, was delivered at 11:42 P.M. Approximately nine hours prior to that, Smeltz and her fiancee Matt Kopesky were told that their son had already been lost.

“We’re 40 weeks and 6 days. You’re right there, at the finish line. How does that happen? How?” Smeltz said. 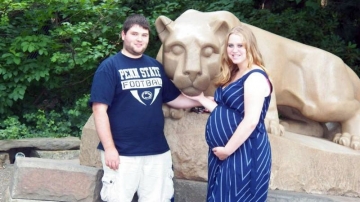 Maurisa Smeltz and her fiancee Matt Kopesky at the Lion Shrine on Penn State’s University Park campus just prior to their son Carter’s birth.

"I never got sick, never had any single problem. My pregnancy was extremely blissful and happy. I just really enjoyed it. I really loved being pregnant and it was such a magical time,” Smeltz said.

“During his ultrasounds he always looked healthy. He was always so active. I would look up on the screen and I would see him kicking around, and I’d feel it at the same time.”

When Smeltz went into the hospital to deliver her son, “it was just like any other doctor’s appointment when they were checking our vitals at first. After about 10 seconds, I started to get concerned, because they weren’t finding the baby’s heartbeat,” said Smeltz.

“I really became scared about 30 seconds in, when the doctor brought in the ultrasound machine,” Smeltz said.

“It didn’t take the ultrasound technician but maybe three or four seconds to look at it and say, ‘I’m sorry, we lost him.’ She just had tears welling in her eyes,” Smeltz said.

“I was in a state of shock at the time, I couldn’t understand how in the world, and I just remember screaming, I just shouted ‘No!’ at the top of my lungs.” 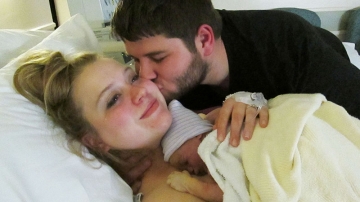 Smeltz said her doctors told her that the baby's umbilical cord was probably to blame.

"I remember when he came out, and my fiancee was cutting the umbilical cord, and the doctor made a comment about the cord not looking good," Smeltz said.

The umbilical cord has three blood vessels to provide blood, oxygen and nutrients to support the baby. It also has an substance called Wharton's Jelly. The jelly provides insulation and protection to the vessels in the cord.

Smeltz and Kopesky were later told that the umbilical cord had less than the normal amount of Wharton's Jelly. That, combined with the possibility that Carter may have sat on or pinched the cord just prior to labor, contributed to his death.

Despite the fact that he was stillborn, Smeltz said she was still overjoyed to finally see her son.

“He was so beautiful, and he’s so handsome and so healthy. He has big hands and big feet. I think he got that from my side of the family,” Smeltz said.

“I just remember his cheeks were so rosy like mine. Throughout my pregnancy, I was the typical glowing pregnant woman. That just reminded me of myself, too. But I think a lot of his facial features reminded me of my fiancee, so that was cool.”

Smeltz said the staff at the Mount Nittany Medical Center did the best that they could to make Carter’s birth as normal as possible. They allowed Smeltz, Kopesky and their families as much time with Carter as they wanted, and provided them with diapers and clothes to put on him.

“They took so many pictures of me and my family holding him. They even let us dress him in his going home outfit.”

The hospital also brought in a chaplain who baptized Carter before he was picked up by the funeral home the next day, and provided the family with a new outfit for the baptism and burial.

“He was put in one of those for his baptism, and that’s what we decided to bury him in too, so it was absolutely beautiful.”

The nurses who were on shift during and shortly after Smeltz’s labor and delivery got together a memory box for the family and filled it with items to remember Carter by.

Smeltz sang and played the guitar through her pregnancy and would often feel Carter kick when she did. When she lost her son, Smeltz decided that she would still sing to him.

“I’ll be damned if somebody is going to take that away from me,” Smeltz said.

At Carter's funeral, she sang Carrie Underwood’s “See You Again.”

“I didn’t cry the whole funeral until after I sang the song. I know that it was God that got me through that. After, I just remember bending over his casket and just sobbing and sobbing and sobbing, and that was hard. But I was really happy that I got to do that for him.”

Smeltz is currently involved in a support group for infant loss and infertility, which has helped her get through the past several months since the loss of her son. The grief that those in her support group share is a kind that only they can truly comprehend.

Smeltz and Kopesky still plan to start a family again some day. Smeltz said that she is somewhat nervous, and will be extra cautious during her next pregnancy, but added that she knows that she was meant to be a mother.

“The way I was brought up, I was always taking care of my siblings, and my friends always called me the mom. When I moved away, I really missed being a caretaker and I wanted to have someone to take care of again,” said Smeltz.

“I still want that some day with another child.”

Smeltz said she knows that no child will ever replace her first son, and said that she will still love him with all her heart.

“My grief didn’t end there. It doesn’t end, ever. It’s never going to end, it just changes.”

Smeltz and Kopesky may not be ready to have another child just yet, but they have found another way to expand their family.

Melanie Micchelli is a member of Penn State’s John Curley Center for Sports Journalism and is an active senior member of Penn State’s chapter of the Association for Women in Sports Media. She is involved in PSN-TV’s Penn State Sports Night and was in intern at local radio station B94.5 in the fall of 2015. Upon graduation, Melanie plans to move to New York to work in sports media and would love to work for the YES Network in the future.