Story posted May 6, 2015 in News, Hong Kong by Marissa Stern 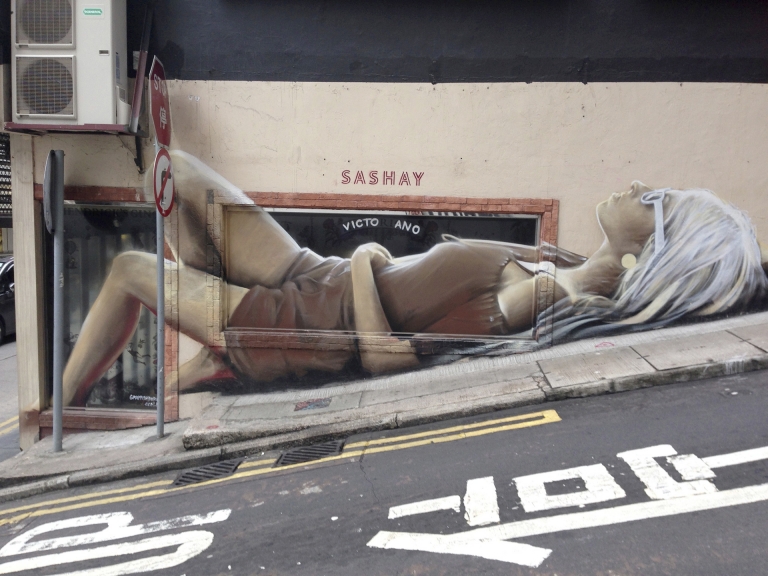 A painting of a reclining woman by street artist Victoriano extends along the wall of restaurant Sashay on Hollywood Road. Karen Davies, owner of the Hong Kong pop-up arts space Lot 5,  says this is her favorite piece. Photo by Marissa Stern


HONG KONG – For a week or so every spring, this city built on trade, finance and the making of money gives itself over to the arts.

Hong Kong Art Week pulls together the threads of the city’s arts community into a glittering tapestry celebrating, at once, the best of Hong Kong’s 230 art galleries, over 100 local and international performances of theater, dance, opera and symphonies, the spring edition of the Asia Contemporary Arts Show and Art Central, and, the latest addition to the list, a new contemporary art fair on the Central Harbourfront. 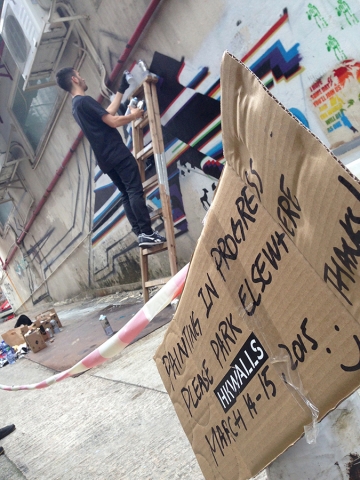 But not far away in the Sheung Wan neighborhood of Hong Kong Island, another, wholly different kind of arts scene – one not always welcome in Arts Week – is thriving despite official ambivalence, legal obstacles and even the criminal law.

This is an arts scene that celebrates forms of expression found more often on the streets rather than inside galleries, and features artists whose definition of self-expression can sometimes mean invading the rights of others.

And now, they have a festival of their own, HKWalls, intended both to display the works of street artists and find a way to do it without running afoul of Hong Kong’s laws against defacement of private property and vandalism.

“I think it’s good for the culture of Hong Kong,” said Jason Dembski,  one of HKwalls co-founders and an architecture professor at Hong Kong University. “It lets people see things that aren’t just gallery-driven.”

The festival celebrating street art comes as some in the Hong Kong arts scene are hoping that what much of the world regards as graffiti will be taken more seriously as art – or in the words of Karen Davies, owner of a pop-up arts space called Lot 5, “to legitimize something that is illegal.” 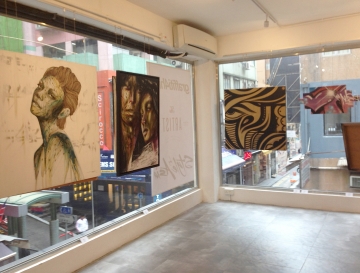 Work by local and international artists hang on the walls of pop-up space Lot 5 during street art exhibition “illicit/legit.” Photo by Marissa Stern

Davies’ Lot 5 played host to street art exhibition called “Illicit/Legit,” held on the second floor of the space, overlooking a bustling Staunton Street in the Central District. It’s a bright, white space whose walls in this instance were decorated with painted canvases and sculptures done by street artists.

“They all practice on the streets but they’re also very accomplished and talented artists,” Davies said. “It was basically bringing street art into four walls and being able to take it home, legitimately.”

What might make this year’s edition of HKwalls particularly interesting is its proximity to last fall’s pro-democracy demonstrations, known as the Umbrella Revolution, that brought thousands of Hong Kong students into the streets to demand free elections.

However, any art that emerged during this time was quickly cleaned out by the government, which strictly prohibits street art or any defacing of property without consent of the owner. Anyone who violates this law can face a fine of $500 ($64 U.S.) or up to three months imprisonment, or more if deemed “criminal damage.”

What has made HKwalls tolerable to the government this time is that willing property owners lent their walls to the participating artists, which Dembski and the HKwalls team painted over the week leading up to the start of the festival to provide a totally blank canvas for the artists.

The landowners who lend their property to HKwalls artists encourage the growth of this form of art (or “just don’t care,” said Dembski), which is the opposite of what the Hong Kong government practices.

With the permission of the property owners, the artists are free to paint it anyway they choose, which is the legal way to do it.

Whether the tolerant attitude will remain is an open question, and one that is crucial to the future growth of street art. 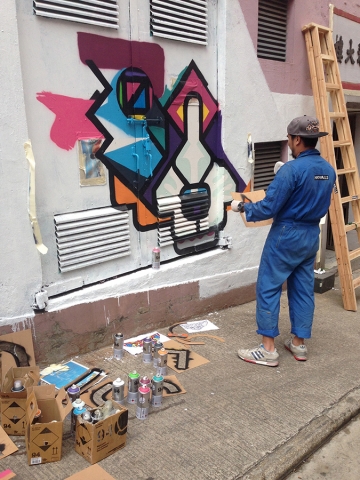 Thai artist Rukkit Kuanhawate at work on his painting during HKwalls. Photo by Marissa Stern

John Aiken, visual arts director at Hong Kong Baptist University, said he doesn’t think street art will be what Hong Kong is noted for as it hustles to become known as a global hub for the arts alongside New York and London.

“There’s not much opportunity to do it here,” Aiken said, citing why street art hasn’t quite taken off. “It hasn’t achieved that kind of cult status that it does in the States or Britain.”

And, says Aiken, given the opposition from the government and the crowded nature of Hong Kong, it is unlikely it ever will.

“If any graffiti does appear they paint it out very quickly,” Aiken said. “Within a day it’s painted out. It hasn’t got the time to be noticed. . . it never gets out of hand. It never becomes established.”

Davies disagrees. She says there has been a surge in street art in Hong Kong and expects it to continue.

“It’s quite a burgeoning scene in Hong Kong in recent years,” she said. “The preservation of street art is quite strong. There’s quite a positive outlook on illicit art that’s created it.”

Laws against street art have not significantly slowed the growth of street art, Davies said. If anything, it adds to the “thrill” of creating something and potentially getting caught.

One artist for whom the thrill may have worn off is Peter Yuill, a street artist from Toronto who has lived in Hong Kong for five years. He said he had been doing graffiti since he was 14 years old, but has since moved more to fine arts because he grew weary of “being arrested all the time” for his street art.

Working against the street art scene in Hong Kong, Yuill said, is the city’s extreme density.

“Everything is so dense, the buildings are so tall and packed together that you really don't have that many spots to hit, so the city doesn't get crushed like a lot of other places,” he said.

What has deterred some has attracted others, though. 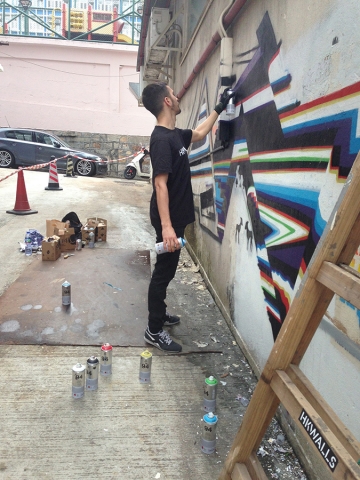 Felipe Pantone, a native of Valencia, Spain, is one of 30 street artists displaying their work here.

He started doing graffiti art in 1998 and it quickly morphed into something he knew he wanted to do as a career. He makes money by taking commissions for different projects all around the world.

“I was a kid. I was seeing graffiti on the streets, and I thought, ‘I have to do this,’” he said.

Dressed in a black t-shirt that reads “HKwalls” and matching black pants, Felipe Pantone faces the wall before him, armed with spray-paint. Thick, black lines and abstract shapes are sketched on the wall, partly filled in with vivid reds and blues.

What looked like an optical illusion from the lines and geometric patterns of the graffiti piece instead forms “PANT,” his trademark style and artist name.

“It’s a way to give art to everyone in an immediate way and for people that don’t go to galleries, they have it in front of their eyes for free,” Pantone said. “In the same way you have advertisements and then you have art. In a way, I don’t want to force anyone to see art but on the other hand, I like to put it everywhere for people to look at.”

All throughout the neighborhood stretching to the Stanley Market, more walls are being painted over by artists participating in the festival.

Those participating in HKwalls were protected from getting in trouble for potential vandalism as private landowners “donated” their walls for artists to paint over any way they choose. However, the property owners retain the right to paint back over it.

Artists from France, Italy and Spain were also at the event opening and some of their works are hanging on the gallery’s walls.

One such work is a portrait of filmmaker Alfred Hitchcock picking his nose done by the Spanish graffiti artist, Victoriano. The piece is done entirely in spray-paint and looks as real as a photograph.

His work can be seen all around the area. At the corners of Hollywood Road and Aberdeen Street along a steep alley on the side of restaurant Sashay, for example, is a spray-painted woman lying down, taking up a significant amount of wall space. It was done with the consent of the restaurant’s owner. 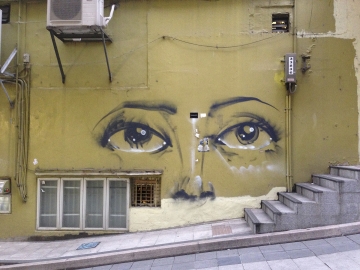 A blank wall transformed into art by Victoriano on the streets of Hong Kong in the Central district. Photo by Marissa Stern

On a bright yellow wall in an alley a few blocks away is another of his works. Two large, grey spray-painted eyes lifelessly stare across the street, invoking the image of the eyes of Dr. T. J. Eckleburg from “The Great Gatsby.”

Agreements with the landlords are what protects the artists and where they choose to express themselves. It becomes a legal problem if it is an un-owned space.

Davies attributes this new surge of art to a “creative peak” in Hong Kong. These artists are just using another form of expression that has become reflective of the city, she said.

“I think it’s an expression of culture. It gives depth to a city. Art is so wide. Even just the smallest thing is art,” she said. “There are so many expressions of art that street art is just another one of those kinds of expression.” 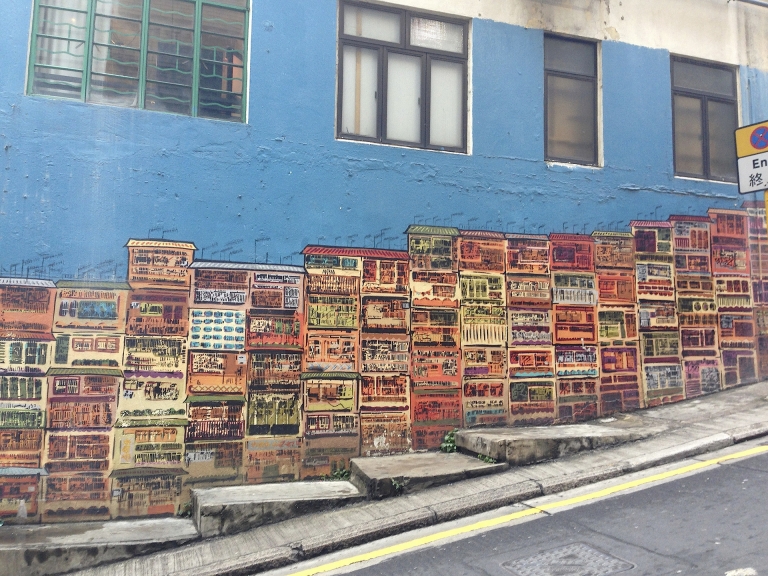 This street art display stretches along an alleyway in the Central district on Hong Kong. Photo by Marissa Stern
Tweet

Marissa Stern is a recent graduate who majored in Print Journalism and English. During her time at Penn State, she had been a part of numerous student publications including the Daily Collegian and Valley magazine. She hopes to continue writing, traveling and sharing stories.

The Price of a Free Press