Plastic Solo cups have long been considered a collegiate partying staple, used for drinks and for playing a variety of drinking games, such as beer pong, flip-cup, and slap-cup. Once the party ends, these cups usually just wind up in the garbage, destined to spend eternity in a landfill. Now, however, there may be an environmentally friendly answer for what can be done with America’s party cup after it has been used.

Josh Rappoport, a senior Biorenewable Systems major at Penn State University, believes that he has come up with a way to use science to transform used plastic cups into any product he wants.

“Basically, I want to turn Solo cups into a college product line, ranging anywhere from Ping-Pong balls and sunglasses to fraternity furniture like frat benches, a simple Frisbee, a Ping-Pong table and anywhere in between,” Rappoport said.

He said that his process to recycle plastic cups is a movement that college students can really get behind.

“Most people think that just because a Solo cup has a number six plastic resin code would mean that it’s recyclable, but that’s actually not in most jurisdictions,” said Rappoport. “So, I thought, there are so many Solo cups floating around college campuses that it’s a waste stream that I think our generation can really relate to, and see how we can close the gap on having Solo cups end up in a landfill.”

The transformation process begins with collecting solo cups from various fraternity houses in State College. Currently, Rappoport only collects from Alpha Epsilon Pi, but he is looking to collect from more next semester.

Once he has the cups, he uses an industrial washing machine to completely clean and decontaminate the cups. He then takes the clean cups and puts them through a dual shredder. Then he takes the cup fragments and “cooks” them on a portable coal-burning grill to melt the polymers and fuse them together.

“You might look at a Solo cup and see that it’s flimsy,” Rappoport said, “But if it’s layered and layered over multiple times, that’s how you get a hard plastic. 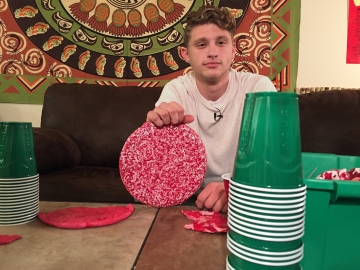 So far, Rappoport has only created sample pieces. However, he is working with engineering students to create metal molds for the melted plastic so that he can shape it into the products. The first mold he is working on is for a cornhole board.

Rappoport said he considers himself very environmentally conscious and has a real mission in mind for his idea.

“I want to show that sustainability can be cool for both the tree-hugger and the over-consuming standard college student who only cares about partying,” Rappoport said. “I want to show them that a Solo cup can come back into your life and doesn’t have to end up in a landfill."

"Most kids our age believe that to be sustainable, you have to cut back. You have to limit your energy use. You have to do less of this to save this, but you don’t. You can still be a regular college student and still try to have a real effect on the environment,” he said.

Rappoport said that he has never been as passionate about anything as he is for this project.
“I honestly believe in this idea more than anything I’ve believed in my entire life,” he said. “I’ve always been a project guy. I go in the basement, I lock myself on a project and I stay down there for hours, until I come out the next morning and it’s complete. I haven’t been able to have a project like that in years and I just needed an area for me to be able to harness my creativity and my type of intelligence, and this is something that I know I can make happen. It’s scalable; I believe in it, it just feels Josh to me. It’s just something that would make me so proud of myself.”

Rappoport said his short-term goal is to produce a frat bench by the end of next semester.

Rappoport explains how his journey through four different majors has led him to this project.

Alex Woodin is an experienced sports journalist with interest in play-by-play announcing as well as the business side of the sports industry.  He has previously covered sports for the Pittsburgh Post-Gazette, ESPN Radio, 97.5 The Fanatic and he also worked at an international news station called ICS in Shanghai, China.