While some students come to college and search for regular retail jobs or food service jobs on campus, Stoff Scott has his own unique job.

Stoff is a Washington D.C native who is currently a junior here at Penn State University. He’s a double major in Community Environmental Development and Recreation Parks in Tours and Management. With classes and work in his schedule he is also apart of numerous student organizations around campus, including The Outing Club.

Stoff says he's a very outdoors physical type of person. Coming to Penn State he wanted to find a job were he can not only enjoy the outdoors, but also interact with different people on campus.

A few summers ago Stoff was home on vacation without a summer job and no source of income. For many college students that is a huge disadvantage to enjoy summer vacation so Stoff decided to take matters into his own hands. 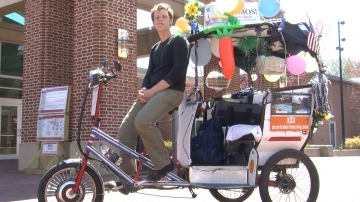 He took his bike and went out to buy a chariot to connect to the back of his bike and started his own touring service. He rode his bike around Washington D.C. giving tourist tours of national landmarks, museums and the best places to eat. He charged people no more than $10.00, but it really depended on how far his customers wanted to go.

Once he got to Penn State he noticed that someone was doing exactly what he was doing back at home and he figured why not continue and make some pocket money as well.

Usually you’d think that biking people all over campus would require intense physical training, but it actually doesn’t require that much time spent in the gym. Stoff bikes just about 40 minutes to an hour a day to keep his legs and stamina in physical shape.

On an average night he would get about one or two customers per ride, but on huge holidays at Penn State he would normally get three to four people per ride and that takes a lot out of him. To him the best part about being apart of Vamos Taxi Touring is being apart of everyone’s exciting night.

Stoff says that riding round playing music from the back of his bike taxi, honking his little horn, yelling “WE ARE” to students down College and Beaver avenues makes his nights fun. You could only imagine the things he’s seen and heard riding around campus.

Usually most of Stoff's routes are done around campus, but occasionally people ask him to go a bit further.

I am currently a senior at The Pennsylvania State University. I will be graduating in August 2014, I have a strong passion for talk radio, multimedia production and television production. So far I have had experience with working at a student run radio station called ComRadio as well as The LION 90.7 FM. I’ve also have gotten the chance to intern for Forever Broadcasting as Promotions/Programming intern. After I graduate I hope to obtain a full time job position with the Entertainment/News industry where I can demonstrate my work experience and skills and gain strong valued networking connections along the way.

Informal Balance: Creating New Apparel for the Love of Art