A little over a year ago PSU senior Fatima Kumala, was hanging out with two friends when they came up with the idea to start a fashion organization at Penn State. The girls noticed that Penn State had an array of student organization and clubs ranging in everything from Humans vs. Zombie’s to a Harry Potter inspired Quidditch Club. What Penn State didn’t have was an organization dedicated to fashion, beauty, and empowering women from the inside-out. The girls eagerly began to develop the constitution for Beyond Expectations Fashion Org.

In the fall of 2012 BE had the three founding members. Now there are about 20 dedicated members helping Beyond Expectations to host programs and workshops for Penn State students.

In April Beyond Expectations hosted their first “BE Week,” dedicated to the fashion forward student.The week began with “Black Hair: The Male Perspective,” a program that consisted of an all male panel that discussed the mysteries behind a black woman’s hair. In collaboration with Penn State’s L.O.C.K.S. (Loving Our Curly, Kinky, and Straight hair) students were invited to add to the discussion by asking question about hair care, styles, and techniques.

The next event was Celebrity Jeopardy, which was exactly how it sounds. The categories included Fashion Labels, Awards, Reality TV, and Celebrity Facts.

“You Are What You Wear” was a program in collaboration with P.O.W.E.R. (Progressing Our Women through Empowerment and Reverence) that shed light how women are perceived and judged by what they wear. 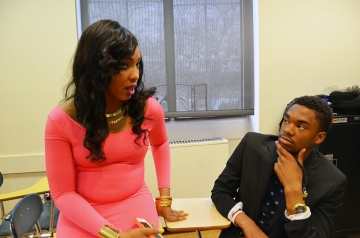 BE Week ended with a fashion show “Fire and Ice.” In preparation for the fashion show, models participated in workshops where they learned how to walk like a model and choreography for the performance aspect of the show. BE also hosted a Do-It-Yourself tie-dying workshop where students were invited to learn how to tie-dye. Some of the projects were featured in the fashion show.

The Fire and Ice fashion show is a completely student-run production. Members of BE designed and created their own outfits, collaborated on choreography, and put on a captivating production with flashing lights, music, and of course fashion.

Kumala shows how to make a cute and quick accessory at home just in time for Spring!

I am Penn State Alumnus with a bachelor’s degree in Journalism, broadcast emphasis. I am an entertainment enthusiast. I thrive off of fashion, music, celebrity, film, TV, books/comics, and sports. Popular culture is the at the core of my aspirations. I have the appreciation, skill, knowledge, and creativity required to produce interesting content on a digital media platform. I am educated, competitive, creative, ambitious, and very dedicated to all tasks that I take on. I am always cultured in politics, social media savvy, educated on national and international events, and ‘in the know’ of everything popular culture.