Cierra Hussey may seem like a regular college student, but her life is not regular at all.

Starting at Penn State Harrisburg’s branch campus, Hussey was determined to make it to Penn State’s University Park to continue her major and dream as a broadcast journalist. Limited to certain classes at her branch campus, Hussey knew that in order to reach her dreams she was going to have to work hard. In fall of 2013, Hussey was accepted into Penn State’s University campus. Husseys first semester at State College as a junior was a success and she couldn’t be more proud of herself. 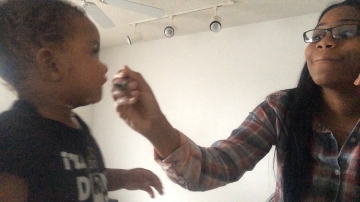 In fall semester of 2014 Hussey found out that she was pregnant and due to have a child in October. Ecstatic about the exciting news of her new bundle of joy, Hussey knew how hard it would be raising a child alone in school. She was determined to not be another statistic because being from Philadelphia, there is a huge reputation for college dropouts and she refuses to contribute to those numbers. As Cierra belly continued to grow she was not discouraged and she continued to go to classes and stay on top of her game.

In October 2015, Cierra gave birth to a baby girl named Hayden Hussey. While still in school Hussey was able to notify her professors about her situation and professors were very helpful by keeping her up to date with the course load during her absence. Surprisingly, Cierra took off only one month of school and came back with her newborn child. Cierra has dreams and aspirations and knows that nothing comes to those who wait so she packed her and her child up to continue to accomplish her dreams.

Being a full time student and a full time mom you are bound to run into some challenges.  Her main challenges were finding a babysitter and finding people she could trust watching her child. She knows that her support system is back and home and moving her and her child out here is a risky task, but Hussey has the drive in determination to build a better life for her newborn child. Eventually, Hussey enrolled her daughter into a daycare in State College so she could continue to go to classes. Hussey says “ I’m hungry, I’m on a grind for me and my child, I know I have to work hard for everything that I want and I have to grind 2x’s harder for my daughter because I’m not a quitter.”  Knowing everything that Hussey has at Penn State has made her determined to reach the finish line. Hussey has plans to graduate in fall of 2015 with her bachelor’s degree in broadcast journalism.

Hussey has only been a mother for six months, but she explains that she loves every second of experiencing motherhood. Although her child is so young, Hussey is eager for her to grow to share special mother and daughter activities.

Seeking a position in the field of broadcasting journalism where I can utilize my skills, abilities and experiences to ensure the company’s success. I am an ambitious and self-motivated individual who offers a variety of skills that would make me a valuable addition to your company.