Joshua Johnson is a senior telecommunications major at Penn State University. But he is not your average college student. Shortly after being accepted into the university Johnson began to worry about how he would pay for his education. Johnson tried a number of different jobs including babysitting, and working both in retail and food services. When working multiple jobs didn’t make ends meet Johnson decided to use his talent to raise money for his education.

Up until high school Johnson, like many African American males, had hoop dreams. Most of his free time was spent playing basketball he even attended a high school ranked number ten in the nation for basketball. He attended Wadleigh Secondary School, which originally was known for basketball but had been changed to a performing arts high school his freshman year. As an arts requirement Johnson decided to take tap. Because he caught on quickly and had fun while doing it, he kept up with it after high school.

Growing up in Harlem, wasn’t easy for Johnson because he didn’t have good grades he thought college was not an option for him. He said that applying for Penn State was a joke, and he only did so because his friends were also applying. When he got accepted he gave college a second thought. 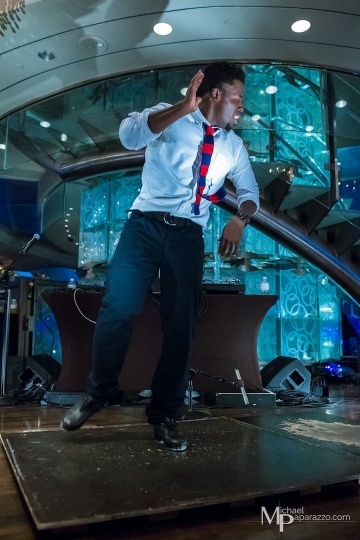 On weekends Johnson travels four long hours from Penn State University Park to New York City by bus, where he rides the subway train for hours and collects tips for tapping. His first time performing on a train was actually in New Jersey and not New York. He wanted to go somewhere where no one knew him. But after making a few dollars on a New Jersey train he decided to take his talents to New York City, where he was discovered and invited to make an appearance on The Ellen DeGeneres Show.

“It’s changed my life for the good I’m blessed to be able to do major shows,” says Johnson. Since being featured on Ellen DeGeneres, many doors have opened. In just eight short years of tapping Johnson has had the opportunity to perform on mainstream dance shows. He’s been featured on a series with Diane Sawyer, he’s performed at an Alicia Keys’ after party, and also has been featured on The Katie Couric Show. Johnson says he’s fortunate for these opportunities because he no longer has to destroy his body trying to impress people to give him money.

Johnson says that his motivation for continuing to pursue his education even without the good grades was getting accepted. Prior to attending Penn State, school was not important to Johnson. He rarely attended class in high school and he was known for being the class clown. When he got accepted he realized that was school was something he wanted to pursue, so he went after it. The only thing holding him back at that point was paying his tuition.

“Finances couldn’t keep me out of Penn State,” said Johnson. No one in his family has yet obtained a college degree so Johnson is determined to be the first. His talent has changed his life for the better. Johnson is now a senior at Penn State. He plans to graduate with a degree in telecommunications next fall.

Before becoming a New York City subway tap dancer Johnson made money as a temp worker.

Kiona Dyches is currently a senior majoring in broadcast journalism and minoring in African American studies. She lives in Philadelphia Pennsylvania. Kiona is currently an intern for ESPN Radio 1450 in State College. She plans to graduate in May 2014. After graduation she plans to continue her education and pursue a masters degree. In the future, Kiona aspires to work as a reporter for a major news company such as 6abc or FOX.