The best wurst in State College


Every weekend Penn Staters have the opportunity to eat some of the best wurst they’ve ever had. Ken’s Best Wurst, sells hot dogs, sausages, and more to satisfy every student’s late night craving in downtown State College.

In 2011, Ken Baumgarten had a business idea. Initially, he had planned to set up a hot dog stand during daytime. He wanted something that was recession-proof, and something that would allow him to control his own hours and have some free time. His daughter, a former Penn State student, convinced him that the best time for his business  was at night. She suggested that if he could put up with the hours, and the drunk people, that there was a lot of money to be made catering to the nighttime crowd. Baumgarten is still in denial as to how his daughter knew to pitch this business plan, but went along with her idea. 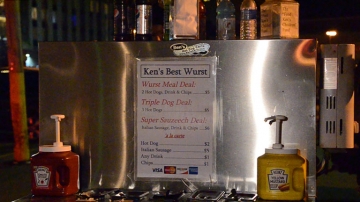 Every Tuesday, Thursday, Friday, and Saturday at 10 p.m., Baumgarten sets up his stand in the Garner Street parking lot, located near bars like The Gingerbread Man, The Lion’s Den and Bar Bleu. He says he considers setting up to be advertising - it lets people know that he’s out as they’re on their way in to drink. People take notice of him, too. Passersby walk by cheering excitedly, “You’re the man, Ken!” and “Ken’s a legend!”

“Those are some of my regulars,” Baumgarten says. It becomes clear that people seem to love Baumgarten, and not only for his triple-dollar deals.

In the beginning of the night, Ken makes his first sale to two (and probably only) sober customers. He tells the young men to follow him on Twitter, @KensBestWurst. His customer applauds Ken’s use of social media.

As a part of Baumgarten’s social media presence, every night before his shift, he tweets or posts on his Facebook an obscure vocabulary word, like cantilever or obfuscate, that must be used correctly in a sentence in order for customers to save a dollar.

“One of the things that I noticed was that a lot of my customers were sort of struggling with vocabulary and grammar,” he says. “I thought, ‘How can I give something back to the customers, and also slip in a little undercover education in the middle of the night?’ And so I just started putting the dollar discount word out there,” Ken says.

Ken also described one of the latest products he’s offering, what he likes to call “drunk shoes,” the foam flip-flops that are used at spas.

“So having some flip flops you can put on so that you can get out of your fancy shoes and stop hurting your feet, seemed like a winner.”

Baumgarten continues to serve hot dogs for customers and make conversation. He asks them what they’re doing tonight, where they’re going. He seems to genuinely care, too - something thats hard to find in today’s fast-paced, self-serving world. 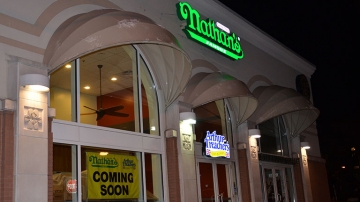 All eyes glance at the green illuminatied Nathan’s Famous sign less than 50 yards away. For a brief second, the small business seems overshadowed by the new, well-known restaurant. But Baumgarten doesn’t seem too worried. In fact, he welcomes the competition.

“I’m not afraid of competition, it makes everything better.” It is also likely that Nathan’s won’t be open until three in the morning.

As the night goes on, the line at Ken’s gets longer as customers are drunker. Some try to use the word of the day, and fail, miserably. Others boast about how close they are with Baumgarten - “I saw Ken at Barnes & Noble once; we’re good friends.”

Though most would hate to work late hours in freezing cold temperatures with drunk college students, Baumgarten seems to truly love his job - something not many people can say they do. “So what if 95 percent of your customers can barely walk? They’re having a good time, and so am I,” he says.

Video: Ken's Word of the Day


Ken encourages his customers to follow him on social media and find out his word of the day. If the word is used correctly in a sentence, customers can save a dollar on their order.

Wanda Crosby-Parsons: Not your normal hunter